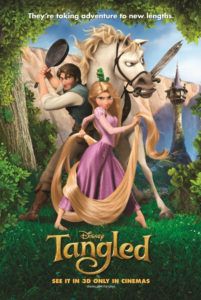 If only today’s animation studios would realize that timeless fairy tales need not infuse “hip” humor into the scenario for modern audiences to relate. Legends like Robin Hood and Sleeping Beauty are passed down by generations of storytellers and require no post-modern filter, as their range is everlasting, regardless of culture. Walt Disney realized this, and through his genius created equally timeless animated films like Pinocchio and Snow White and the Seven Dwarves. The studio hasn’t quite followed in his footsteps with Tangled, an animated take on the legend Rapunzel, as canonized by the Brothers Grimm. The studio’s efforts can hardly be called timeless, as twenty years from now, audiences might laugh at the very “2010” mannerisms of the production and characters.

Birthed from the post-Shrek school of snarky humor in a storybook setting, the movie, helmed by Nathan Greno and Byron Howard, the co-director and director of Bolt, places contemporary characters in a classicized setting. That is to say, not like Enchanted; rather, they act and speak like twenty-first-century people but come from a storybook. They could be you or me, as they speak with modernized lingo, such as “How you doin’?”—which suggests they have Friends in whenever/wherever this story takes place. When she burst into song, the protagonist’s valley girl style vocalized pause “like” can be heard. And don’t forget a sarcastic “…Really?” when a moment of unbelievable rudeness occurs. These incidents add up to the realization that screenwriter Dan Fogelman (Fred Claus) has more concern with cracking modern jokes than captivating the viewer through a period setting or fairy tale magic.

The story opens once upon a time, in a land far, far away, where the newborn princess is taken by a dastardly witch, named Mother Gothel (voice of Donna Murphy), because the babe has magical curative powers in her golden hair. The witch wants eternal youth, and only a special song makes the child’s hair radiate medicinal light. Cut to eighteen years later, when Rapunzel (voice of Mandy Moore) has spent all her life locked in a tower, her hair having grown to obscene lengths, since if her locks are chopped the magic goes too. Mother Gothel has lead Rapunzel to believe she’s her biological parent, and that she keeps her in the tower because the outside world is too dangerous. But, having grown into an impetuous teenager, Rapunzel communicates her desire for freedom through the typical “I Want” song method.

Enter the hero, a swashbuckling Errol Flynn wannabe named Flynn Ryder (voice of Zachary Levi), who stumbles upon Rapunzel after stealing the princess’ crown from the local castle. He’s your typical hipster bad boy, yet with a sensitive underbelly, that’s just waiting to be discovered by Rapunzel. Along with Ryder’s help, Rapunzel breaks free of her prison tower and heads toward the kingdom in a series of chases and song numbers and involved character twists. Royal police are after Ryder, Mother Gothel is after Rapunzel, and eventually Rapunzel and Ryder are after each other. Which brings us to the animals. Unlike most Disney movies, there are no talking animals in Tangled. But there’s a Royal horse named Maximus with tracking dog-like mannerisms out to find Ryder, and Rapunzel has a pet chameleon that exists in the story merely to fill the obligatory animal reaction shot.

Though pointless to discuss in a children’s film based on a fairy tale, issues of logic crop up when it comes to Rapunzel’s hair. The movie never quite pins down how much of it she has. At times, her hair seems a manageable length; other times it’s as though her flowing hairdo goes on for yards upon yards. Walt Disney had sketched some rough ideas for a Rapunzel story back in the 1940s, including a title character that used her lengthy locks like a growing utility belt. Here Rapunzel fashions her blonde hair into rope, uses it like a whip, and swings from it like a vine. Curiously, the movie never addresses how she keeps all that hair clean, despite its many uses. Walking around the forest along dirt paths is bound to build up some grime, yet never does Fogelman address how her hair keeps that Pantene shine. Then again, the movie doesn’t explain why her chameleon seems so all-knowing in its expression-only reactions either.

Though not advertised as one, the movie’s a serviceable musical with music and lyrics by Alan Menken and Glenn Slate respectively, but certainly nowhere near the iconic Disney standard of Beauty and the Beast and The Little Mermaid, nor even the toe-tapping sounds of last year’s Disney effort The Princess and the Frog. The strongest songs are those attuned to the mother-daughter relationship between the passive-aggressive Gothel and her loving would-be daughter, and the manipulation that Gothel causes. The one-note Ryder character has little motivation, making his “I Want” song contribution dull when a pub filled with ruffians and scallywags sing about their strangely dainty desires in the movie’s best tune, “I’ve Got a Dream”. Any one of these heart-filled thugs has more character drive than Ryder.

As the animation goes, there’s some real beauty here. Toward the finale, a gorgeous sequence involving hundreds of floating lanterns proves nothing short of awe-inspiring. And yet, the rest of the animation is only functional, rarely carrying the viewer away into storybook mode. Photorealistic backdrops are populated by large-eyed character types that feel overly stylized for their environment. It’s all very bright and colorful, no doubt accentuated beyond the norm for the sake of 3D’s downfall dimming effect. Still, there’s no sense of wonder about the production, which resolves to draw audiences using familiar Disney devices and modern humor for a consumable, but in the end artistically vacant animation experience. Tangled remains a solid example of why Disney has resigned their crown as animation king to the likes of Pixar, and, dare it be said, Dreamworks.