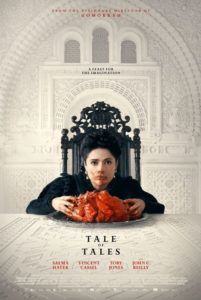 Cinematic fairy tales have been homogenized by Hollywood. In the last decade or more, studios have churned out a dozen live-action stories rooted in the Brothers Grimm, or at least Walt Disney’s retelling of them. Titles like Red Riding Hood (2011), Mirror Mirror (2012), Snow White and the Huntsman (2012) and its prequel-sequel, Jack the Giant Slayer (2013), Hansel & Gretel: Witch Hunters (2013), Maleficent (2014), and Cinderella (2015) all manage to look at feel the same. Aside from the occasional touch of violence or hint of sexuality, they each inhabit similar CGI-constructed worlds inhabited by CGI-animated creatures. They boast big-name celebrities and often feature better makeup and gowns than storytelling. Perhaps that’s why Italian filmmaker Matteo Garrone’s Tale of Tales comes as such a refreshing journey into fantasyland; it exists in another world not made of Hollywood artifice, embracing the full horror and humor behind folktales of this kind.

Better still, Garrone’s first English-language film doesn’t have the retreaded narrative familiarity of so many Brothers Grimm fairy tales. Its source material, Giambattista Basile Pentamerone, predates the Brothers Grimm by more than one hundred years. In his posthumously published masterwork The Tale of Tales, or Entertainment for Little Ones, Basile wrote fairy tales that venture into the macabre and even base, making the most twisted moments authored by the Grimms seem like fluff. Basile’s several-volumed tome first appeared in Naples in 1634 and was widely known as the Pentamerone. The book contains dozens of stories involving kings, monsters, fools, and peasants—all with something they long for, be it a sexual yearning, a desire for riches, or parentage. Some are harsh cautionary tales about desire, others contain a carnivalesque escapism.

Garrone and his writing team (Edoardo Albinati, Ugo Chiti, and Massimo Gaudioso) concentrate on a mere handful of Basile’s stories, alternating amid three nearby kingdoms throughout the film’s 133-minute runtime. In the land of Longtrellis, the well-intentioned King (John C. Reilly) tries to make his forlorn Queen (Salma Hayek) happy and give her a child, as they cannot have children themselves. They learn of a potential cure for childlessness after speaking with a mysterious figure: The King must slay a sea monster, extract its heart, and have it cooked by a virgin. Once the Queen eats the sea monster’s heart, she will become pregnant. But the procedure results in two albino children, and only one of them birthed by the Queen. As this and the other stories proceed, the film carries on over several years, following the often horrifying progressions. The characters from various stories may interact at a funeral or wedding attended by members of the other kingdoms, leaving their interwoven quality somewhat thin. No matter. The sheer novelty of these unfamiliar stories cannot help but draw our captivation.

Consider the storyline in Highhills, where the King (Toby Jones) is usually preoccupied with the happiness of his daughter, the Princess Violet (Bebe Cave), until he discovers a particularly talented flea. He grows obsessed with the flea-like a child, feeding it blood and uncooked meat until it grows to the size of a hog. Meanwhile, Violet wants to be married. And so, the King has the giant flea skinned after its death and promises to grant Violet’s hand to anyone who can guess the skin’s morbid origin. Leave it to an ogre (Guillaume Delaunay) to know. Elsewhere in Strongcliff, the ever-horny King (Vincent Cassell) grows tired of his orgiastic courtesans and becomes enamored by the voice of a peasant woman he sees shrouded from afar. He must have her. Little does he know the voice belongs to the wrinkled hag Dora (Hayley Carmichael), who manipulates her way into the King’s bed, much to the blind jealousy of Dora’s sister (Shirley Henderson).

Tale of Tales doesn’t look like an elaborate blockbuster rendered with high-tech computers, designed to pop with the addition of 3D glasses. Garrone (best known for his 2008 gangster film Gomorrah, winner of the Grand Prix at Cannes) shot on-location throughout Italy and greater Europe, lending the production an earthy, Baroque realism other fantasy films lack. Peter Suschitzky’s cinematography captures fabulously ornate, old-world structures such as the Palazzo Vecchio, Donnafugata Castle, and Roccascalegna Castle. Along with superior costume design by Massimo Cantini Parrini and an overall production design by Dimitri Capuani, Tale of Tales feels like it takes place in a real, tangible world. Its curious place in reality creates a fascinating juxtaposition when the stories told reach farther into the fantasy realm than perhaps we’re accustomed to.

Of course, all is not pure cinema in Tale of Tales. His assortment of multinational actors makes up an incongruous, if undeniably talented, group with several excellent portrayals among them (Jones and Cassell are standouts). Occasional moments of digital influence appear throughout, from creature effects to animated backdrops to craft storybook lighting. However, the nature of the artifice behind Garrone’s approach is far removed from the standardized form of most Hollywood fairy tales, so even if CGI is present, it doesn’t look like Hollywood CGI. Whereas an underwater battle with a sea monster would have resulted in an over-the-top spectacle in any studio production, Garrone’s film takes on the same scene with an eerie calm. Images of Hayek’s queen eating a heart or a woman who has herself flayed are shocking in the way Basile meant them to be. Tale of Tales embraces these folk stories by recreating their often haunting lessons with an artistic integrity rarely seen in fairy tale adaptations today. Though the film is decidedly not for children, it remains almost revisionist in its faithfully disturbing origins.