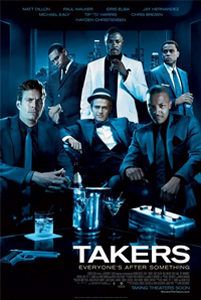 Takers is a cops-and-robbers heist movie about thieves whose motto—“We’re takers, gents. That’s what we do for a living: We take.”—just about sums up the empty-headed level of intelligence moviegoers can expect throughout. Derived from tired clichés, the one-note characters populate a caper whose influences are so obvious that it borders on robbery. The movie, directed by John Luessenhop, is a gangsta-filled version of Michael Mann’s Heat that wants desperately to appear cool and arty, but instead, comes off so artificial that it’s laughable.

B-grade stars fill the screen and do their best to appear as though they have style, in the same way that Sean Combs so desperately wants to be as classy and powerful as Frank Sinatra in those dreadful Ciroc Vodka commercials. R&B star Chris Brown and rapper T.I. receive producing credits, so it becomes apparent that these gentlemen have attempted to make crime classy. Driving stylish vehicles to their chic club, the five members of the movie’s gang of thieves walk together, as though posing for a boy-band photo shoot. They appear dressed in expensive duds, drink expensive drinks, smoke expensive cigars, and live in expensive apartments with a regular inflow of expensive prostitutes. The filmmakers want us to believe that money buys class, though that’s rarely the case.

This wannabe Rat Pack of bank robbers is led by Gordon, played by Idris Elba, the only actor in the cast who can make his simple character deceptively interesting. Paul Walker is Gordon’s second-in-command John; Brown and Michael Ealy play brothers Jesse and Jake; Hayden Christensen is A.J., whose porkpie hat never becomes him. Together they execute a masterful bank robbery early in the movie. This attracts the attention of their former associate recently released from prison, Ghost (Tip ‘T.I’. Harris), who proposes an armored car raid like the one in The Italian Job. Gordon’s crew remains suspicious of Ghost, maybe because he says the word “shit” so much. Or perhaps because he’s angry that Jake took his former “bitch”, Rachel (Zoe Saldana), while he was locked away. Regardless, plans for the armored car robbery proceed, and all the while Ghost plots a double-cross involving a stereotypical gang of Russian mobsters.

Hot on their trail are LAPD detectives Jack and Eddie, played by Matt Dillon and Jay Hernandez. Of course, Jack and Eddie each have troubled personal lives, but what movie cop doesn’t? Jack avoids his Internal Affairs department for some off-screen use of excessive force and proves he has issues when he takes his young daughter along on a car chase. Eddie acts like he’s the only honest cop in California, but he has his demons too, and the predictable script makes sure he pays for them. The script’s sense of morality doesn’t apply to the “Takers” however, as those who get away in the end have probably killed cops and armored car guards through the course of the movie. But they’re classy, so it’s okay.

Then there are Luessenhop’s attempts to elevate the material into something serious. He employs worn-out shaky-cam visuals during action scenes and high color saturations in others to replace any need for real style. Near the end of the movie is a big shootout between the various gangs in a cramped hotel room, recalling the finale of True Romance. Luessenhop’s scene plays in slow-motion with orchestral music behind it, as though we should buy this half-baked attempt at operatic grandeur. The overused slow-mo only helps the audience realize how absurdly somber this moment is, and how hard Luessenhop is trying. But, we couldn’t care less if the characters die; the music swells, and as everyone onscreen hangs their heads, we shrug with indifference.

It took four credited screenwriters to conceive Takers, and not one of them with an original idea. This movie was sewn together from bits and pieces of better movies, and that recycled quality never allows the story to take off. When the entire movie feels like an assemblage of clichés, humorless dialogue, and formula plot points, the experience becomes one of unintentional laughter. For fans of Mann’s Heat, Luessenhop’s attempt to borrow the structure of that film proves insulting. And for those still unconvinced, Paul Walker’s presence alone should indicate the kind of movie you’re getting here.