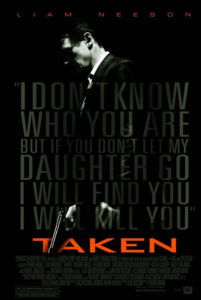 Imagine Jason Bourne fifteen years after his trilogy of adventures, now retired, divorced, and with a teenage daughter. He’s still the loner type, sleeping in chairs instead of beds out of habit, unable to shut down his obsessive training and attention to detail. Ready to spark into action at any moment, he kills out of reflex. With a broken family to protect, his abilities slumber until awoken. And when you mess with his personal life, he fights back, unleashing a harsh vengeance that’s unmatched no matter how many goons you assign to stop him. That’s Liam Neeson’s character in Taken.

Of course, Neeson isn’t playing a middle-aged version of techno-stomping action hero Jason Bourne; Matt Damon wouldn’t dare relinquish his title so willingly. Rather, his name is Bryan Mills, an ex-CIA “preventor” that’s given up his license to kill and life of international travel to be near his daughter Kim (Maggie Grace), though she lives with her mother Lenore (Famke Janssen) in her stepdad’s mansion. On her birthday, Kim gets a horsie and a party and lots more, but she also wants to go to Paris on vacation with her friend. Bryan doesn’t think it’s a good idea, and when your former superspy dad advises against something, you should really listen.

Because he loves his little girl, he agrees to the trip. First thing off the plane Kim and her friend virtually ask to be kidnapped when they share a cab with a strange man, who proceeds to ask them questions about where they’re staying and so forth, which Kim and her friend willingly answer without a hint of suspicion. Kim’s French holiday turns out pretty lousy when she’s later kidnapped by Albanian sex traffickers. Luckily, she made a call to daddy before she was ripped away from the phone.

Bryan knows the score. A few telephone calls to his former associates later and he’s hot on the trail of bad guys doing scummy things. Unlike the aforementioned Bourne, Neeson’s character has some emotional involvement beyond saving his own skin. He’s on a desperate search using harsh skills any parent of a kidnapped child wish they had. While outsmarting local authorities, he tears into the Parisian underworld and leaves few alive to tell the tale. He kills without compunction in a perilous search to find his daughter, and while normally such unrelenting remorselessness might turn off some viewers, we never blame Bryan for his extreme prejudice.

And indeed his retaliations are extreme, as he tortures and kills execution-style those involved in the kidnapping. It might be suggested that Bryan is a symbol of American militarism, storming in and killing everyone in sight when one of his own gets into trouble, except the subtext in this yarn is too thin to analyze with any seriousness. Neeson offers a performance that won’t earn him any praises for nuance or multilayeredness, but he creates a singular force, believable enough in his deep voice that, to be sure, his character can and will do the things he intends to. An unlikely hero outside of Sam Raimi’s Darkman, Neeson may seem better suited to affecting dramas like Schindler’s List and Kingdom of Heaven. Certainly, most 56-year-old actors couldn’t fill his role with such veracity, but the performer’s presence deepens the part from your standard invincible action hero to a character we want to see succeed, and not just because it means wiping out Euro-trash (although that helps).

Luc Besson produced the film and co-wrote the script with his longtime writing partner Robert Mark Kamen. Together they’ve assembled a catalog of sometimes-commendable loud movies with little brains, ranging from The Fifth Element to The Transporter franchise. Occasionally, an actioner with some heart slips in, such as Léon: The Professional. And since Besson has all but retired from directing himself, it’s surprising that former cinematographer Pierre Morel (District 13) should bring a film with such feeling. Granted, you won’t be reaching for tissues by the end, however, the writing and direction absorbs us enough to make us care, which is more than can be said for most action movies nowadays.

Assembled via thrilling car chases, spy setups, shootouts, and brutal hand-to-hand combat, the most remarkable aspect of this actioner is that it features action we can follow. What a novel concept. Too often in recent years, ironically following the success of shaky-cam pictures like The Bourne Supremacy, have action movies been lost on unintelligible chaos placed on screen for audiences to watch… confusedly. It’s easier for filmmakers to jiggle the camera about during scenes of violence than to stage clarity in their action. This stylistic choice has ruined a small section of the genre and makes films like Taken, which wants viewers to see what’s happening, oddly rare and welcomed.