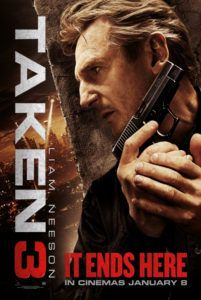 About the only thing Taken 3 gets right is disposing of its kidnapping premise from the entertaining 2009 original, which was annoyingly repeated in the appalling 2012 sequel. Everything else in this purportedly final entry in the trilogy (the poster’s tagline reads “It ends here”) reeks of lazy, formulaic action moviemaking at its worst. What else should we expect from producer Luc Besson, whose factory of top-earning actioners has distributed no end of underwhelming output in recent years? Indeed, Besson and his longtime collaborator Robert Mark Kamen provide a script ripe with formulas that may not be present in the previous two Taken movies, but anyone versed in action movies from Schwarzenegger to Statham will have seen dozens of times before.

Liam Neeson returns as superspy Bryan Mills, whose preoccupation with his daughter Kim continues here. Distractingly played by thirtysomething actress Maggie Grace, Kim is now a late-teens college student and, in early scenes, discovers she’s pregnant. Looking like she should already have squeezed out a couple of kids and have a steady career by now, Grace’s presence is even stranger when her father character shows up with a giant teddy bear for her birthday. She’s none-too-amused, perhaps because she’s hesitant to tell her father about her pregnancy (instead, she tells him she’s considering getting a puppy, to which he gives stern advice about the high level of responsibility required to raise an animal). Meanwhile, Mills’ ex-wife Lenore (Famke Janssen) wants to rekindle her relationship with him, as her marriage to Stuart (Dougray Scott, looking slimy and decidedly villainous) is failing.

You’ve just read a very boring paragraph summarizing some very boring character development from the very boring opening act of the movie. But just when things pick up, the direction by Olivier Megaton, who actually renamed himself after an atomic bomb, becomes unbearable. Mills comes home to find his ex-wife dead, her throat slashed in his apartment. Just as he finds the body, the LAPD bursts in—it’s a setup. Mills evades arrest in an unintelligible choppy chase sequence, then taps his former CIA compatriots (David Warshofsky, Jon Gries, and Leland Orser) to determine who framed him. Could it be the seedy Russian gangster Oleg Malankov (Sam Spruell) from the murderous prologue sequence? Or maybe the sliminess of Lenore’s ex-husband finally turned him to a life of crime? As Mills attempts to figure it all out, he’s pursued by good-guy detective Franck Dotzler (Forest Whitaker), who plays with a chess piece and thoughtfully eats warm bagels in a tick equivalent to Sherlock Holmes’ flair for pipes.

During action sequences, editors Audrey Simonaud and Nicolas Trembasiewicz seem to cut every half-second, the shot-by-shot logic almost abstract in the sense that one image has nothing to do with the next. Following the action becomes a difficult visual exam for the audience, testing our ability to make connections where none exist (doubtful anyone outside of the filmmakers’ exclusive circle will be able to pass said exam). There’s also been a watchful effort to maintain the series’ PG-13 rating by reducing the violence and swearing. The jerky editing cuts around the violence, and poor looping leaves a “fuck” visible on one actor’s mouth but audibly replaced with “screw”. As the persistent chase throughout the movie carries on, Megaton delivers not one memorable action set-piece.

Taken 3‘s wrong-man scenario may offer something different in place of the previous two’s kidnapped-and-recovered structure, but the script wastes too much screentime on pointless characters within the LAPD, red herrings galore, and needless flashbacks to plot points not yet forgotten. To be sure, a considerable amount of the movie’s 109-minute runtime has been exhausted on meaningless filler, whereas the action scenes could have been extended to satisfying effect if only to lessen the padding. Not even enthusiasts of Liam Neeson: Action Hero have much to savor here since the movie spends more time on silly and predictable plot twists than relishing the minor joy of watching this actor kick butt. For a series whose pleasures were few and limited, Taken 3 ends not with a bang but with a whimper.