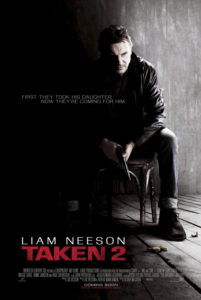 Taken 2‘s audience goes on a very special journey in which 17-year-old Kim, played by 29-year-old actress Maggie Grace, finally gets her driver’s license. She failed the exam twice, but she’s unconcerned at the moment because her cool new boyfriend has a car. Alas, Kim is having some trouble with the parallel parking section of the driver’s test. Do you think she might gain some experience during a family vacation in Istanbul, where her father and mother are suddenly kidnapped by the revenge-bent family of the sex trafficking criminals who kidnapped her in Taken? She just might. At one point, she quickly learns to drive better than Stuntman Mike behind the wheel of a local taxi, and on a stick shift no less, navigating narrow streets and dodging pedestrians better than Popeye Doyle did in The French Connection. Maybe the special set of skills attributed to her ex-CIA father Bryan (Liam Neeson) were somehow passed down between films.

In terms of lackluster Hollywood sequels, Taken 2 is on par with Die Hard 2: Die Harder as one of the worst. Lazily written by producer Luc Besson and his frequent co-writer Robert Mark Kamen, incoherently directed by Olivier Megaton (Colombiana), and laden with no end of silly plot elements, this is among the most unnecessary action movies in recent memory. More important to the filmmakers than showcasing the badass talents of Neeson, whose action hero status was solidified by the 2009 original, is developing the silly character of Kim. Grace’s teenager role, for which she’s far too old and embarrassingly cast, should have been written out completely. Instead, the filmmakers make an all-too-common sequel mistake by thinking that if they flip-flop the structure of the first one, the second one will seem completely different, even though it’s the exact same movie. And so, this time around, it’s Kim who must save her father, until, of course, her father must save her.

When the movie opens, Rade Serbedzija’s Eurotrash villain is overcome by his parental need to avenge the death of his sons, killed by Bryan when he rescued his daughter from the Parisian underworld. Now Bryan has met Kim and his ex-wife Lenore (Famke Janssen) in Istanbul for a getaway, and the two adults are… wait for it… taken by the unmemorable, dim-witted villains. Neeson’s severe phone voice issues another set of curt instructions to his panicky daughter, but this time he’s telling her how to locate her parents in a crowded city by tossing grenades across empty rooftops. (NOTE: Throwing grenades: not a good idea for the response team to the next Amber Alert.) Kim helps her father escape through a fancy bit of driving, but the bad guys get away with Lenore. Bryan determines to do “what he does best” and rescue his ex-wife, with whom he has rekindled a romance. Meanwhile, if the villains can be outsmarted by Bryan’s spoiled Beverly Hills daughter, what chance do they have against a former superspy?

The final bout of fisticuffs occurs between Bryan and an unworthy goon in a jogging suit who’s about one foot shorter than Neeson. Could they have picked a more unintimidating baddie? This, and every other instinct by Besson camp director Megaton, displays a profound sense of dwindling creativity, which usually doesn’t happen until about three or four sequels into a major franchise. Then again, the bridge dropped out from underneath Besson’s similar Transporter series after just one entry, so perhaps the Taken movies are right on track. Megaton employs no end of jerky camera movements and the unintelligible efforts of editors Camille Delamarre and Vincent Tabaillon to ensure we never see the action clearly. Chances are, if the abrupt cutting slowed down, we’d see just how easy it was for Bryan to level these untrained thugs, and we’d be even less interested than we are being unable to follow their beatings in their present, jumbled form.

Pieced together from sure-thing formulas and loosely plotted action movie tropes, Taken 2 gives mindless moviegoers a brief diversion, like dangling car keys to entertain an infant. Nothing much of what happens in the movie retains any level of consequence with the viewer, but on occasion, Neeson does something interesting, and we forget, for a mere moment, how much of a complete waste the rest of the movie manages to be. Then again, if sights and sounds displayed in no particular coherence and a total void of narrative logic sound like your cup of tea, then drink up. Besson and Megaton have delivered a sequel that fails in every way to live up to its predecessor, with the entire cast misused in an uninspired scenario barely fit for Jason Statham, much less a thespian of Neeson’s caliber. As far as Kim and her inane, unintentionally hilarious driver’s exam subplot, one can’t help but recall Jurassic Park: The Lost World, gymnastics, and stupidity.