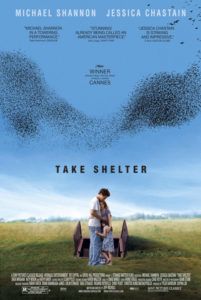 Times are scary. At any moment there might be another disaster of global proportions—be it celestial, economic, environmental, or godly—to end it all. Climates could change and take everything we have away. And people with a family, a stable job, health benefits, and a home to call their own have much to lose. Curtis has a good life. His best friend tells him so. “You’ve got a good life,” Dewart says. “I think that’s the best compliment you can give a man: take a look at his life and say, That’s good.” Anxiety over losing his good life weighs heavy on Curtis’ shoulders. He looks outside and watches menacing storms developing and feels troubled, paranoid even that it all might vanish, that his humble American Dream might turn into a nightmare. His anxiety fills him with a need, perhaps an irrational one, to prepare.

In Jeff Nichols’ powerful film Take Shelter, the desire for security and to protect one’s own becomes a fervent obsession, devolving into extremes of madness. Or perhaps we’re right to fear what’s coming, given today’s many hardships. Nichols leaves it up to the viewer. This is the writer-director’s second collaboration with actor Michael Shannon, who starred in Nichols’ previous film, his first, called Shotgun Stories from 2007. Shannon plays Curtis, a construction worker who lives with his wife, Samantha (Jessica Chastain, terrific), and their hearing-impaired daughter, Hannah (Tova Stewart). They have a modest home in Ohio on a small plot of flat land surrounded by fields. But in his dreams, Curtis envisions massive storms forming, filled with looming clouds and thick, “fresh oil” rain pouring down unlike anything he’s ever seen.

During his nightmares, the odd storms cause erratic things to happen. In one dream, his dog attacks him. In others, his furniture elevates off the ground or crazed people attempt to break in and steal away his daughter. Curtis knows these are dreams, yet they are potent and realized with uncommon veracity, enough to linger in the morning and throughout Curtis’ day. Could the dreams be something more? Premonitions perhaps? Unable to shake the imagery, he builds a pen outside for his indoor dog. At this, Samantha is puzzled and so is Curtis’ friend, Dewart (Shea Whigham), who doesn’t want to see Curtis lose what he has. Nevertheless, Dewart agrees to help when Curtis says he wants to expand on their backyard storm shelter. Without telling his wife, Curtis takes out a loan to finance the project and borrows equipment from work to develop this underground refuge, filling it with canned food, cots, and gas masks. He spends nights in there, building.

Despite his behavior, Curtis knows something may be wrong with him. After all, he’s not bonkers, but rather quite sensible. He responds by checking out library books on mental illness and then presents his free clinic counselor with a self-diagnosis. There are five warning signs of schizophrenia, and Curtis believes he’s experienced two. The possibility of more troubles him when he thinks of his mother (Kathy Baker), who was institutionalized for paranoid schizophrenia when she was 35, his age now. Knowing there’s something potentially wrong with him doesn’t prevent Curtis from going home to work on the shelter, and his two disparate responses worry Samantha. They have bills, their daughter an upcoming operation that will allow her to hear again, and Curtis has suddenly become reckless with their money. People in the community, well aware of Curtis’ family history, are talking. But if his dreams are right, none of this will matter because it will all be over.

Shannon has played a madman-type before, even in another film where the audience isn’t confident whether or not his character is just paranoid or if there’s some truth behind his strange behavior. Consider William Friedkin’s Bug, wherein an isolated motel room Shannon convinces Ashley Judd that they both have insects crawling under their skin; they resolve to get them out by any means. Shannon is known for his intensity, most often seen in supporting roles, like his Oscar-nominated turn in Revolutionary Road. But here’s a performance that defines him as a complex leading man (and in a project more accessible than his leading role in Herzog’s My Son, My Son, What Have Ye Done?). To be sure, Shannon displays his wild-eyed intensity during a community lunch scene that is both alarming and exhilarating to behold. Throughout the rest of the film, however, it’s his uneasy calm that affects us the most—the impression that, behind those silent eyes, the wheels are turning. But to what end?

What Nichols does best is create reasonable doubt with a final image that confirms one way or the other—but also doesn’t—whether Curtis is mad or if his dreams were prophetic. His film builds suspense in Curtis’ escalating behavior, the dreams growing more forceful while evidence of mental illness becomes more compelling. Nichols aligns the viewer with Curtis’ perspective, watching as the film’s swarms of birds fly in panicky shapes only to fall from the sky, or as the chillingly realized storms form like some atomic plume. The last shot recalls the one in Christopher Nolan’s Inception, containing the perfect amount of finality and elusiveness to leave viewers certain in their own interpretation. Nichols fashions an illusion of closure, although his finale remains open-ended for the viewer to project their own meaning. This dynamic—where the viewer can feel certain of their reading in spite of no “intended” understanding—rarely occurs in cinema, and becomes the mark of a great storyteller determined to involve the audience.

Not only does Take Shelter’s story stay with you long after viewing to provoke hearty discussion, but it resonates with a prevailing, important metaphor about America’s current anxiety-ridden age. At first look, the film might appear to be a straight drama about mental illness, except Nichols twists his narrative into something complex and startlingly figurative. The film becomes a haunting tale of horror—not about ghosts or monsters lurking in the dark, but about our own relatable fears and the rationales we devise to act upon them. Do we have good reason to feel anxiety over endless news stories detailing the recent series of devastating earthquakes, rampant storms, and an economy that refuses to heal? Or are we just being paranoid? Nichols preys on those tensions to build a suspenseful, thoughtful film, propelled by Shannon’s astounding performance, and feeds on a sense of dread that at present is universal.