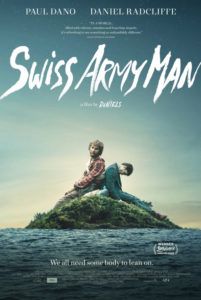 In his 1939 book The Civilizing Process, German sociologist Norbert Elias wrote about social Darwinism and how post-medieval behaviors of the upper classes shaped social decorum. Elias’ study considers period books on etiquette and public manners, detailing how the control of bodily functions denoted well-mannered conduct. Such texts addressed table manners, the appearance of flesh, certain emotional expressions, discussion of sexual matters, and flatulence, among many other topics. Although these behaviors were once considered a part of the natural order of things, they were later deemed rude and not suitable for public exhibition. Stemming from Elias’ book is an understanding of what is considered “civilized” in the Western view. Therefore, the importance of denying these activities has resulted in a certain amount of shame and embarrassment associated with them, even though they remain natural parts of the human bodily experience.

Swiss Army Man operates on the concept that social conditioning can and does have potentially damaging psychological consequences. But don’t let those highbrow ideas fool you. Part music video, part existential comedy, part exploration of society’s trained aversion to natural bodily processes, the film is odd and unique—probably one of the strangest films you’ll see this or any other year. Written and directed by Daniel Scheinert and Daniel Kwan, together known as the “Daniels,” this surreal debut feature contains elements of Robinson Crusoe and Weekend at Bernie’s, resulting in a grotesque and soul-searching original that requires time to grow on you. Talented goofballs, the Daniels created DJ Snake and Lil Jon’s fun and inspired “Turn Down for What” video, and their very Michel Gondry-esque mannerisms drive Swiss Army Man from start to finish.

Before the opening titles even appear onscreen, the film’s protagonist tries to kill himself. Paul Dano appears haggard and thin, sporting a craggily beard. He wraps a makeshift noose around his neck and steps off the small cooler he’s using as a stool. His character, Hank, has been stranded alone on a small island for who-know-how-long. Hank admits he hoped to see his life flash before his eyes before he died; instead, he sees a body wash ashore and thinks he might finally have some company. But it’s a corpse, performed with admirable slumped, slack-jawed devotion by Daniel Radcliffe. Hank names it “Manny” and observes the body’s internal cavity is filled with death gasses, which work their way out into thunderous farts. With that, Hank climbs aboard Manny’s body and rides it like a tooting jet ski to the mainland. But throughout the remaining 90 minutes of Swiss Army Man, we cannot help but wonder if Hank actually killed himself, and the remaining film is merely his fleeting moments of life before the noose does its work.

As Hank gradually works his way back to civilization through a dense forest, the film keeps our hero at a distance. Everything we learn about him, we learn through his ongoing dialogue with Manny, who at first does not reply. Soon enough, though, Manny begins to speak in breathy whispers, becoming a full-fledged chatterbox full of questions about food, life, garbage, Netflix, and masturbation. Manny’s ability to speak grows clearer as Hank learns about the other wondrous abilities afforded by his corpse friend: a mouth that spews fresh water when the stomach is pressed, an arm-swinging karate-chop action, a compass erection that points north, and fingers that snap a spark to light a fire. With no memories of his former life, Manny gains a new ability each time he experiences or feels something. And love being the most powerful emotion of all, he fixates on an image of an elusive young woman (Mary Elizabeth Winstead) displayed on Hank’s dying smartphone.

Those repelled by scatological humor should focus on Swiss Army Man’s more endearing quality—the relationship between Hank and Manny, tenderly played by Dano and Radcliffe. Beyond the obvious physical comedy of the scenario, their curious friendship involves role-playing and some emotional vulnerabilities exposed in clues to Hank’s backstory, all performed with an energy reminiscent of Be Kind Rewind. Shame plays a major role in the narrative, as Hank has denied himself certain bodily joys and freedoms because he has been trained to do so. Being around a cadaver that’s unapologetic about its corporeal reality allows Hank to find a charming degree of self-acceptance. But for every emotional note, the Daniels amplify the already dreamlike quality of the story with another strange flourish. Consider the extended musical sequences where Dano and Radcliffe hum and sing the film’s otherwise non-diegetic soundtrack, which includes excerpts from the song “Cotton Eye Joe” and John Williams’ iconic Jurassic Park score.

Playful and infectiously weird, Swiss Army Man contains surprising revelations in the final act that threaten to become very real; unfortunately, the film sacrifices its potential emotional wallop for its more Rabelaisian sense of humor, as opposed to balancing out those ideas. Indeed, connecting to the material may prove to be a challenge. Meanwhile, the Daniels’ frequent use of slow-motion in their music-video output also accompanies Larkin Seiple’s crisp lensing here, creating memorable and out-there visuals. Overall, it’s an impressive and confident production from these first-time filmmakers, and it’s undeniably inspired too. Viewers may struggle to see beyond the offbeat concept and execution to find the film’s message about bodily acceptance, but no one who watches Swiss Army Man will be able to deny the imagination and idiosyncrasy of what they’ve seen.