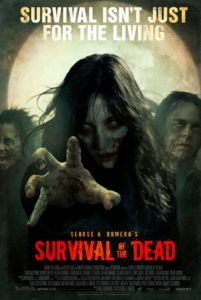 George A. Romero’s Survival of the Dead feels like it was made by a younger, less talented director trying to accomplish something like Romero’s own classics of the now-tired zombie sub-genre. Reliant on gunfire and bloody effects above storytelling or embedded commentary, the sixth film in the writer-director’s ongoing series of zombie films plays like an homage to his esteemed early work. The outcome falls in the category of cheap schlock and will make even the most devoted fans question if Romero still has the energy to remain edgy.

Despite his ongoing series of zombie films, Romero has never made a sequel in the traditional sense, until now. The military man, ‘Sarge Crocket (Alan Van Sprang), who raided the fleeing heroes of Romero’s 2008 film, Diary of the Dead, upgrades to a leading man this time around. We follow Crocket’s group of surly, armed forces survivors as they look for sanctuary from the walking dead. They discover a communiqué on the internet of old-timer, Patrick O’Flynn (Kenneth Welsh), advertising safe haven on Plum Island, a small retreat off the coast of Delaware. But the island’s inhabitants, which are by no means immune to the zombie plague, have their own problems.

Plum Island is the home of two Irish families that have feuded for years. A shy derivation of the Hatfield-McCoy conflict of the late 1800s, the O’Flynns and the Muldoons have never seen eye-to-eye thanks to an ongoing quarrel between Patrick O’Flynn and Seamus Muldoon (Richard Fitzpatrick). And the zombie apocalypse has done little to bring them together. O’Flynn believes the zombies should be wiped out, whereas Muldoon believes the zombies, which in many cases are family and friends, should be kept, even protected until a cure can be found. Furthermore, Muldoon hopes to teach zombies to eat something other than human flesh, specifically animal flesh, to give them a place in human society. Meanwhile, the rugged, cynical hero Crocket (note the name) is caught in the middle, watching as the two families destroy themselves to defend their ideals.

Part of the problem resides in Romero’s undeniable conflict between his intention and setting. It’s clear he sought to make a zombie Western of sorts, complete with characters in cowboy hats, who ride horses, and talk in archaic Irish and Western stereotypes. Every Irish character on Plum Island has a thick accent, as though they’ve newly immigrated from their home soil (Romero might’ve just made a Hatfield-McCoy movie with zombies, but set in the 1800s). What’s more, the New England setting, dusted with autumn leaves, looks nothing like a desired Western landscape, and so Romero’s use of traditional genre tropes feels out of place. His shoestring budget no doubt accounts for his lacking consistency between his landscape and the characters within, as shooting a film in Toronto proves much cheaper than trekking out to Monument Valley.

Romero has always been a low-budget filmmaker, but part of his genius is extending those meager dollars beyond their probable limit. Here, he embraces his low-budget status to the extreme of reveling in bad effects and dark, but extraordinarily campy humor. He seems to be trying for laughs with his hodgepodge of genres, but the humor falls flat. And in addition to practical makeup, Romero uses cheap CGI to render more outlandish zombie stunts. One flesh-eater, for example, takes a gun blast to the face in a scene animated with computers; it’s left only with the top of its head and its squirting neck, and the effect looks like a videogame.

Forgiving problems attributable to Romero’s low-budget is easy, however, as long as there’s some meaning to the film. So what exactly is Romero trying to say? He usually presents zombies as a metaphor to construct an allegory about the downfalls of humankind. But Romero’s message has never been more difficult to read, whereas his films like Dawn of the Dead and Land of the Dead have their commentary plastered on the filmic visage like peak satire. Perhaps O’Flynn and Muldoon represent Democrats and Republicans, the two aged forces that continue to argue because of their traditionalist values, and therefore destroy everyone around them (America) in the process. One cannot be sure, which is a major disappointment coming from this filmmaker, one of cinema’s greatest social satirists. Romero offers less of a commentary than just a neat idea about what zombies could do next, namely that they might be trained to eat animals instead of human beings.

It’s distressing that, in the prime of his commercial popularity, Romero shows signs of waning as a social commentator. With this film, Romero seems to be making a zombie movie merely because fans want him to. Given this, maybe the film’s scenario didn’t come naturally. Here’s hoping Romero takes a much-needed break from zombie filmmaking, heavily considers the purpose of his next picture, and accomplishes something more than your typical zombie fare. There have been a lot of zombie movies made by rookie directors of late, and very few are able to keep them fresh and interesting. For every gore-sploitation flick like Dead Snow or Mutants, there’s a rare sample of greatness like Zombieland. That Romero—the champion of the sub-genre and go-to filmmaker for great zombie films—has turned out not only a disappointment, but something of a mild disaster, marks a sad day for fans. And so, apologists of the highest order for Romero and for the zombie sub-genre will enjoy Survival of the Dead. Others will struggle to find Romero’s signature wit and social reflectivity amid the mindless gore and shoddy effects.