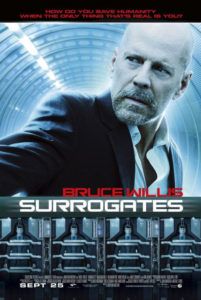 The world is a glorified dollhouse in Surrogates, the based-on-the-graphic-novel sci-fi actioner from director Jonathan Mostow (Terminator 3: Rise of the Machines). Here, civilization has become a collective of paranoid introverts whose bodies remain at home while their consciousnesses, linked to a high-tech robot via neural sensors, go about the world to play in idealized bodies. Why do this? you might ask. Because there’s some dreaded disease or nuclear fallout that makes the outside world unlivable? No, just because everyone has become inexplicably anxious and fearful of routine dangers.

People in the not-too-distant future don’t have any more to worry about than the average person today, but they live through surrogates anyhow. Their robots look human, a Hollywoodized form of human with perfect features and chiseled physiques. Owners can shape their avatar in any way they choose, making them appear perpetually youthful or of the opposite sex. Their inventor, Dr. Lionel Canter (James Cromwell), designed them to help disabled people live “normal” lives, but it’s since become a way for people to escape themselves indefinitely. Now more than 90% of the world’s population sits at home, jacked-in, their unkempt bodies slowly decaying from entropy, while sexy robots march about the world interacting with other robots. The surrogate phenomenon has eliminated crime and filled the streets with automatons galore.

Bruce Willis plays FBI Agent Greer, who’s called in to investigate a murder in which a “surrie” being destroyed causes the death of its operator, which isn’t supposed to happen. Normally, any damage done to the robot doesn’t harm the “meat-puppet” controlling it, except someone’s figured out how to kill the user through their remote connection. So robot Greer interviews robot witnesses with his robot partner Agent Peters (Radha Mitchell, not a robot), the dialogue coldly spoken the way a robot would. The Agents figure out that The Prophet (Ving Rhames), the rebel leader of all human beings who refuse surrogacy, believing it a pollution of the human spirit, has gotten hold of a weapon that can destroy robots and their users in one shot.

Greer’s surrogate makes Willis look twenty years younger, eerily so, with computer special effects washing away the actor’s pesky wrinkles and age spots. Some critics might complain that the cast behaves too mechanically, but that’s the nature of their roles, thus the performances. Willis and Cromwell show enough emotion in their eyes during their non-surrogate scenes, however, that these bursts of emotion are affecting contrasts. Even human Greer interacting with his surrogate wife, played by Rosamund Pike, manages a stirring scene or two. What’s silly is watching two surrogates, speaking in their static way, try to hold our attention.

But none of this matters, because the basic premise rouses too many questions to care. It’s understandable that today’s videogame culture would eat this product up, since it’s a tangible version of The Sims. But what happened that caused normal folks like you and me to suddenly stop living our lives in the flesh? What about population control? With people not dying from your usual number of accidents and diseases, and there being one or more surrogates for every person, shouldn’t cities be overrun by human inhabitants and their robots? And what about cost? Even the most modest models must cost a fortune, and that’s not considering the link-up chair and operator monitoring equipment. How is it that billions of people can afford this? Or, since when did robot technology become so cheap? Is there no lower or middle class in this future? What happened to people that like to exercise? Have outdoorsy types disappeared? How can an entire civilization harbor such paranoia about the dangers of the world to make this a plausible solution?

However much the graphic novel’s creators, Robert Venditti and Brett Weldele, or screenwriters Michael Ferris and John Brancato, wanted to suggest that today’s culture relies too much on their iPhones and computers, the message is lost on a setting that too closely resembles our contemporary culture. It’s futuristic, but not the other-worldly environment needed to make the surrogate idea justifiable. The world of Surrogates just doesn’t make any sense, so we’re never too involved in the unfolding murder mystery. Action sequences where robots jump about like Spider-Man while Willis slogs behind, they’re interesting enough. And plenty of neat technologies and visuals keep us intently watching. Once the action has subsided, however, and we begin to think about this world, it doesn’t add up.