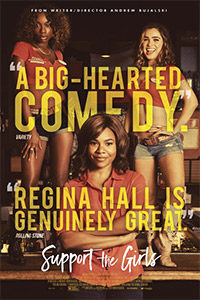 From the opening scene of Support the Girls until the venting finale, writer-director Andrew Bujalski imbues the material with a growing sense of exhaustion over what it’s like to be a working woman in a man’s world. Its message isn’t communicated as feminist outrage or even through the traditional catharsis movies often provide; rather, the film refuses to telegraph its themes in an obvious way. But it’s there, and it’s emergent after the mostly female characters endure a series of insults and indignities. And yet, it’s difficult to know which is more scarcely concealed, the double entendre of the title, the name of the Hooters-style bar called Double Whammies where the film takes place, or the “family” restaurant’s employees in their skimpy outfits. Despite such conspicuousness, Bujalski’s film avoids self-righteous condemnation and considers instead a small ensemble of women trying to earn a living in an industry designed to exploit them. And while it would be easy to accuse Support the Girls of not blasting the almost exclusively male clientele of such establishments with a fistful of angry girl-power, reality isn’t so pure. Many of these young women, dubbed “entertainers” as opposed to servers to avoid a lawsuit, need the wage and tips, and if that means enduring some light sexual harassment, then so be it.

For Lisa (Regina Hall, superb), the general manager of Double Whammies, there’s a fine line that, if crossed, gets any disrespectful or handsy customer ejected from the site. Most of the film takes place over a single shift, following Lisa from one minor disaster to another as she attempts to maintain her grip on a day spiraling out of control. She’s faced with explaining to a group of trainees the delicate balance between customer-friendly and inappropriate flirtation, though some are too eager to embrace the sexual undercurrent pouring out of the establishment. Meanwhile, a thief lodged himself in the air vent the night before, apparently part of an inside job, requiring the police to extract the culprit. But doing so means they cut the cable line, requiring Lisa to interrupt her day with long calls to the cable company to demand that service is restored by the evening, in time for the high-traffic fight night. She’s also contending with her depressed husband (Lawrence Varnado) and their failing marriage, an accident from the night before that sent the boyfriend of an employee to the hospital, and countless other minor fires only she can put out. As Lisa copes, she gathers support from her most loyal work-friends, the ceaselessly cheery and optimistic Maci (Haley Lu Richardson), hilariously armed with a confetti gun, and the more defiant Danyelle (Shayna McHayle, perhaps best known by her rapper handle, Junglepussy).

Bujalski’s script functions as a sympathetic portrait of the lower rungs of the foodservice industry, with Lisa at the center. She’s the lifeblood of Double Whammies, though she’s not blind to the troubling realities of her situation, or that of the competition—a vast corporate empire called ManCave, which has perfected the delicate balance of a neighborhood bar & grill that boasts casual sex appeal for its beer-guzzling, chicken-wing-chomping clientele. More than just exploitative of young women who need places like this, her boss (James Le Gros), the sleazy owner, insists that no two women of color should work in a single shift. He calls the strategy “diversity,” but in fact, he wants to ensure there’s a majority of white flesh on display in the Texas restaurant. Again, Support the Girls doesn’t take a moral stance on this, at least not outright, and neither does Lisa. But the murmur of quiet dissatisfaction is carried in Hall’s nuanced performance, as she takes a deep breath, wipes away the tears when no one is looking, and toughs through her day. It’s a subtle, quite excellent performance from the star of last year’s hilarious Girls Trip.

One of the regulars at Double Whammies, Bobo (Lea DeLaria), shows up every day for the same reasons as many of the menfolk: she’s there’s for the eye-candy; however, the difference is that she sees her fellow women as people, as opposed to objects unworthy of respect. By contrast, watch the scenes with male customers who act with a sense of entitlement in regards to their bad behavior. Paying customers they may be, but according to Lisa, they can’t call her staff “fat” or talk about “pussies” in the restaurant. Even so, servers like Maci accept this as part of the job, and she does so with an enduring, carefree smile that might be a coping mechanism; then again, based on her dating choices, she might just enjoy the attention. Regardless, moments with these sad displays of ingrained and institutionalized masculinity demand our empathy and understanding about why, in many cases, the young women of Double Whammies need to either suppress their disgust or have been culturally conditioned to believe such is the role of women in a male-dominated society. Admittedly, the film’s title doesn’t help much. The debate about the implications of calling women “girls”—and whether that’s patronizing or evident of men attempting to control women by removing their agency through a childlike name—continues.

Bujalski started working in the so-called mumblecore style with Funny Ha Ha (2002) and Mutual Appreciation (2005) before his work gradually became more accessible. Support the Girls carries over some of these qualities; it’s loaded with understated humor, for instance. But this is easily his most mainstream film. It’s relatable characters and everyday situations, combined with just the right amount of laughs and low-key drama, doesn’t map out the journey or wrap up its characters in a tidy bow. This is a good thing. It demonstrates a director willing to leave the subtext buried just beneath the surface so his audience can exhume it, instead of dangling it before us, as most Hollywood productions do. It’s also a joy to be in the company of Lisa, Maci, and Danyelle, whose quiet perseverance gradually wanes over the course of the film and, nevertheless, leads to a satisfying conclusion that, while not resolving the conflict of every young woman stricken to such an exploitative vocation, at least acknowledges their hardships with a considerable degree of empathy. Support the Girls is a considerate and understated indie comedy, capable of drawing out empathy for women, whose situations are less than ideal, by giving them an intimately human face.