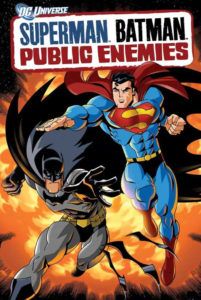 Almost everything about Superman/Batman: Public Enemies marks a low point for the longstanding partnership between Warner Bros. Animation and DC Comics. The lazy plot construction fails to reach the cinematic standard achieved previously in nearly every direct-to-DVD effort. The shoddy animation inexplicably diverts from the angular stylization of their prior films. Worst of all, despite being rated PG-13, this cartoon feels like a cartoon in the worst possible way, nothing like the adult-themed stories that preceded it. In other words, this is kids’ stuff.

The story begins with a relevant economic downfall, where things get so desperate that the United States allows reformed super-villain Lex Luthor (Clancy Brown) to become president. Under his rule, superheroes work for the government. The market balances thanks to Luthor, except Superman (Tim Daly) and Batman (Kevin Conroy) remain suspicious. They suspect Luthor hasn’t changed a bit. Meanwhile, a kryptonite meteor approaches Earth and threatens to destroy everything. Luthor insists he can destroy it with missiles. When Superman publically disagrees, Luthor places a bounty on his head for a billion dollars. Heroes and villains alike come out of the woodwork to take down the Last Son of Krypton, who’s helped by the Caped Crusader in a string of fight sequences with Gorilla Grodd, Captain Atom, Bane, Solomon Grundy, Black Lightning, Metallo, Hawkman, Captain Marvel, Major Force… The list could go on, but it shouldn’t.

Even with all that action, at 67-minutes this “feature-length” release hardly fits the definition of a feature, and even begins to test one’s patience in its singular mission of providing nothing more than endless superhero battles. When your medium has boundless possibility—since animation can tell any story, big or small, for roughly the same budget—why limit yourself to episode after episode of super-powered roughhousing? Why include the cliché device of a meteor racing toward Earth? The plot progresses with no more smarts than a 5-year-old displays when playing with his comic book hero action figures.

And then there’s the animation, which doesn’t fit into the visual scheme originated on Batman: The Animated Series, and then continued in Superman and Justice League. Those programs won Emmy awards for their ingenious animation techniques, so groundbreaking for the medium. Here, bulky and style-less figures, muscle-bound beyond human possibility, move about your television set as freakish oddities. Look at the absurdly busty Power Girl, a character whose head is smaller than even one of her breasts. It’s no secret that fanboys like to see superwomen sporting a hefty bust—a baffling phenomenon in itself—but this was ridiculous. So because the animators have done such a sloppy job depicting human beings, we’re reduced to watching mere costumes engage in fisticuffs.

Though the original voice actors from the above-mentioned shows returned, what we see just doesn’t link up. What could account for this considerable lack of uniformity in production and story from the studio’s previous animated features? Here’s my theory: Warner Bros. got greedy. After successes like Superman: Doomsday and Justice League: The New Frontier, both of which sold more units than expected, the company realized superhero fans were eating up their DVDs and generating a hefty profit. So why not produce more films? More films released means more profits, right? Trouble is, when you’re in a rush to release more films from ostensibly the same creative team, the time spent on each lessens and the overall quality wavers. Consider the preview for spring 2010’s release, Justice League: Crisis on Two Earths, which indicates that Brown, Conroy, and Daly will not return to voice their respective characters. Was this an artistic choice, or was the studio in such a rush that they couldn’t (or wouldn’t) wait to work out any scheduling conflicts to appease fans and remain consistent to their cartoon canon? Probably the second option.

However cynical my conclusion may be, the movie and the decisions the studio is making speak for themselves. It’s not that the end result is bad—certainly, there’s more value here than what children find on television nowadays. But when compared to Green Lantern: First Flight or Wonder Woman, the other two features that hit stores in 2009 from Warner Bros. Animation, this looks like a desperate offshoot. A severe disappointment, Superman/Batman: Public Enemies brings a level of skepticism toward the studio’s future work. Will they continue to shoot for volume and therein sacrifice artistic merit, or is this just a bump in the road to greatness? Let’s hope for the latter.