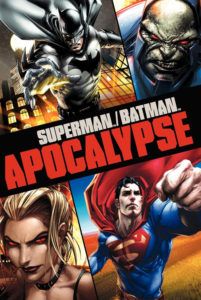 Warner Bros. Animation, determined to drive their profitable line of PG-13 rated, made-for-home-video animated features into the ground, has released yet another DC Comics-related movie under the Warner Premiere label. They’re passed the point of overkill with their latest release, an origin story for Supergirl called Superman/Batman: Apocalypse. Though animated with the visual style of the origin comic arc, “The Supergirl from Krypton” by writer Joseph Loeb and artist Michael Turner, for fans of Warner’s Batman and Superman animated series from the 1990s, the result just won’t look right. At least the producers have gathered the voice talents of eponymous heroes from the television shows, Kevin Conroy and Tim Daly, to reprise their respective roles. But the film’s limited lasting effect, its one-and-done quality, does the entire franchise a disservice by not building to something greater than an individual story.

Through the various titles released via the Warner-DC collaboration—everything from the stellar Justice League: The New Frontier to the not-so impressive Superman/Batman: Public Enemies—growth has not been a priority, either in the realm of the storytelling techniques nor in the sense of an emergent story arc with each new film. And while individual films (namely Green Lantern: First Flight and Wonder Woman) prove entertaining as solo works, in the tradition of the comic books and televised cartoon on which they are based, these films demand continuation (i.e. sequels). Granted, not every comic book-centric studio can have the crossover clarity of purpose as the Marvel Entertainment build-up to the eventual The Avengers movie. But if Warner-DC would give us a reason to keep buying these direct-to-video films, such as making each new film an entry in an ongoing series, they would likely become more engaging.

As is, the average 75-minute runtime doesn’t provide enough time to establish new versions of the same characters within the one-shot film. The story begins with a Kryptonian craft crash landing in Gotham City, leaving Batman (voice of Conroy) to track down the sole passenger—who turns out to be the teenaged girl Kara Zor-El (voice of Summer Glau), Superman’s long lost cousin. Experiencing her super-powers for the first time under the guidance of Superman (voice of Daly), Kara learns the ways of Earth girls in a ridiculous shopping montage. Once she understands shopping and junk food, Superman quips, she’s pretty much got down how to behave like an Earth girl. Luckily, Wonder Woman (voice of Susan Eisenberg) and her band of Amazonian feminist warriors demand that Kara be trained to use her vast powers on their island, offering an alternative view on feminine roles for Earth girls. Meanwhile, Batman worries that Kara may have ulterior motives, or that she may become too powerful and pose an unforeseen threat.

Across the galaxy on the evil planet Apokolips, the insidious villain Darkseid (voice of Andre Braugher) has his own plans for Kara. In hopes that her power might lead his vicious group of Female Furies, Darkseid sends the gender-bending Granny Goodness (voice of Ed Asner) to gather Kara for brainwashing. Of course, Batman and Superman and the whole Amazonian army are there to stop them. But the heroes fail to protect Kara from Darkseid’s plot, forcing them to travel to Apokolips and face Darkseid himself and recover the future Supergirl. To do so, they need the help of Darkseid’s former leader of the Furies, the since defected Big Barda (voice of Julianne Grossman).

This humdrum if watchable plot seems to play in some foreign language if you’re not already well-versed in DC Universe characters. Writer Tab Murphy takes little time to explain the involved origins of these characters, if only because the target audience is expected to know the subject through and through prior to viewing. Director Lauren Montgomery, whose experience in television animation began as a storyboard artist for the 2002’s reboot of He-Man, handles the action well and assures that the look of the film recalls Turner’s art. But there’s hardly any dimensionality to these characters; the title characters in particular. When your Batman and Superman are mere garnish to a cliché teen character in Supergirl, it’s time to change the title. Yet because something called Superman/Batman: Apocalypse sells better than “The Supergirl from Krypton”, Warner Premiere made their choice. And that choice, as evident by their output of late, is more concerned with a quick buck than a fine product. Given their onetime potential to challenge Pixar and Disney with the quality of their earliest releases, it’s sad to think how banal these Warner-DC films have become in consideration of how far they could have gone.