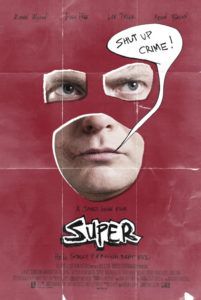 Probably the best of the homemade superhero movies released in the last year or so, writer-director James Gunn’s Super takes a low-budget, high-splatter approach to the concept. The protagonist of Gunn’s grisly comedy constructs himself a costume and attempts to battle criminality and, not unlike Seattle’s local self-styled crime fighter Phoenix Jones, finds there’s a painful reality to playing superhero. Except, the movie’s twisted version of reality contains over-the-top violence to accentuate its subversive intentions, resulting in a visceral, progressively explicit exploration of material that sounds all-too-familiar for today’s movie market. And yet, Gunn’s manic presentation earns the otherwise tired scenario a much-needed edge to set his movie apart from its contemporaries.

Schlubby, repressed fry cook Frank (The Office’s Rainn Wilson) has had a rough life, but he prides himself on two things: a single Good Samaritan moment from long ago, and marrying his pretty, ex-junkie wife (Liv Tyler). Other than those two moments, his life has been a punishing one. It only gets worse when Frank’s wife soon leaves him after being seduced and re-hooked by cocky drug dealer Jock (Kevin Bacon), whose name, I suspect, was simply misspelled by Frank for “Jacques”. At this point, usually Frank’s weirdo type either becomes a serial killer or puts on a costume to dispense with crime. After rapping with God (Frank has prayer sessions that spill over into full-on delusion territory), and some inspiration from a Christian cable network superhero show called “The Holy Avenger” (featuring Nathan Fillion as the yellow-spandex-clad hero), he resolves to become a crimefighter.

As “The Crimson Bolt”, he dons red homemade superhero attire, including elbow and knee pads, and stops wrongdoers by bludgeoning them with a heavy wrench as he shouts his catchphrase, “Shut up, crime!” Aiding Frank in his limited superhero knowledge is Libby (Ellen Page), the plucky comic book shop clerk who becomes his sidekick “Boltie”. Libby’s involvement is more out of blind admiration for Frank, which develops into infatuation and an unhealthy, certifiably bonkers desire to slaughter evil with razor-sharp claws and homemade bombs. The movie’s best moments involve a wild-eyed Libby’s fanatical geek-outs, as Page delivers a maniacal laugh both hilarious and morbid. Together they drive around town in Frank’s jalopy, bashing in skulls of drug dealers and pedophiles—but they also discipline moderate offenders, like those who butt in line at the cinema (bastards though they may be), bringing all their “victims” to the brink of death. Eventually, they wage war on Jock and his gang of hoods (which includes Michael Rooker and Sean Gunn), but only after convincing the public that they aren’t the menaces they’re first believed to be.

Unlike last year’s homemade hero yarn Kick-Ass, action sequences here are more about exaggerating reality with bloody satire than comic book movie escapism. Nevertheless, comparisons are inevitable. That film’s eponymous hero and eventual young accomplice Hit-Girl had amazing fighting skills, whereas Gunn prefers to taint the superhero dream with a dose of frumpy truth courtesy of Wilson and Page. The Crimson Bolt is about as physical as you’d expect coming from Wilson (i.e. not at all), while both he and Boltie learn that a colorful costume doesn’t deter a hoodlum’s bullet. Wrench attacks result in cracked skulls and sprays of blood, and contacts are punctuated with BAM! and POW! crayon graphics. Gunn draws on his Troma Entertainment days and experience filming the underseen horror-comedy Slither to make bloody scenes of superhero justice look nasty and real. It’s all very jarring, but funny if you can get passed the red stuff.

In terms of tone, it would be safe to deem Super uneven, bouncing back-and-forth between gore-heavy comic violence and Frank’s tender sob story. The tidy finale feels artificial compared to what immediately precedes it, some of the tenderness works, most of the absurdist content soars, and the rest is so mad that you can’t help but admire its bizarre pitch. And then there’s the blithe Libby, whose arc comes to a shocking end that wipes the smile right off your face. But Gunn doesn’t seem like a filmmaker who’s interested in evenness or consistency or playing to expectations. He’s elevated himself from his Troma roots by achieving a B-movie worth watching—a movie with style and humor and purpose, even if it stumbles here and there along the way. With so much energy, Super becomes contagious and ceaselessly watchable, and it’s bound to be enjoyed by comic fanboys and horror buffs alike.