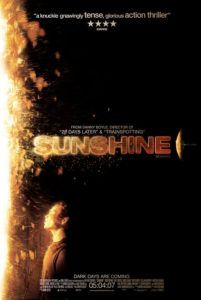 Birthed from Kubrick’s benevolent mother 2001: A Space Odyssey, Danny Boyle’s latest film Sunshine may borrow from classic science fiction, but its atmosphere is all its own. Somewhere between Venus and Mercury, on its way to the Sun, the crew of Icarus II is humanity’s last hope. Our Sun is dying. In order to reignite nuclear fusion within the star, the crew is delivering a payload “the size of Manhattan” (i.e. a massive nuclear bomb made from what’s left from Earth’s squeezed-out natural resources). The explosion should force the Sun back into regular fusion, saving Earth from freezing and dying out. Icarus II looks something like a dandelion tipped on its side, with its blossom a reflective surface that deflects the powerful rays from the star. The crew’s quarters are located in the stem, protected by shadow. There’s an oxygen garden, supplying their vessel with an ever-fresh source of air, as well as food. A recreation room is a less-interactive version of the holodeck from Star Trek: The Next Generation. The crew is few, only eight in all, each with their own specialty, leaving little room for casualties or error.

The cast is comprised of wonderful international performers, their origins ranging from Ireland, New Zealand, Malaysia, Japan, Australia, and America. Cillian Murphy leads them as the crew’s physicist in charge of delivering the payload to the Sun. All of them have seemingly objective, logical, “scientific” approaches to their mission. Yet, we learn very quickly that human emotion figures into every decision. Particularly when they discover what happened to Icarus I, which went missing seven years earlier. Should they risk altering their trajectory and meet with the orbiting Icarus I? One argument resides in the fact that all humanity is relying on Icarus II’s mission, and since their payload is the last possible bomb of its size to be derived from Earth’s resources, there could not be an Icarus III should they fail. In other words, why waste the time searching for survivors on Icarus I? On the other hand, if they can retrieve Icarus I’s payload, their mission will have double the probability of success.

Perhaps the most mysterious, intriguing, and foreshadowingest character is Searle, the mission’s psychologist, played by Cliff Curtis (Bringing Out the Dead, Whale Rider). His mesmerization with the Sun makes the star itself into a character, as if, at that close proximity, unexplainable ethereal forces consume the human mind. Searle stands in a screen room that filters out the Sun’s rays on a massive tinted window. Talking with the ship’s computer, he’s told that a meager 4 percent of the Sun’s intensity at this range would kill him; 3.1 percent, however, is merely blinding. We repeatedly see Searle standing in that window, an evident problem when his skin begins to peel in ragged sores. But he cannot look away.

The science within the movie is surprisingly factual and reasonable, so that we never question its validity within the story. Given that Sunshine is set about fifty years into the future, the Sun’s expiration is a few billion years early, but writer Alex Garland and the film’s scientific adviser Dr. Brian Cox of CERN (formerly named for Conseil Européen pour la Recherche Nucléaire, but now called The European Organization for Nuclear Research) think otherwise. Garland and Boyle worked on 28 Days Later together, yet another movie where humanity and nature (a virus) collide. With Sunshine, we can bisect the film into two interpretations: an atheist or religious argument. Depending on your beliefs, the film meanders down either path, suggesting that the universe is beyond scientific understanding, or simply that what science we are aware of isn’t yet sufficient. Their work on 28 Days Later suggests that Garland’s is the atheist argument, claiming humanity is it’s own worst enemy as we tamper with nature (Sunshine bears an intended space-wide parallel to the modern-day global warming crisis). Boyle, director of the religion-influenced film Millions, would thusly represent the religious argument, stating that when we leave Earth and venture into “God’s Universe”, we become dangerously closer to God.

Without revealing too much about the plot, Sunshine embraces a claustrophobic science fiction setting. Though exterior shots of Icarus II include vast images of the Sun or Mercury, we spend most of our time within the vessel and barely a moment on Earth. Boyle’s restriction of his characters rubs off on the audience. We increasingly feel cut off from the rest of humanity, as if the entire human population exists on Icarus II. It’s a frightening feeling, especially when the ship’s computer informs everyone that there are more crew members than there should be on the vessel. Boyle takes inspiration from 2001: A Space Odyssey, Solaris, and in a way Alien, allowing for a tightly-conceived sci-fi picture, albeit an offshoot. We should know, as with those pictures, that Sunshine will not end happily. How could it? The vessel’s name is not something optimistic like “Hercules”, as if, with their mission, the crew had the world on their shoulders. It is “Icarus”. And if you’re unfamiliar with the reference, you should bone-up on your Greek Mythology.