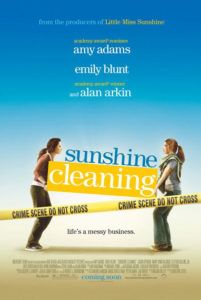 Sunshine Cleaning should be a surefire pseudo-indie hit. At least, that’s what the producers assumed when they wrangled the A-list cast together for this intentionally offbeat dramedy, which tries entirely too hard to be profound. Relying on a dynamic of contrasting brightness and the grimiest of circumstances, the story never quite comes together. There’s no substance beyond the obvious metaphor at the center. What the film lacks in congealed storytelling, however, it makes up for in casting.

Amy Adams foregoes her frequent childlike innocence from Junebug and Enchanted and Miss Pettigrew Lives for a Day to play Rose, a single-mother who cleans houses for a living but dreams of being a real estate agent. Her adolescent son Oscar (Jason Spevack) is removed from public school for having “special needs,” but really he’s just eccentric—occasionally he licks things, like his teacher. Rose is having an affair with her high school sweetheart-turned-cop, Mac (Steve Zahn), who picked his other high school sweetheart to marry over her. He thinks she should start her own business, and suggests the “lucrative” field of biohazard cleanup.

You’ve probably heard of such work on your favorite crime scene investigation program, where technicians come along after the police are through to clean up bits of blood and other bodily fluids when messy accidents and murders occur. Along with her irresponsible sister, Norah (Emily Blunt), Rose buys some cleaning products and thinks a little disinfectant will do the trick. She’s later shown the ropes by one-armed cleaning products store owner Winston (Clifton Collins Jr.), who informs her she needs several certifications before she can begin this work. But Rose needs money for private school for Oscar, so she applies for the necessary documents but continues to accept jobs anyway. While she’s cleaning up after deaths abound, Oscar is left with Grandpa Jo (Alan Arkin), who embraces the boy’s imagination and teaches him the potential of get-rich-schemes.

Everyone in the movie carries melancholy. Oscar asks heavy questions about life and death, ones too deep for a 7-year-old. The sisters struggle to function through the blood and rotten smells, forcing them to remember the suicide of their mother. Rose tries to stop caring about what other people think of her. She slowly finds herself happy in cleaning up after other people’s misfortunes, in helping to bring order to someone else’s life, though she can’t seem to bring order to her own. And Norah works out her latent mommy issues after finding a driver’s license in a dead woman’s fanny pack; she seeks out the woman’s daughter for reasons even she doesn’t understand.

Each character has their own involved backstory; if and how the stories work out is another matter entirely. There’s possibly a romantic spark between Rose and Winston that’s never addressed. The intentions behind Norah’s arc are unclear at best. Where is Oscar’s father? We never know; that might be important, at least for Oscar. Deciding what this movie is about and waiting for it to come together plagues the audience until the end credits roll, at which point we feel betrayed by the ineffectual sense of closure. Watching the film and affable stars onscreen proves lightly entertaining, but too many questions arise when it’s over. The posters punctuate the meaning: “Life’s a messy business.” That thin explanation isn’t nearly enough.