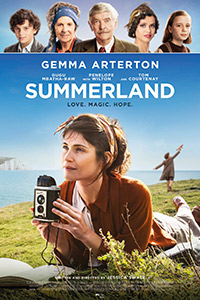 Summerland, Jessica Swale’s directorial debut, takes place during World War II. However, its idyllic setting in Kent overlooks the seaside from a grassy hill, far removed from the reality of war. How appropriate, since the title refers to a type of heaven according to pagan mythology, albeit derived from natural phenomena—a trick of light that betrays the eyes and suggests a floating paradise in the clouds. The film has a similar quality. It’s the stuff of saccharine, feel-good fantasies, yet a more realistic approach to the same story would have dwelled on the grim circumstances for both the characters and the world at large. Still, Swale’s confident first effort behind the camera sees the value of escaping into an isolated land of make-believe where everything comes together in the end. It’s the cinematic equivalent of Fata Morgana, a naturally occurring reflection that inspires cultures to dream up chimerical explanations. Cinema can behave like an idealized mirage too, and Swale, who made her mark on the UK theater scene with original plays and award-winning adaptations, acknowledges that theme in her narrative.

The film opens in 1975, and an aged Alice Lamb, played by Penelope Wilton, punches away at her typewriter, putting the finishing touches on her memoir. When some children knock on her door, she tells them to “bugger off.” She has never liked children much, evidenced by a parallel scene that takes us back to the early 1940s, when the thirtysomething Alice (now played by Gemma Arterton), tells another group of kids to “bugger off.” An independent woman who lives alone and writes academic books about the scientific explanations behind folklore and myths, Alice is an outsider among her fellow Kent townsfolk, and the children give her nicknames like “the beast on the beach” or “the witch.” Any unmarried woman who smokes, shows no need for companionship, and has no sympathy towards children doesn’t fit into quaint village life or prescribed gender roles. And so, predictably, Swale’s screenplay finds Alice forced to care for an adolescent boy named Frank (Lucas Bond), an evacuee whose father is a RAF pilot and mother remains in London.

Of course, Frank’s presence upsets Alice’s routines and annoys her, but it doesn’t take long for these two to become unlikely friends. Though he misses his parents, he blithely embraces the rustic edges of Alice’s home and, since he’s a boy interested in toy airplanes and creepy crawlies, he shows genuine interest in her research too. He even tries to convince his weary tomboy classmate Edie (Dixie Egerickx) that Alice isn’t a witch. Meanwhile, the reasons for Alice’s reclusive lifestyle become increasingly more apparent thanks to her nostalgic memories, flashbacks to 1926 when she attended university and fell in love with the angelic flapper Vera (Gugu Mbatha-Raw, generally underused). Their forbidden romance—cut together by Tania Reddin to remain delicate and unobtrusive, if unnecessarily reserved—comes to a sudden end when Vera decides she wants children and a “normal” life. Alice quickly finds herself alone and becomes a spinster whose anger toward children and cowards stems from her broken heart. Swale’s script relies on an unexpected if somewhat implausible twist to bring the three timelines into focus in the end.

However schmaltzy this scenario may sound, Arterton imbues Alice with naturalism and vulnerability that overcomes the unreserved warm-heartedness of the setup (and it’s not the first time she starred in a World War II film about life on the home front; see also the superb Their Finest, from 2017). Arterton and Mbatha-Raw worked with Swale on her stage production of Nell Gwynn, and their performances, along with a charming appearance by Tom Courtenay, drive the beautiful-looking Summerland. The film has the appearance of a fond memory accented by flowers, green grass, and sea air that captures the light and makes it look tangible. Cinematographer Laurie Rose, who often works alongside director Ben Wheatley (High-Rise, Free Fire), immerses the viewer in a setting that subtly embraces its cinematic artificiality with heightened scenes of Alice looking into a dramatic sunset or fondly remembering her mixed-race lover in a Malickian field. Less enchanted is Volker Bertelmann’s score, which dictates every emotion with plucky strings and moody oboes. It’s a film of picturesque picnics, paradisal remembrances, and only the faintest sense of real danger.

In another time and another mood, one could not be blamed for turning on Summerland. It imagines that England in the 1940s was a shining bastion of good weather and mostly good cheer. The war seems a million miles away, aside from the occasional bad news from abroad. And despite Alice and Vera’s past, the country’s problems of systemic racism and white privilege are never addressed, nor are the harsh realities of what happened to homosexuals in the UK at this time. But these are matters for a confronting social drama, and Swale’s screenplay, having established the concept of a fantastical world in the sky, announces itself as an escape. At one point, Alice argues that the concept of heaven was invented by Christians “to make themselves feel better.” Films often do the same thing. Summerland ignores most of the problems that probably would have emerged in Alice’s life and instead opts for a film with copious amounts of warm-hearted escapism. It may be an illusion, but sometimes, that’s just what an audience needs.