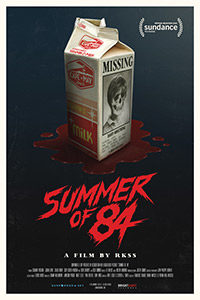 Following in the footsteps of recent nostalgia-fests, Summer of 84 occupies a familiar setup in which four young teens investigate something macabre or fantastical in their corner of Suburbia, USA. Another in a chain of recent ‘80s-inflected TV shows and movies to adopt this setup, the film bears a resemblance to last year’s It and Netflix’s ongoing Stranger Things—without which Summer of 84 would not exist. Of course, those titles borrow from a tradition of Stephen King and Steven Spielberg fare that actually debuted in the 1980s, including E.T. the Extra-Terrestrial (1982), The Goonies (1985), Stand by Me (1986), and the most underrated of them all, The Monster Squad (1987). But where Summer of 84 falters is its deficiency of likable characters, a seemingly essential component to this now commonplace story structure.

Written by Matt Leslie and Stephen J. Smith, the writers don’t bother trying to hide their influences. Look at how the foursome of teenage boys that drive the story resemble the same basic types that we’ve seen countless times before: There’s the shy, relatable conspiracy nut Davey (Graham Verchere); the group’s macho renegade, Eats (Judah Lewis); the bookish one with glasses, Faraday (Cory Gruter-Andrew); and the resident fat kid, Woody (Caleb Emery). Together, they suspect Davey’s neighbor, Wayne Mackey (Rich Sommer), the nice-guy cop who lives across the street, of killing a string of teenage boys in their sleepy Oregon town. Mackey, a bachelor, spends much of his time gardening in the backyard and taking late-night jogs, which leads the boys to suspect he’s up to something nefarious. It’s like Fright Night (1985) but without the fangs.

Summer of 84 was directed by French-Canadian filmmakers Anouk Whissell, Francois Simard, and Yoann-Karl Whissell, the same trio that delivered Turbo Kid, the 2015 post-apocalyptic comedy meant to resemble something cheaper and sleazier than the average New World Pictures release. There’s decidedly less bloodshed here, and most of it is reserved for the final 30 minutes or so. However disgusting and shocking the eventual scares may be, the buildup spends too much time with this group of friends and their endless talk of “pussy” to make the audience care. Frankly, these are unpleasant kids, unlike the corresponding groups from Stand by Me or Stranger Things. We can’t really understand why any of them are friends, except the one thing they have in common, talking about the female anatomy. The proceedings become quite tiresome in their company, especially when it comes to Nikki (Tiera Skovbye), Davey’s former babysitter who serves no purpose except to facilitate his adolescent fantasies and improbably support his quest to expose Mackey.

The directors draw inspiration—in some cases, entire shots—from the movies and TV shows mentioned above, as well as other favorites from the decade of excess. Take a scene when Davey’s friends dig up Mackey’s garden and accidentally cover their walkie-talkie in dirt, a moment taken directly from Joe Dante’s The Burbs (1986), another title about suspected murders in small-town America. Summer of 84 is rife with callbacks such as this, to the extent that viewers well-versed in 1980s cult cinema will either enjoy the references or find the entire experience derivative. Above all, though, the directors attempt to exploit the popularity of Stranger Things, from the character descriptions to the music. Note how the electronic score by Le Matos sounds suspiciously like Michael Stein and Kyle Dixon’s synth-laden sounds from the Stranger Things opening theme.

Ultimately, Summer of 84 doesn’t earn its overstuffed 106-minute runtime. It spends more than an hour in the company of horny little assholes, and only the third act exploring the demented depths implied by the story’s setup (the killer’s lair and final words are genuinely unsettling). Usually, what works best about these adventures is the comradery between the boys, while the source of the mystery is just the icing on the cake. But unfortunately, spending any amount of time with Davey and his friends proves grating, and there’s not enough time spent feeling terrified. Summer of 84 seems to understand the structure of those beloved teen adventures of the 1980s, but it doesn’t understand that lovable characters are what bonded us to them in the first place.