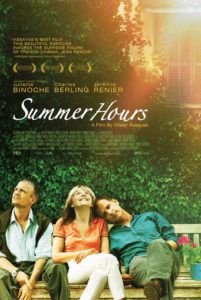 The first scenes of Summer Hours (L’heure d’été) capture a handsome French country house in early evening light, so bright yet with an ethereal haze. Children play games in the yard with puppies chasing after their heels, while the parents drink champagne and talk about adult things. The setting is authentic and casual. Fine art decorates the interiors of the home, the personal collection and remembrances of a family. These paintings and fixtures hold a thousand memories, each recalling those otherwise inconsequential but beautiful moments from the family’s past. Writer-director Olivier Assayas welcomes us into the villa of Hélène (Edith Scob), the artwork obsessed mother of three who has just turned 75. She lives alone in her gorgeous home, its walls aged and earthy, once owned by her uncle and lover Paul Berthier. Only her live-in maid Eloise (Isabelle Sadoyan) assists her. Hélène’s children have all moved on with their own families. The rebellious Frédéric (Charles Berling), a self-loathing radical economist, lives in France with his wife and teenage children but rarely sees his mother. Adrienne (Juliette Binoche, sporting blonde hair) designs China for Japan from New York. And Jérémie (Jérémie Renier) moved his family to China, where his clothing textile has taken off.

Hélène silently laments that her children will undoubtedly sell Berthier’s work after she passes, splitting up “the collection” between various museums and auctions, but she insists that that’s what she wants anyway. Hélène treasures her two Corot paintings, the most expensive items she owns, but the other pieces have so much more personal meaning: the vase by Daum where Eloise always keeps fresh flowers, oblivious that “it’s a Daum”; the tea set by Georg Jensen that Adrienne used as a child and still admires; Redan panels that decorate the villa walls; an entire collection of Art Nouveau furniture that adorns the children’s lives. These items chronicle her life, and she feels the children shouldn’t be burdened by her memories after she’s gone. What she doesn’t realize is that the children’s memories are just as structured around her collection as her own. When Hélène dies, her children are left to decide what to do with her collected works, some of them personal sketch notebooks left by Berthier. Adrienne has plans to get married in New York City, and she claims France means little to her. Jérémie will be in China designing cheap clothes with even cheaper production lines, building his own family. Only Frédéric resolves to stay and manage the estate, but he likely won’t have the time to deal with the house, so it too will be sold. Eloise will retire. Everyone will move on.

During the sale process, discussions of nationalistic pride in French artwork ensue, resolving that pieces should remain in their country of origin. The Musée d’Orsay accepts much of Hélène’s collection, allowing the children to avoid massive inheritance taxes, and sadly all those memories are just given away. More saddening is that the children don’t realize how much they miss the artwork until it’s no longer in their lives. These pieces have so little impact on museumgoers and so much personal memory for the family. One patron on a guided tour through the museum can’t detach himself from his cell phone, and he waves off Hélène’s old desk as just more furniture. Does Hélène’s art now belong where it can be scrutinized but more often ignored by art aficionados, only to be passed over for something more eye-catching or modern? Perhaps art should be preserved like memories instead of relics in a tomb—truly loved by a select few, but allowed to fade as a result of that incomparable personal relativity that no art historian could duplicate in their scholarly appreciation.

What would be the children’s eventual nostalgic indulgences are sacrificed for the sake of art preservation, leaving an empty hole that can never again be filled by embracing their personal relationship with the works of art. At the same time, the art will always be preserved in a museum or in someone else’s private collection, where people can go to hopefully gain some connection to the works of art. It’s no coincidence that Summer Hours is the second film produced by the Musée d’Orsay, after The Flight of the Red Balloon, which also starred Binoche. Yet curiously, the film seems to suggest in its narrative subtext that, in museums, artwork doesn’t have the emotional resonance of a privately owned piece that grows with its owner. It’s doubtful that the Musée d’Orsay intended for this, since the message feels contrary to what the thesis of a film produced by a museum should be.

Dramatically the family’s decision is heartbreaking, as punctuated by the final scene where Frédéric’s teen daughter remembers the painting of a field where she and her grandmother used to pick cherries. That painting was sold, and now the memories will never be as potent as they could be with the painting to illustrate it. Academically, their decision makes sense, if only for the personal satisfaction that in some small way their mother’s life is preserved in some institution dedicated to the conservation of art. Something like a sunnier and uniquely French Ingmar Bergman film, Assayas’ gentle storytelling is intimate and affecting, the actors’ performances warm and familiar. Berling, Binoche, and Scob are particularly good. Their natural acting and Assayas’ modest frame makes us feel less like we’re intruding through the apparatus of the camera, but rather that, we’re a part of their family. And how rare that a film coveys the subjective transcendence of art with such pitch-perfect quality, so that we feel a piece’s emotional significance in these very tangible characters. Delicately laced with sentiment and realism, few family dramas have the capacity to wrap around and comfort us as much as this one.