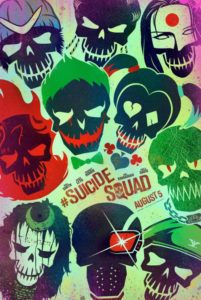 Suicide Squad arrives with the potential to reshape the faltering “DC Extended Universe” into a cinematic crossover worthy of Marvel. The film’s intriguing concept says it all: The government amasses lesser-known renegades and convicted killers from the pages of DC Comics into a covert team (think The Dirty Dozen), injecting a new and pointedly maniacal perspective into Zack Snyder’s personality-deficient Man of Steel and Batman v Superman: Dawn of Justice. With its comic origins harkening back to the 1950s, Suicide Squad could have been DC’s version of Guardians of the Galaxy crossed with the tough, irreverent attitude of Deadpool. Instead, writer-director David Ayer’s film reeks of desperation, offering a few moments of levity and humor, but not as much impiousness and joyful insanity as one would expect based on the concept and marketing campaign. Overall, it’s another superhero film housing too many characters—some of them over-written, some of them under-written, and few of them compelling—and a plot that exists to serve only itself.

On paper, Ayer’s own full-throttle, badass-obsessed jocularity couldn’t be more appropriate for the material. Time and again he’s depicted cops as ethically complicated and, in some cases, no more than criminals with badges. His early screenplays for Training Day and Dark Blue explored the sordid morality of law enforcement, while his later directorial efforts (Harsh Times, Street Kings, End of Watch, and Sabotage) became increasingly macho, hostile, and chauvinistic. Lately, it’s as though his writing itself had been injected with steroids, resulting in bigger muscles and a fizzed brain. He is more interested in attitude and violence than well-rounded characters or a cohesive plot. Given Ayer’s history, he’s working both in and outside of his comfort zone on Suicide Squad; he’s been saddled with his first PG-13 rating here, though he normally works in hard-R territory—an intentional choice no doubt enforced by Warner Bros. to ensure maximum summer returns.

The film picks up where Batman v Superman left off, with Superman dead and the U.S. government wondering how they’ll combat the growing “meta-human” threats. But before the film really begins, Ayer shows us two throwaway scenes to get Suicide Squad’s two central antiheroes onscreen first. Will Smith appears locked in a cell as leading gun-for-hire Deadshot, and the Joker’s psychotic girlfriend Harley Quinn (Margot Robbie) has been locked in a cage—both tormented by a snarky guard (Ike Barinholtz) inside the top-secret Belle Reve Penitentiary. Cut to Amanda Waller (Viola Davis), a steely government official who pitches her crackpot idea of putting out a fire with gasoline. Her “Task Force X” will be a team comprised of incarcerated super-villains acting as an expendable, deniable strike force that can be aimed at whatever opposition they’re assigned.

As Waller makes her pitch and goes down the roster of candidates, Ayer shoots each character introduction like a music video, offering a particular track to define each character. Leslie Gore’s “You Don’t Own Me” plays over Harley Quinn’s intro, and “House of the Rising Sun” by The Animals for Deadshot. This continues with nearly every member of the so-called Suicide Squad, prompting uses of Black Sabbath, Kanye West, The Rolling Stones, Rick James, Queen, The White Stripes, and Eminem. (They would all make for a great soundtrack to download; however, due to the licensing costs, the soundtrack in stores includes only covers, such as Panic at The Disco’s cover of “Bohemian Rhapsody”.) So much familiar music tries to make a connection with audiences the same way Guardians of the Galaxy’s seventies-inflected score did; except, there was an emotional reason within that film for its soundtrack, and there’s none whatsoever here. 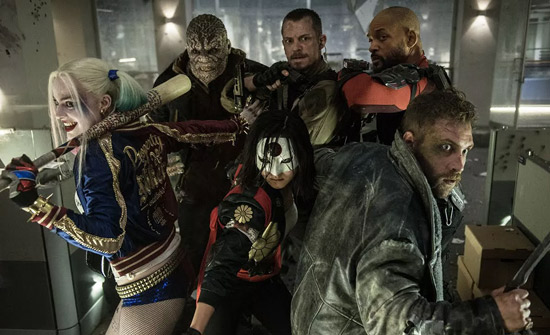 At any rate, Waller’s team consists of mostly one-note villains, and if there happens to be an added dimension to their rapidly communicated bios, it’s usually sappy. Alongside Deadshot and Harley Quinn is Captain Boomerang (Jai Courtney), a wild Aussie thief with a bladed boomerang; reptile-man Killer Croc (Adewale Akinnuoye-Agbaje) wishes he was treated like a normal guy; former gangland boss and tattooed firestarter El Diablo (Jay Hernandez) regrets scorching his family; and scientist June Moon (Cara Delevingne), whose body has been inhabited by a 6,000-plus-year-old witch. Waller assigns elite soldier Rick Flag (Joel Kinnaman) to oversee the supervillain group, knowing he’s fallen in love with June Moon and using that as leverage. Inevitably, something terrible happens, and Flag must assemble these reluctant heroes, all of whom are promised to receive commuted sentences for their efforts. And if they try to escape, there’s an explosive charge implanted into each member’s neck.

After their brief origin stories and character bios have been flashed upon the screen like blacklight-glowing statistics, thus establishing their super-powers and personal motivations, the team is assigned to a secret mission inside Midway City. But the overcrowding hasn’t ended yet. At the last minute, Flag adds Slipknot (Adam Beach)—another baddie who can “climb anything”—if only so the film can quickly dispose of him and remind the others who’s in charge. A moment later, Flag randomly invites along Katana (Karen Fukuhara), a noble martial artist with a sword that captures the souls of everyone to die by its edge. There’s also a wealth of government soldiers (among them, Scott Eastwood) assigned to watch our antiheroes and assist on the mission. If the dozen-or-so characters already mentioned weren’t enough, Ben Affleck appears briefly as Batman and Ezra Miller bolts into a scene as the Flash. Where are these heroes when Enchantress starts destroying the city? Who knows. And about that mission: Task Force X must stop Enchantress from casting a spell in Midway City that will allow her, and her recently unleashed brother, Incubus (Alain Chanoine), to take over the world. So, in other words, Waller brought together Task Force X for no other reason than to stop one of its own members.

Almost as an afterthought to the main plot, Jared Leto’s much-talked-about role as Joker appears mostly in flashbacks, or Harley’s memories. He’s a grossly underdeveloped presence in the film (Leto has said many of his scenes were cut, and admitted to being disappointed by his lack of screen time in the final cut). And worse, Leto’s performance proves disappointing. Much has been made of the actor’s tattooed body and face, his metal-capped teeth, eyebrow-less appearance, and winding Joker laugh, but whenever he speaks, it’s evident Leto hasn’t mastered talking around those silver teeth he’s been forced to wear—resulting in a hollowness in his mouth, almost as though he was asked to not let his lips touch when delivering his lines. Leto cannot help but stand in the shadow of Heath Ledger, but he’s also in the shadow of every other onscreen Joker. Still, we should point the finger at Ayer, not Leto. The script lacks anything exciting or interesting for the Joker to do, aside from revealing a few twisted details about how he charmed his former psychiatrist into becoming Harley Quinn, who, tragically, is little more than a scantily clad sex object desperate for affection.

Edited by John Gilroy in a way that would make Michael Bay proud, Suicide Squad delivers its meta-humans in meta-sized moments of staccato storytelling. Structurally, the assembly is scattershot, as Ayer drops flashbacks and cutaways into the proceedings without warning or relevance to the scene at-hand. The entire film was shot and cut like a trailer, not allowing its few intriguing characters ample time to breathe onscreen. The sole exception is Smith, who uses his generous charisma to give his role some worthwhile moments, even if Deadshot’s motivation is a cliché. Such moments are rare in Ayer’s overkill style, where everyone onscreen tries to out-badass one another. In another filmmaker’s hands, that notion might be interesting. In Ayer’s hands, you get a 6,000-year-old witch defiantly saying stupid things like “You don’t have the balls!” to unintentionally laughable effect. You also get overused phrases like “we got this” and “let’s do this” annoyingly delivered half-a-dozen times throughout the proceedings.

The result is dull, predictable, and feels more standardized than one would imagine, given the subject matter and its attempts to be the DCEU’s wildcard. This critic’s inner fanboy was hoping the critical consensus was overly harsh, and that Suicide Squad would’ve had more redeeming qualities. But Ayer tries to cram too many characters into the film, and even the 2-hour-and-ten-minute runtime doesn’t permit his ensemble to find a rhythm that coincides with its story. Not even allowing Ayer to work within an R-rating would have made the film feel any less strapped within the confines of a conventional blockbuster formula; and no amount of added swearing or bloodshed could have prevented it from being narratively convoluted, devoid of compelling characters, or put together so choppily. And while the influx of poor reviews won’t sway viewers seeing or even apologizing for Suicide Squad’s technical and narrative shortcomings, hopefully Warner Bros. will recognize their current output is a far cry from Christopher Nolan’s work in DC’s superhero realm and make a considerable effort to improve future projects.