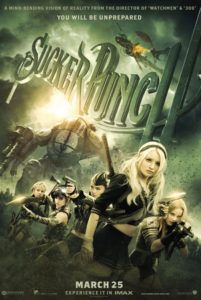 After enduring Sucker Punch, more than ever it can be said that director Zack Snyder’s first concern as a filmmaker is visual design, whereas storytelling comes in at a distant second. With the lucrative graphic novel adaptations of Frank Miller’s 300 and Alan Moore’s Watchmen under his belt, both distributed by Warner Bros., the studio gave carte blanche to Snyder as a ‘thank you’ to make his own cinematic comic book. Taking advantage of Warner’s good faith, Snyder and co-writer Steve Shibuya made a long list of teenage boy fantasies and crammed them all into one movie. Here you have Nazi zombies, dragons, robots, towering samurai, and orcs running amuck, and saving the day are fetishized heroines donning vintage stripper garb. Yet, while the erotic elements and bloodshed are kept to a minimum to preserve a PG-13 rating, the lack of adult content doesn’t make the result any less offensive to moviegoer sensibilities.

Components from Terry Gilliam’s Brazil are meshed with imagery from a dozen videogames to create a green-screen cyberworld assembled via slow-mo action sequences and unintelligible camera jerks. Comparisons to Inception will also be unavoidable, as both rely on stories that contain multiple levels of reality and the dream-within-a-dream device. Except, where Christopher Nolan’s film ties those levels together through a meticulously established story logic, Snyder shifts between the three levels of this jumbled mess whenever it damn well suits him. The excess knows no bounds, as we enter Snyder’s wildest imagination and discover there’s not much substance to be found—not that it’s very surprising, given his body of work. But now, with this being his first original screen story, there’s no doubt.

The scenario opens in an indecipherable period that looks like the 1950s, but contains modern music and weaponry that never quite congeals as a believable or comprehensible setting. Here a nameless pigtailed 20-year-old (Emily Browning) loses her parents and accidentally shoots her sister while trying to fend off advances from her sleazy stepfather. He has her locked away in the Lennox House for the Mentally Insane, where he bribes a resident slimeball (Oscar Isaac) to schedule her for a lobotomy in five days.

Meanwhile, the asylum’s Dr. Vera Gorski (Carla Gugino) teaches the all-female patients to escape into their own personal dreamland to cope with their harsh realities. In our heroine’s fantasy, she’s known as Baby Doll, and her asylum becomes a high-class whorehouse operated by Isaac’s shouting pimp named Blue Jones. Her fellow mental patients each adopt hooker names: sisters Sweet Pea (Abbie Cornish) and Rocket (Jena Malone), the resident Asian named Amber (Jamie Chung), and a brunette known as Blondie (Vanessa Hudgens). For whatever reason, the heroines visualize themselves in fishnet stockings, heels, high hemlines, low necklines, with batty fake eyelashes and lots of makeup. (Indeed, the mascara and eye shadow budget alone on Sucker Punch must have been astronomical.) Why a young woman nearly raped and then imprisoned by her family member would “escape” to a place where she’s objectified in schoolgirl outfits and other porno attire is beyond understanding, except to point out that Snyder wrote the material.

From within the whorehouse, the virginal “new girl” Baby Doll learns the ropes from her fellow hookers. When she dances for the first time in Madame Gorski’s studio, Snyder wisps Baby Doll away to yet another reality, this one pure fantasy, where Scott Glenn’s Wise Man tells her to gather up five items to escape her mental prison. Each item is contained within a videogame world of impossible bad guys and implausible battles, where Baby Doll and her superhero cohorts enter, heavily armed and dressed for S&M, to kick butt. When her fantasy is over, we return to the whorehouse where all onlookers cheer at the sexy dance they’ve just witnessed. Baby Doll does a number of dances, and during each she escapes into another cartoonish world where she attempts to obtain another item necessary for her escape. The three realities are arbitrary excuses for Snyder to voyage into outlandish territory. Shortly after the prologue, he all but abandons the mental institution reality to alternate between the whorehouse and the elaborate fantasies.

With all the discussion of dreams and alternate realities and Baby Doll “finding herself” in the process, Snyder packs on the thematic symbolism with as much subtlety as his three-story-high samurai toting a Minigun can provide. Take the soundtrack, on which each song contains allusions to the themes of dreaming and creating your own reality, including “Army of Me” by Björk, and versions of Eurhythmics’ “Sweet Dreams (Are Made of This)”, the Pixies’ “Where is My Mind?”, and Jefferson Airplane’s “White Rabbit” performed by Emily Browning. Each are used to eye-rolling effect, as though Snyder didn’t think hammering his audience over the head was enough, so he used a cannon instead. What’s more, Sucker Punch screens in 3D and IMAX, making the visual experience just as assaulting as the aural.

Snyder’s brand of filmmaking has never been very sophisticated, although occasional moments of visual bluster (and his entertaining 2004 remake Dawn of the Dead) have left the hope that, someday, he’ll make a film with an engaging narrative, or with as many well-written characters as there are visionary special FX shots. But Sucker Punch is unforgivably stupid, steeped in excesses, and wrought by Snyder’s every unchecked impulse.  His sex-object characters fill a backdrop of violent chaos and ridiculous visual stimuli, yet he has the audacity to include bookend narration that blathers on and on, in hopes that it will somehow bring profound meaning to the superficial nonsense in-between. But it doesn’t. And though Snyder has a popular following, enough to (unfortunately) earn him the director’s chair on the upcoming Superman reboot, it’s hard to imagine even the most desensitized viewer buying into this absurd disarray of overstimulation.