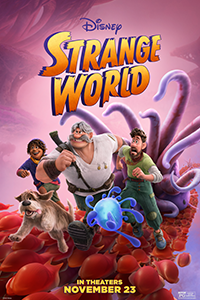 Disney’s Strange World is a lightly entertaining animated yarn in the tradition of Jules Verne novels, classic adventure serials, action comic books, and pulp magazines. From these science-fiction and genre building blocks, Qui Nguyen wrote a screenplay that’s admittedly derivative but no less as pleasantly escapist as its many antecedents. Produced by Walt Disney Animation Studios, the movie follows a family of explorers who, in their quest reminiscent of Journey to the Center of the Earth or The Mysterious Island, tackle issues ranging from generationalism to identity to environmentalism. Don Hall directs along with credited co-director Nguyen, who last collaborated on Raya and the Last Dragon (2021) to lesser effect. But their work here boasts some incredible images and inspired designs, plus a spirit of adventure that makes Strange World effortless fun. It all comes together with few emotional surprises, but it’s so charming and agreeable that even this Disney skeptic was convinced.

The story revolves around a family of explorers headed by muscular patriarch Jaeger Clade (voiced by Dennis Quaid), whose legendary manliness recalls a beefier Doc Savage or Allan Quatermain. Accompanied by his son, Searcher (Jake Gyllenhaal), Jaeger’s singular ambition lies in crossing the icy mountains surrounding Avalonia, their isolated valley community, to discover the future. But Searcher thinks their community’s destiny lies in pando—glowing tomatillo-like pods imbued with electricity. So after Jaeger disappears into the mountains on an expedition and never returns, Searcher spends the next 25 years farming pando and turning Avalonia into a city that resembles an old European village, except with more flying machines than a Miyazaki film. Since his father went missing, Searcher has made a comfy living alongside his pilot wife Meridian (Gabrielle Union), teenage son Ethan (Jaboukie Young-White), and three-legged dog Legend.

But when a pando blight threatens Avalonia’s livelihood, their leader Callisto (Lucy Liu) enlists Searcher—who’s soon joined by his whole family—for a mission underground to find and heal the heart of the pando plant’s interconnected root system. Once below the surface, Strange World comes to life thanks to the production’s animators, who create a world reminiscent of James Cameron’s Pandora from Avatar (2009), except mostly pink-hued. The eye-popping realm contains bioluminescent birds, rubbery coral grass, squishy droplets that move in streams through the air like fish, a floating cross between a jellyfish and a cloud, and hideous spidery octopods that move relentlessly toward their prey. Once the crew begins exploring, they stumble upon a blue blob that Ethan affectionately names Splat, who talks in squeaks like R2D2 and remains only slightly less cute than Legend (at one point, a character says of Splat, “I wanna merchandise it,” and doubtlessly, Disney’s marketers were thinking the same thing). Inevitably, Searcher also finds his long-lost father, now bearded and ragged, who has survived below for the last quarter century. 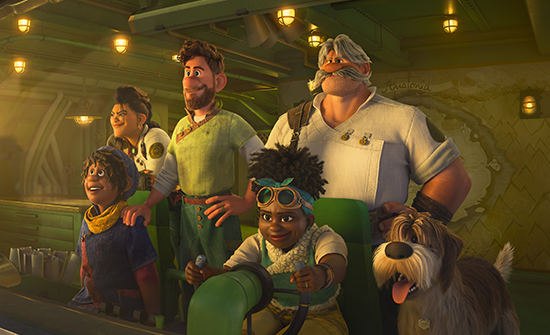 Strange World adopts the recognizable grammar of an old-fashioned adventure story, complete with swipe transitions straight out of Kurosawa (or, if you prefer, Star Wars). And while the movie earns points for exploring a luminous subterranean biosphere in a rip-roaring spectacle, it’s also about uncovering new frontiers of representation—for Disney, anyway. Take its matter-of-fact inclusion of LGBTQ+ characters. Ethan’s crush on a fellow teen boy, Diazo (Jonathan Melo), is a refreshing non-issue with anyone onscreen, even the traditionalist Jaeger. As firsts go, the movie marks the first appearance of an openly gay teen in Disney animation and a rare depiction of a multiracial family. The company has made strides to represent non-white cultures (Southeast Asian, Polynesian, Colombian, Chinese, et al.) in recent years with titles such as Moana (2016) and Encanto (2021). But it takes a more significant step in acknowledging that families can exist outside cultural communities and not be limited to ethnic siloes.

Instead, the movie’s thematic conflict centers on the Clade fathers and sons. The question becomes whether Ethan will follow Searcher’s passion and become a farmer or Jaeger’s macho desire to explore and conquer the wild. But just as Searcher didn’t want to follow his father’s path, Ethan doesn’t want to follow either path of the elder Clade men. Nguyen’s script resolves these intergenerational issues by suggesting that fathers should respect their sons’ desires for autonomy and hope that their sons become more than mere carbon copies. The theme is echoed in the plot, as Ethan’s identity supplies a solution, not by conquering or cultivating Nature as his father or grandfather might, but by finding balance. Admittedly, these themes materialize in sometimes unsubtle, telegraphed dialogue and details. For instance, Ethan plays a tabletop card game that becomes an obvious parallel to the ecosystem’s conflict, recalling Pandora once more in how every organism matters to the whole. But this leads to a welcomed message about how human energy usage has consequences in Nature.

Similar to Avatar, the narrative in Strange World may not be wholly unique, and it relies a bit too much on established formulas. But like Pixar’s Lightyear from the beginning of summer, the animation, voicework, and storytelling are so strong that one cannot help but be pulled along. Best of all, Disney continues to break from its usual template of conventional characters, giving them more to think about than their kingdoms, princes, and love interests. The movie also features a wrinkle in the proceedings that compels the viewer to think about the planet-wide ecosystem as a whole—and not a moment too soon. Overall, it’s pleasantly diverting and often a beautiful movie to behold. And while Strange World may inspire comparisons to other movies and books—a lot of them—it’s handled with such a light touch and momentum that it’s impossible not to admire what Hall and Nguyen accomplished.