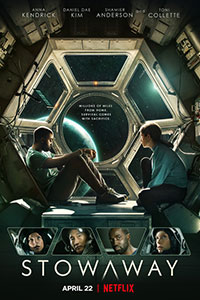 Intentionally paced and unshowy, Netflix’s Stowaway, directed by Joe Penna, considers the moral and scientific implications of a crew with an extra passenger on their mission to Mars. Similar to other recent films set in outer space, from Gravity (2013) to The Martian (2015), it explores the deadliness of space and problem-solving for survival. The production looks like those examples as well, offering a grounded pseudo-realism that doesn’t distinguish itself. But where Stowaway differs is its commitment to understatement, both in the performances by the four-person cast and Penna’s resistance to eye-popping spectacle. As a work of hard science fiction, it eschews the grandiosity of space and limits the proceedings to a cramped station. It’s always involving and features one breathless sequence; however, the film’s restraint and underdeveloped characters prevent it from leaving much of an impression beyond the end credits.

The film opens with a rocket ship launching into space with rattling intensity. The two-year journey will take the three-person crew to Mars. Commander Marina Barnett (Toni Collette) is the experienced and coolly practical leader who, after a slight discrepancy in their flight plan, demonstrates that she’s ready to abort the mission in an instant. She’s joined by Dr. David Kim (Daniel Dae Kim), an inward scientist who has sacrificed much, leaving a wife on Earth to pursue his scientific ambitions, and Dr. Zoe Levenson (Anna Kendrick), the doctor who wears her emotions on her sleeve. They work for Hyperion, a corporation that has cut corners by squeezing an extra scientist on a station built for two. But after 12 hours into their mission, Barnett discovers an unconscious stranger named Michael (Shamier Anderson) lodged behind a panel, and getting him out damages a vital life support mechanism that cleans carbon dioxide out of the air. When Michael, a member of the ground crew, comes to, he cannot remember how he got there.

Stowaway quickly and curiously abandons any question of how Michael ended up on the ship. After all, one doesn’t just seal themselves into an overhead compartment. Was he attacked? Did he sneak onboard? His concussion prevents any further questioning, and neither the three scientists onboard nor ground control—whose voices remain unheard in Barnett’s earpiece, creating a greater sense of the crew’s isolation—adequately explain the situation or press the issue. They can’t turn back, so solving the dwindling oxygen problem is more important. But there’s no miraculous fix or work-around from the technicians on Earth à la Apollo 13 (1995), and Barnett realizes that the limited oxygen reserves mean Michael will have to die if the others are to survive and complete their mission. Yet, despite the mystery behind his presence on the station, Michael seems like a nice guy. In fact, all of them are decent people, except that Michael is nonessential to the mission. 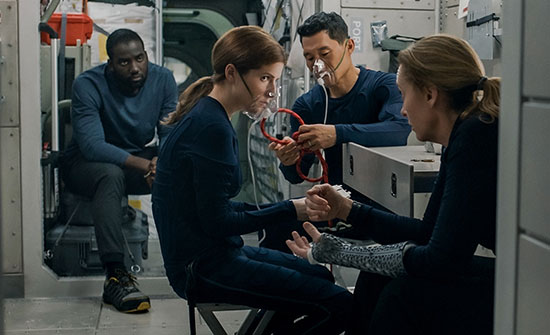 Writers Penna and Ryan Morrison seem to draw from Tom Godwin’s short story “The Cold Equations,” first published in a 1954 issue of Astounding Science Fiction. However, the material receives no onscreen credit. Godwin used the scenario to raise questions about making an impossible decision. Though Penna and Morrison question the morality of “the needs of the many outweigh the needs of the few” logic, they also miss an opportunity to confront race. As two white women and an Asian man debate about the value of a Black man’s life, it cannot help but reflect something about race today. And yet, Stowaway never goes there, not even in a throwaway line. It remains cleanly situated in the predicament at hand, deviating only for the occasional, albeit brief, emotional display. In a way, the material is refreshingly simple; in another way, there’s not much substance to the story.

A Brazillian musician and YouTube star, Penna has added filmmaking to his talents over the last few years. His 2018 debut, the survival drama Arctic, proved he could keep his audience rapt in a desperate situation with limited characters. The same is true of Stowaway, though the visual treatment here proves more ambitious than his freshman effort. Marco Bittner Rosser’s production design keeps the interiors functional, if less cramped than actual space stations, and somewhat reminiscent of the working-class corridors in Alien (1979). It looks like someone put planet Earth in a dryer when characters look out the windows, reminding us that their station is always spinning to create artificial gravity. Most of this looks believable and unobtrusive aside from a memorable tether climb in the last half-hour; the same is true of the almost nonexistent score.

For those wondering what it all means, Stowaway features a few heavy-handed flourishes courtesy of the Levenson character to explain. At one point, she tells Michael a story about how she once swam out to a drowning man, knowing she might not be able to save him, only to find herself and the man miraculously rescued—a convenient parallel to the current situation and Levenson’s refusal to give up hope. This, along with a last-minute bit of narration in a film otherwise devoid of it, puts too fine a point on the film’s themes. Still, the cast does a fine job with the material. Collette always brings emotional veracity to her characters, while Kim and Anderson’s de-emphasized performances lend their characters humanity. Kendrick seems somewhat misplaced at first, though she’s earned our investment by the final scenes. Altogether, Stowaway is a modest work that doesn’t pack much of a punch, though sci-fi enthusiasts could do worse.