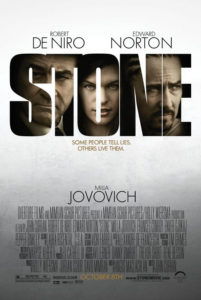 Don’t be fooled by the noirish setup of Stone, an existential drama of sorts that establishes the foundation of a thriller in the first act, and then abandons that groundwork for some ineffectual soul searching in the second and third acts. Not only is the film not a thriller, but it doesn’t quite meet the weighty expectations of a thoughtful drama either. Director John Curran (The Painted Veil) does such a poor job of helping his audience understand his four central characters that, because we never quite grasp their motivations, we are left uninvolved and watching from outside, disconnected from the events therein. This is unfortunate, since Curran demonstrates vast technical skill, just as the actors here do wonders with the material. Yet, neither the all-around strong performances nor craftsmanship behind the camera can make the script by Junebug scribe Angus MacLachlan any more coherent.

Robert De Niro returns to his first purely dramatic role in years, starring across from Edward Norton once more after their 2001 collaboration on The Score. These are two of today’s best actors, but both have fallen from notoriety in recent years. De Niro associates himself almost exclusively with commercial comedies these days, each one more obnoxious and painful to watch than the last. But Norton prefers independent projects (like Leaves of Grass) with the occasional mainstream fare (like The Incredible Hulk) in between, each new production fuelling the Hollywood rumor that his demands for artistic integrity make him difficult to work with. And in their performances here, De Niro and Norton show that they’re still capable of greatness, even if the film itself proves an incoherent mess.

As disillusioned corrections officer Jack Mabry (De Niro) finishes up his last month before retiring from a more than 40 year career, his final case involves an inmate up for parole after 8 years of a 10-15 stretch.  Stone (Norton), a braid-haired hood convicted of arson, is so desperate to get out of prison that he asks his wife, Lucetta (Milla Jovovich), to seduce Jack and convince him to go easy on her husband in his report to the parole board. Lucetta doesn’t mind, though, as the assignment more than meets her nymphomaniacal tendencies. And Jack proves an easy target, awakened from his loveless marriage to his wife, Madylyn (Frances Conroy), who through years of being disregarded exists as a human shell. Stone’s plan takes an unusual turn, however, when he has a religious epiphany after witnessing a fellow inmate murdered.  Now Stone behaves as if he doesn’t much care if he’s released; he’s more concerned about being God’s “tuning fork” in his vaguely described religious breakthrough. But is Stone’s behavior authentic or just part of his efforts to convince Jack to sign off on his parole?

In a dialogue-driven story, Curran blends the development of Stone’s case with a religious search whose purpose is beyond vague. Throughout the picture, car radios play rabid Christian talk radio and Curran fills the backdrop with religious imagery. The characters search for spiritual truth as they consider their place in the world, with some of their resolutions believable character developments, and others emerging simply to push the story forward. Madylyn remains a devout Christian, her faith tied to the Bible and communal Sunday worship; Lucetta believes in nothing; Stone has attached himself to an autonomous soul searching cult; Jack doesn’t know what he believes. Introspective characters weigh their views on religion, death, and the afterlife, and they seem to build toward some grand meaning that will bring Curran’s muddled structure together. But when the film ends, none of the questions raised by the characters are answered, and their own personal revelations are so thinly described that they’re impossible to understand.

Regardless of whether Curran meant the film to be a thriller or an existential drama, Stone feels jumbled and unsure of itself. This is another unfortunate truth about the film, given the potential in the cast alone. De Niro and Norton need a project that re-validates them as credible actors and injects them back into the heavy-hitters of acting, and Jovovich could explore her talent if only she’d take roles that didn’t require her stripping or killing zombies. When it’s all over, the ending doesn’t feel like a conclusion so much as a random stopping point, leaving the audience to question what the film is about. Some filmmakers (Terrence Malick, for instance) can handle ambiguity and still maintain a cohesive feel to their work, but Curran demonstrates he doesn’t have such rare talents, and his film suffers for it.