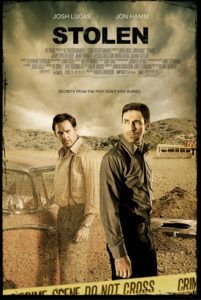 Stolen could’ve been the feature film that transitioned the career of Jon Hamm, star of AMC’s acclaimed television series Mad Men, from TV to movies. In fact, it should’ve been. But instead of proving himself worthy of cinema, he leaves audiences wondering whether or not Hamm has the acting chops needed to make it in the pictures. It’s a shame, really, because Hamm is a fine actor. He sports jet-black hair, a chiseled jaw line, and has classic good looks. Maybe he was born to play Superman (think about it, Warner Bros.). He displays incredible range on his scathing little cable show, so, for his would-be breakout release, why didn’t he pick a better movie than this?

As emotionally overwrought as thrillers get, this one connects two interweaving stories about fathers with kidnapped children. Present day, Det. Tom Adkins (Hamm) searches for his son, who went missing some eight years ago. He’s consumed by the memory of his boy, while his wife Barbara (Rhona Mitra) wants to declare their son dead and move on with life. Tom’s obsession becomes worse when construction workers uncover the body of a child buried in the earth for over fifty years. When he died, the boy would’ve been the same age as Adkins’ child, so Adkins feels a desperate need to solve this case. And when he starts to examine the details, he realizes there might be a connection between the unearthed body and his own son’s kidnapping.

Meanwhile, in the rugged 1950s backwoods, widowed father Matthew Wakefield (Josh Lucas, also a co-producer) searches for work with his “slow” son John (Jimmy Bennett, the young Kirk from Star Trek). Little does Matthew know that when he takes a job at a local construction site, a child murderer spots John and, given the present day story, you can figure out what happens. The stories connect when Adkins pieces together the rather bland string of clues to find the kidnapper, and through his journey finds some sense of closure. But the audience, who can guess the killer from the outset, has little to keep them involved.

The script comes from Glenn Taranto, whose inexperience is apparent in every ham-handed scene. What’s worse, first-time director Anders Anderson doesn’t have the skill to improve the material. He shoots the story with technical faculty but without a hint of finesse. Anderson seems preoccupied with finding inventive-but-obvious ways of transitioning between the modern story and the one fifty years prior, as if the audience was going to forget they were connected. A jet passes overhead and slowly changes over to a biplane from the past—there are a number of these sequences. The palette of the modern era story is bluish, more natural, whereas the story in the past appears rusty and rough like an old photograph. These are all obvious choices, so obvious that they prove mildly insulting.

The film made its way through the festival circuit in 2009 and earned some attention specifically because it was Jon Hamm’s first leading role in a feature film. Understandably, IFC picked up the release no doubt thinking Hamm’s popularity would garner it some attention. The movie, which was originally named The Boy in the Box, was again renamed from the melodramatic title Stolen Lives to the more understated Stolen. But no matter the title, this thriller, if that’s what it’s supposed to be, never comes close to reaching a boiling point, neither dramatically nor in terms of suspense. If Hamm was trying to finally break into features, he would’ve done well to pick material that didn’t feel like a made-for-TV movie.