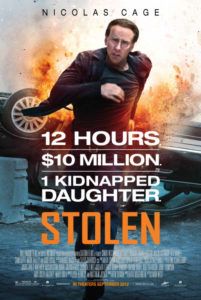 Pilfered, pinched, snatched, lifted, and the title of Nicolas Cage’s latest action vehicle, Stolen, are all synonyms for “taken”, which, as you probably know, was also the title of that diverting Liam Neeson actioner from 2008. Aptly named, Stolen is the cinematic equivalent of a synonym, the same movie but different than Taken. Like Neeson did, Cage stars as a father desperately racing around the criminal underworld to find his kidnapped daughter. Oh, sure, there are differences, but they’re superficial at best. The earlier movie took place in Europe and featured sex traffickers as the culprits; the events in the latter movie occur in New Orleans and involve a more personal, but far sillier, reason for the kidnapping. Add on an excess of genre movie clichés to another in Cage’s string of one-note performances, and suddenly a potentially C-grade rehash of a B-grade actioner becomes a D-grade flop.

How much of a flop, you ask? Quite a colossal one. Cage’s action movies—namely those produced by his production company, Saturn Films—have become so bad, so uniformly recognized as garbage, that they’re no longer receiving wide distribution. Originally set for a September 2012 release, Stolen reached only a handful of theaters around the U.S., which is about half the theaters of Cage’s other 2012 action dud, last March’s Seeking Justice. At least I found that movie playing nearby. Stolen never made it within fifty miles of the Twin Cities, and the distributors at Millennium Films didn’t even bother with a VOD push (often the last refuge for direct-to-video worthy material), as they did with their last Cage release, Trespass.

Cage stars as master thief Will Montgomery, who just doesn’t seem like the master thief type. When his latest job, robbing a bank, goes sour, Will goes off to jail for an 8-year stint, while his shady and comparatively dimwitted partner Vincent (Josh Lucas) suffers on the streets with no loot. Will finally gets out and finds his teenage daughter Alison (Sami Gayle, a cross between short-haired Anne Hathaway and short-haired Emma Watson) has been taken by Vincent, now a cabbie, and locked in the trunk of his ever-mobile cab for payback, and for a $10 million ransom. In desperation, Will attempts to elicit the help of his lawful arch-rival, Det. Harlend (Danny Houston), who doesn’t believe Will’s story but keeps tabs on the ex-con nonetheless. Will turns to another former partner, reformed thief Riley (Malin Akerman), and together they plot to gather the ransom in the ever-predictable “one last job”.

Though Cage still has the potential for ingenious-albeit-over-the-top acting (see Knowing, Kick-Ass, or Bad Lieutenant: Port of Call New Orleans), he requires a compelling, layered character to play. “Compelling” is not a word to describe Will Montgomery, whose actions are limited to running about in a panic and shouting into cell phones. But then, we’ve been fed such a steady diet of lackluster Nicolas Cage performances that he’s hardly the sole reason for a movie’s failure anymore. We’re used to it. The element that turns Stolen into an unintentionally funny romp is Lucas, who appears scarred, long-haired, and peg-legged after 8-years of bad luck in Will’s absence. As Vincent, Lucas snarls his lines and tries to act tough, all the while looking more out of place than Bradley Cooper in The Midnight Meat Train. (NOTE: It should be pointed out that Lucas starred in another bad movie also called Stolen in 2010, that one worse for its sheer ineptitude.)

Cage reteamed with director Simon West for this movie, having served under the helmer of Con Air, that cornball $225 million box-office smash from 1997. Since then, West’s own track record has been spotty at best, including Lara Croft: Tomb Raider and more recently The Expendables 2. For all of Stolen’s downfalls, West knows how to compose an action sequence without an overreliance on today’s shaky-cam norms; however, this doesn’t mean that we give a damn about what we’re seeing, shaky or not. Everything onscreen is dull and yet desperate to be clever, the score by Mark Isham going for a hip 1960s vibe to create a loose association with Soderbergh’s Ocean’s Eleven. Such musical cues might work for the inane robbery sequences, but elsewhere they feel out of place, especially with the finale’s violent one-on-one confrontation. What’s clear is how screenwriter David Guggenheim (Safe House) watched Taken, liked what he saw, and wrote something similar. But the uninspired result fails to function even on the level of a guilty pleasure.