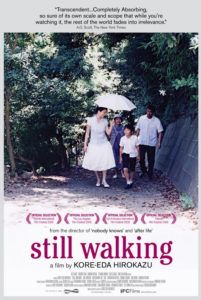 The Yokoyama family gets together once a year to remember the life of their departed Junpei, the eldest son and most respected of three children, who died long ago while saving one of his classmates from drowning. Heir to the family name, Junpei left broken loved ones behind, and a growth of resentment eats away at everyone inside. Some refuse to look past what would’ve been had this tragedy not occurred; others are tired of hearing about Junpei’s death. Japanese writer-director Hirokazu Kore-eda observes the family through his tender frame in Still Walking, a wonderful, deceptively simple drama IFC imported from Japan.

Of course, inside the Yokoyama home, there are no outbursts of emotion, unlike what might be shown in the American family drama equivalent of this film. There’s always something happening under the surface throughout the picture, and it’s never forthright. There are no direct confrontations, and therefore there are no resolutions. Their story, told mostly within the 24-hour period of their somber reunion, contains feelings that are hidden and only slyly hinted at; it becomes the audience’s duty to read these characters and wonder about missed opportunities for reconciliation.

The second son, Ryota (Hiroshi Abe), despises going to his parents’ home because he feels, well, secondary whenever he’s around his family. Father (Yoshio Harada) supported the family as a successful doctor, and Junpei had intended to follow in those footsteps. But because Ryota has settled on art restoration—though he’s now out of work, a secret he tells his own family to keep from his parents—he feels, perhaps rightfully so, that his family would’ve preferred that he died. Ryota’s new wife, Yukari (Natsukawa), and stepson are treated like guests instead of family by his parents, and they feel like outsiders as well.

Mother (Kirin Kiki) pretends to be welcoming, but long visits from her children can be too exhausting. She has a cruel streak in her that emerges in one of the film’s most powerful scenes. A young man arrives to pay his respects to Junpei’s shrine. This is the man their son died saving. He’s fat, humble, and awkward. What’s worse, he’s done very little with his life; he’ll never become anything important. Not like a doctor. After he’s gone, the family admits it should’ve been him, but Ryota feels sorry for him and suggests they don’t invite him again. Mother says she’ll keep inviting him every year, forever, if only to indirectly remind him of the pain he’s caused. It makes her feel better knowing that he feels he should have died.

The story takes place almost entirely in the Yokoyama home, most of the interactions around lunch and dinner. Several scenes occur where conversations are in one room, but in another room, someone sits, waiting to be included or feeling sour about their family members. Ryota and his father have these moments most of all, since they bear the most bitterness toward one another. And yet, all around there’s potential for healing. They’re still family, after all. If only they would talk and apologize for their mutual stubbornness. If they could forgive then maybe they could live happily ever after. But that’s not what this film is about—it’s far too aware of how families really work for that.

Kore-eda’s style reflects that of the great Japanese director of family dramas, Yasujiro Ozu, whose Toyko Story (1953) was recently named on Sight and Sound magazine’s top films poll, composed by the world’s leading film critics. His approach holds the same temperate sensitivity as those affecting masterpieces from Ozu’s extensive filmography, resisting melodrama or blatant exposition. Assemble yourself a marathon of titles from these two filmmakers, and you’ll find yourself more tuned into how families operate.

Still Walking is composed of a collection of long stationary shots, very little music, and lots of silence. Kore-eda expresses so much through pauses in the conversation or quiet ruminations on something seemingly straightforward. Consider how the yellow butterfly is used both as a symbol of Junpei’s spirit for his mother and as a device through which we see how Ryota will pass down his parents’ influence, no matter how much he railed against them when they were around. Kore-eda’s film is insightful, moving, perceptive, and appropriately complex in the exploration of its subject. It’s hard to imagine a more parallel example of Ozu’s style, which despite undeniable similarities, completely resists any accusations of pure imitation.