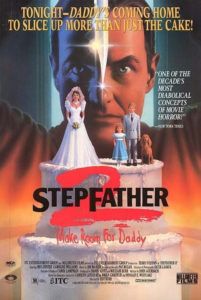 There’s a particular kind of viewer who just reads the title Stepfather 2: Make Room for Daddy and laughs, realizing the potential for some good, corny entertainment. Chances are, if you’re reading this review, you’re one of those people. This sequel to the minor 1987 hit, which starred Terry O’Quinn in a surprisingly layered performance, may not have the illusion of drama that its predecessor had. But what it does have is a unique horror movie sequel approach. Instead of replicating the formula of the first, it continues the story from a plausible point of view, even if it does resort to some trashy slasher movie exploits in the process.

At the end of The Stepfather, O’Quinn’s sociopathic murderer was presumably dead, killed by the wife and stepdaughter he tried to slay when they disappointed him so. You see, his character comes from a strict upbringing bent on achieving the ideal family unit. He travels from place to place, only to the very best neighborhoods across America and, assuming false identities, he finds himself a lonely single mother to woo and marry in hopes of achieving this ideal. But they always disappoint him in the end, resulting in a bloody mess. When the movie opens, it seems the killer survived after all. Of course he did—how else would they make a sequel?

Locked inside an insane asylum, our killer is treated by a sympathetic Doctor Joseph Danvers (Henry Brown), who encourages him to build small models of suburban homes to work out why he craves the perfect family. But Danvers regrets ignoring safety protocol when he’s stabbed to death during the killer’s escape. After seeing an ad for the perfect family neighborhood of Palm Meadows, the killer picks his spot; he assumes the name Doctor Gene Clifford and fronts himself as a family therapist. During his faux sessions, he gets to know his divorcee neighbor. Carol Grayland (Meg Foster), who, along with her teenage son Todd (Jonathan Brandis), could make him the perfect home.

If it weren’t for Carol’s ex-husband trying to reignite a dead flame, and Carol’s suspicious best friend Matty (Caroline Williams) exposing Gene’s false past, then Gene wouldn’t have any bodies to hide (while insanely ranting “Make room for daddy!”). And once people begin to disappear, questions are asked. Questions lead to doubts, and doubts lead to a showdown on Gene and Carol’s wedding day. After the groom tries to kill the bride with the wedding cake serving knife, it’s difficult for any couple to patch things up. Go figure. Indeed, the stepfather never gets the opportunity to become The Stepfather, which, along with the prologue in the institution, is the atypical part of this otherwise heavily clichéd slasher.

Some strange elements make this viewing experience rooted in oddity, starting with the creepy-looking Meg Foster, best known from her appearance in John Carpenter’s They Live. Her dead, pale blue eyes and eerily calm voice have more potential to give an audience the willies than anything The Stepfather might be doing. At any moment, the viewer expects this vampirish actress to sprout fangs for a From Dusk Till Dawn-worthy twist. Then her son is played by the late Jonathan Brandis, star of TV’s It miniseries and SeaQuest DSV. This child star’s celebrity faded slowly throughout the 1990s and he eventually hung himself in 2003, lending a disturbing off-screen edge to his onscreen appearance.

But Stepfather 2 isn’t so much scary as it is ironically hilarious. Dated by 1980s fashions and some hammy acting outside of O’Quinn’s performance, the sequel, along with its predecessor, make for two of the best bad movies you’ll ever see. This is a flick you watch at home with a bowl of popcorn and the lights on. You talk all through it with friends who enjoy sarcastic commentary. This brand of bad movie is unique, because even while being bad, it allows the viewer to relish its awfulness and transform the experience into something enjoyable. This doesn’t happen often, but when it does, you should savor it.