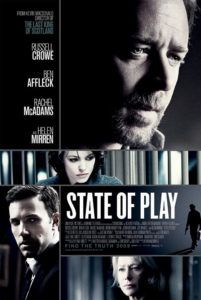 Everyone says print is dead, that electronic media have taken over for all time and the newspaper will inevitably crumble. And maybe that’s true. But there’s a certain lingering credibility with print, isn’t there? As if, because there’s a tangible paper or magazine in your hands, the story therein remains as substantial as the object itself. Whereas online journalism can be accessed in a virtual environment and written by virtually anyone, there’s a traditionalism with print reporting that has skewed in recent decades into something twisted and desperate. These are undercurrent themes in State of Play, the political thriller based on the BBC miniseries of the same name, which almost had me believing the scenario was more concerned with its commentary on the diminishing state of print than providing diversionary entertainment. Almost. The film was directed by The Last King of Scotland helmer Kevin Macdonald and rides on potboiler formula, wherein clues are followed by the crack investigative reporter who dodges bullets in his pursuit to uncover the conspiracy.

This cliché character, Cal McAffrey, is played by a grubby and intuitive Russell Crowe as the off-the-cuff reporter that everyone seems to know and respect because he’s seen it all. Though he’s the veteran, he’s paired with new blood Della Frye (Rachael McAdams), his paper’s online blogger who is either his partner or competition, to cover a political scandal involving a mysterious death on Capitol Hill. Of course, their research leads to a much more complicated and interesting puzzlebox. May as well call them Woodward and Bernstein. They work for “The Washington Globe,” one of those movie newspaper offices whose cubicles look assembled from stacks of random papers, a place where the bustle never stops its hustle. Their editor (Helen Mirren) harps about the demands of the new corporate owners; concerning herself with selling papers more than telling the truth, she doesn’t care if the story is sensationalism, she just wants to make a deadline. McAffrey is an idealist, however, like most great reporters, searching for objectivity but disillusioned by his dwindling market and Frye’s burgeoning one. This dynamic of varying ideological approaches toward journalism is what lends the ensuing plot impressive weight beyond your typical conspiracy yarn.

While digging up dirt on the apparent suicide of the top researcher for Congressman Stephen Collins (Ben Affleck), with whom Collins just-so-happened to be sleeping with, Frye finds that  McAffrey defends the politician because they were best friends in college, and because McAffrey loves Collins’ wife (Robin Wright Penn). So McAffrey takes over the story with Frye at his side, and upon closer inspection discovers that the facts point to murder. Turns out that the billion dollar firm PointCorp has probably murdered Collins’ assistant to cover-up her findings on their practices in privatized military (i.e. mercenary) operations, which Collins has targeted in his crusade on Congress.

This material could really go either way, depending on the cast. Screenwriters Matthew Michael Carnahan (Lions for Lambs), Tony Gilroy (Michael Clayton), and Billy Ray (Breach) reduce the content of Paul Abbott’s 6-hour miniseries into a serviceable movie, but it’s the performances that carry the experience. Crowe was nominated for two Oscars and won another because he’s an affable onscreen presence, even if he’s not displaying the limits of his acting bravado in this performance—he’s a star that never ceases to provide impressive acting chops. Mirren is fantastic, as expected. Affleck looks his part. McAdams serves her purpose. But the smaller supporting roles like Jeff Daniels as a corrupt politician and Jason Bateman as a sleazy PR rep stand out.

Macdonald shoots rather plainly, but what else can we expect from this documentary filmmaker accustomed to capturing rather than propelling a screen story? Acknowledging in the end that print journalism will ultimately always have its place as long as good reporters keep at it, State of Play makes a blindly optimistic implication that contrasts its several realist characters. Themes on modern journalism aren’t explored to their fullest; however, they’re addressed in such a way that makes the audience feel like there’s something more consequential here. And since there’s the obligatory-if-mildly unsatisfying “twist ending” to anticipate, recommending this tightly-wound yarn is easy, even if the subtext were preferably more explicit.