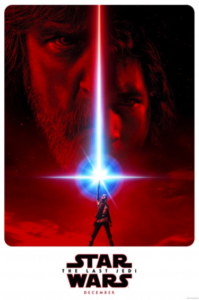 Star Wars: Episode VIII – The Last Jedi arrives with a measure of freedom, being disencumbered from the responsibility to restart the franchise that beset (and some would argue hampered) its breezy predecessor, director J.J. Abrams’ The Force Awakens. Rather than dwelling on nostalgia or trying to recreate our fond memories of the original trilogy with blatant parallels to George Lucas’ 1977 original, the new film carves out its own identity. In fact, that very notion finds a thematic strain in the narrative as several of the film’s characters place a distance between themselves and their earlier counterparts. In a key scene, the temperamental Kylo Ren (Adam Driver) destroys his helmet, which he crafted to echo that of Darth Vader, vowing to uncouple from the lingering associations between himself and those who came before him. A similar act of symbolic detachment is carried out by Rey (Daisy Ridley) after finally learning the truth about Luke Skywalker (Mark Hamill). Indeed, while The Last Jedi is brimming with adventure and the spectacle of its swashbuckler-in-space roots, more importantly, it’s a sweeping melodrama that contains no end of deconstructionist ideas about what makes a hero, The Force, and the Jedi religion.

For all of its revisionist thinking, inevitable comparisons will be made between The Last Jedi and The Empire Strikes Back, since this second entry in Disney’s new trilogy contains many of the same story elements that defined the second chapter of Lucas’ original trilogy: it expands on the mythology of the series in theatrical ways; the story breaks up the main characters for smaller, individual missions; the central hero trains on a far-away planet, under the tutelage of an old master; the young trainee sees herself in a quite literal dream; secondary characters engage in a more militaristic mission; a few shocking turns and double-crosses occur; and some familial revelations will surprise viewers. (Perhaps it goes without saying at this point, but many of the film’s most significant developments will be discussed in detail throughout this review. Consider yourself warned.)

Regardless of The Last Jedi‘s structural similarities to The Empire Strikes Back, Rian Johnson—the first solitary writer-director to tackle a Star Wars film since Lucas was credited as the original’s sole writer-director—delivers a different kind of Star Wars film on purely formal and narrative terms. Having tested his hand in emotional, complex science-fiction with 2012’s superb time-travel mind-bender Looper, Johnson has gradually developed from a low-budget filmmaker (his breakthrough Brick, an inventive high-school noir from 2005, began a career that has continued to advance with every project) into a key player in Disney’s future Star Wars films (he has been commissioned to start an entirely new trilogy in this universe, independent from the tales involving Luke, Leia, Rey, and Kylo). Teaming with his longtime cinematographer Steve Yedlin, The Last Jedi looks like one of Johnson’s films, but it also looks like a Star Wars film, and perhaps that says something about his passion for the franchise. 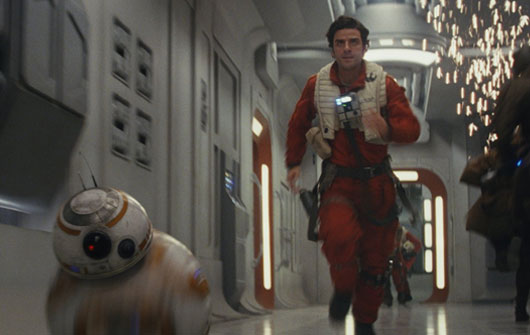 The film opens just after the events of The Force Awakens, as the Resistance, led by General Leia (the late Carrie Fisher), attempts to escape the clutches of the evil First Order. During the escape, hotheaded pilot Poe Dameron (Oscar Isaac) goes against his orders by launching a small-scale attack that, when backed by the few remaining Resistance bombers, gets a lot of “rebel scum” killed. The Last Jedi alternates between the First Order’s pursuit of the Resistance and Rey training with Luke Skywalker. Rey has flown the Millennium Falcon to find Luke in seclusion on “the most unfindable place in the galaxy,” and Johnson makes excellent use of that stirring last shot of The Force Awakens, where Rey hands Luke his lightsaber, by turning the moment on its head. Luke has lost faith in The Force, and he proves a reluctant teacher. Meanwhile, the Resistance tries to evade capture in a protracted chase, as General Hux (Domhnall Gleeson) has somehow found a way to track their convoy even after a hyperspace flight.

Much of the second act drags and meanders, proving unnecessary to the plot. Low on fuel and locked in a high-speed chase, the Resistance convoy keeps the First Order at a relatively safe distance, but Leia is injured during the ongoing pursuit and replaced with the purple-coiffed Vice Admiral Holdo (Laura Dern). With just a few desperate hours before they’re overtaken, Poe, unwilling to follow Holdo’s uncertain plans, concocts a ridiculous scheme to send Finn (John Boyega) and Rose (Kelly Marie Tran), an impassioned rebel, to a casino planet to find a codebreaker. Once they secure the codebreaker, they can sneak onto the First Order’s ship and briefly disengage their ability to track through hyperspace. This curious detour to a galactic French Riviera halts the film’s forward momentum (it’s as though one of the passengers in John Ford’s Stagecoach took a horse from the coach and went on a separate mission). Worse, it ends up utterly pointless when their plan falls through and their stuttering codebreaker (Benicio Del Toro) double-crosses them.

The Last Jedi‘s midsection may feel bogged down by a needless deviation, but the rousing finale contains several impressive scenes of action and lightsaber dueling. After learning about The Force from her disenchanted instructor—specifically, how the Jedi are hubris-ridden hypocrites to think they’re the only people entitled to wield a power that surrounds everyone and everything—Rey believes she can turn Kylo toward the light on her own. A psychic rapport has somehow formed between them across an expanse of light years, and they now have a conspicuous bond through telepathic conversations. She resolves to confront Kylo and, with his help, they destroy this film’s resident Emperor, Supreme Leader Snoke (Andy Serkis, under a rubbery CGI motion-capture performance), during a breathless sequence. But this only emboldens and does not quell the monster inside of Kylo. Realizing she’s failed, Rey joins the Resistance for the final battle on a nearby planet coated with salt, which has a red soil underneath (a striking image reminiscent of Crimson Peak). Kylo leads the First Order against the last remaining Resistance fighters, and he faces Luke in a tense duel that recalls the last living moments of Obi-Wan Kenobi in A New Hope. 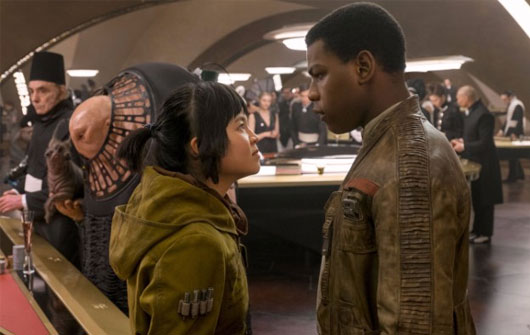 Johnson’s screenplay results in a mind-wandering 152-minute runtime that sags in the middle (as suggested, everything involving the casino planet and Del Toro’s character proves inconsequential to the plot). Nonetheless, the writer-director incorporates revisionist ideas about the Jedi and Star Wars that go against what fans often celebrate about this franchise. His characters observe how the past and its traditions do not matter, despite the franchise’s ingrained mythology. Snoke remarks more than once that Kylo has failed to become the next Darth Vader, and perhaps out of his failure, perhaps after killing his father, Kylo resolves to “let the past die” and become his own man. Elsewhere, Rey hopes to find a living legend in the Jedi warrior Luke Skywalker, but instead, she finds a broken monk that has lost faith in his order. Finn and Rose learn that anyone can become a hero, no matter how insignifcant—and several characters learn this same lesson. When Rey discovers her decidedly modest lineage, combined with Luke’s skepticism toward Jedi precepts, it becomes evident that bloodlines do not make heroes; a person’s willingness to do what is good does.

Johnson touches on themes that resonate in our present culture war, infusing The Last Jedi with an overt ideological perspective. Although hardly intentional given that Johnson’s script was finished before the 2017 election, the film opens in an age where controversial politics and nepotism go hand-in-hand, and associations cannot help be made between the Trump family takeover of Washington and the First Order’s leadership (thus making the Nazi parallels even more frightening). Johnson questions the authority of heritage, suggesting that The Force is something not exclusive to a noble few. Throughout multiple story threads, he remains critical of the super-rich and how they acquire their means, as well as those who jealously hold onto their power. Johnson’s film also calls for animal rights in a subplot on the casino planet, where Finn and Rose liberate large racing dogs; he condemns the eating of meat in a comical sequence wherein Chewbacca thinks twice before chowing on a birdlike Porg, a resignedly cute trifle; and he censures both slavery and child-labor as well. To be sure, this is the most political and socially reflective of all Star Wars films.

Johnson’s formal approach is also revisionist, but fans may balk at alternative flourishes that threaten to betray the formal toolkit commonly used by filmmakers in this series and feel dissimilar from the standard formal model of a Star Wars film (though the usual swipes and transitions remain intact). Take how, during the initial Resistance escape, Rose’s sister Paige (Veronica Ngo) must release several bombs at the right moment. Johnson drops all diegetic sound and engages in slow-motion to heighten the tension, a familiar device in many other action films, but the tactic seems out of place in a Star Wars film. Johnson also plays with sound when he drops all audio except the dialogue in psychic conversations between Kylo and Rey. Similiar formal oddities appear throughout, making The Last Jedi feel less connected to other episodes in terms of its technique: Consider when Johnson interrupts the usual forward thrust of Star Wars films with a rare flashback. Or later, cinephiles may note that The Last Jedi is the first episode to make direct reference to another, non-Star Wars film. While other episodes draw inspiration from established films, the most obvious being Akira Kurosawa’s The Hidden Fortress (1958), none has been so bold as to borrow exact lines from Terry Gilliam’s Brazil (in a nod to the dreaded form, the “27B-6”). 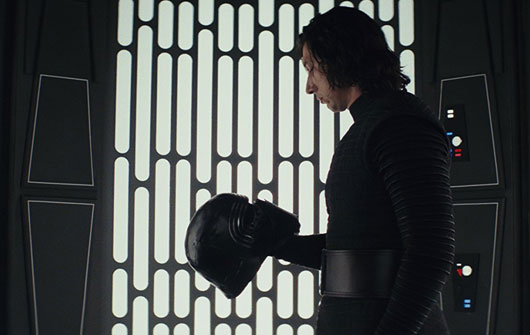 The Last Jedi alternates between material that either inspires celebration or feels strangely out of place, if not inconsistent or overly cutesy. Fortunately, there’s more of the former category. In the failing camp: the inclusion of (admittedly aww-inspiring) Porgs to sell stuffed animals and videogames; the slow-motion used throughout the film; toad-like nuns used for comic relief; the sudden disappearance of Han Solo’s charms in a universe where people, but not inanimate objects, fade into nothingness upon death; Leia’s return from the vacuum of space by way of her never-again-referenced use of The Force; and the frustrating reality that Snoke, and his horrible facial scars, will remain a villain devoid of any backstory. Obviously, most of these observations are mere quibbles. More triumphant are Driver, Ridley, and Hamill’s impassioned performances; the final lightsaber battle with Kylo and Rey; the continued energy of Boyega; and Johnson’s investment in his film’s thematic and political integrity.

Whatever issues this review may have explored or nitpicked, The Last Jedi both honors and expands upon the mythology of Star Wars, while also providing the necessary, popcorn-munching escapism. The film even boasts some laugh-out-loud moments of wit and humor—the opener’s radio prank was hilarious, even if it seemed ill-suited for a Star Wars film (the misplaced meta-humor is a trend throughout the film). But Johnson’s film supplies the requisite spectacle that casual fans expect, while devoted enthusiasts have new, complex ideas to consider for the franchise’s future. The Last Jedi gives audiences much to think about; unfortunately, some of that thinking is done during the film, instead of after it. Even so, Johnson’s desire to push forward and alter the Star Wars universe in substantial ways remains brave and bold, making the film’s uneven pacing and few missteps negligible next to the sheer scope, acting prowess, and thematic ambitiousness of the episode.