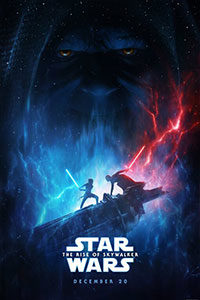 If Rian Johnson upset a segment of Star Wars fans by subverting expectations and taking the franchise in a new direction with The Last Jedi (2017), then J.J. Abrams could be faulted for not following the new course with his sequel, Star Wars: Episode IX – The Rise of Skywalker. Johnson’s divisive film introduced alternative ideas and thematic deviations into the Star Wars mythology, inventing sometimes oddball story elements (Leia using the Force to pull herself through space) that clashed with the first six episodes overseen by George Lucas—whose integrity Abrams jealously preserved in his entertaining 2015 reboot, The Force Awakens. Some of The Last Jedi‘s detractors felt that while change is welcome and needed for a franchise to endure, Johnson’s film did not follow the episodic progression implied with Star Wars’ roots in Saturday matinee serials. The Last Jedi is a well-made film, often gorgeous and thrillingly acted, but in the sequential order of things, it sticks out like a sore thumb. After Johnson’s film incited ridiculous protests and online petitions to have it stricken from the canon, the Disney overseers have attempted to course-correct with The Rise of Skywalker, a cinematic apology to fans for tampering with their hallowed grounds.

That’s where Star Wars fandom stands today. The discourse about films of this sort has degraded to such a degree that viewers now demand studios make their franchise movies in the manner they expect and feel entitled. All else is jettisoned, denied as a part of their selective reality. When the theatrical version of Justice League (2017) underwhelmed, online communities demanded that Warner Bros. release director Zack Snyder’s original cut. When The Last Jedi challenged the rules of Star Wars, fans clamored and asked that it be stricken from the record and remade. And if The Rise of Skywalker is any indication, Disney listens to the most vocal protestors and endeavors to appease them. After all, the House of Mouse desperately wants to gratify fans, if only to ensure the billion-dollar potential of each new Star Wars film. Given such pandering and the ever-discontent fanbase, Star Wars has become, for this critic, a low, exhausting state of affairs that discourages further enthusiasm about anything having to do with this franchise. 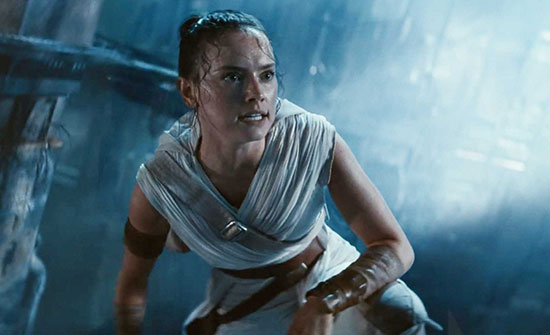 Star Wars has been wildly inconsistent from the start. Plot holes and story inconsistencies run rampant throughout the original trilogy. Later, Lucas’ abortive prequel trilogy, marred by early CGI characters that appear laughable by today’s standards, cheapened the franchise by demystifying the originals. Meanwhile, Disney’s now-complete trilogy has a manic dramatic arc, reflected by the wildly impulsive motivations of Rey (Daisy Ridley) and Kylo Ren (Adam Driver), who teeter-totter between the Dark Side and the light, often within the same episode. Whereas the first two trilogies each have an overarching story that spans their three films, Disney’s Star Wars output seems to be making it up as it goes along. Everything from the individual episodes and maligned spinoffs (Rogue One and Solo) feel like nothing more than disorganized fan fiction. It’s a studio trying, desperately, to manage its audience rather than tell a story. As a result, the characters from The Force Awakens rarely feel like the same characters from The Last Jedi or The Rise of Skywalker.

With that in mind, Abrams’ new episode, which he co-wrote alongside Chris Terrio (who wrote Justice League no less) from a story with contributions by Colin Trevorrow and Derek Connolly, tries to reset the franchise’s forward momentum to something resembling where he started with The Force Awakens. Abrams has already established himself as Hollywood’s defacto rebooter of franchises (see his Mission: Impossible III and Star Trek). And while his latest stops short of pretending The Last Jedi never happened, it uses a considerable amount of energy on shifting the overarching story away from where Johnson had pointed it. Instead, he concentrates on satiating the audience with nostalgia and correcting the perceived mistakes of the past. For instance, Abrams tidies up the plot holes that have existed since The Empire Strikes Back (1980), where Leia (Carrie Fisher) was propped up as “another” hope in place of Luke, but nothing ever happened with that. In The Rise of Skywalker, there’s a brief flashback of Luke (Mark Hamill) training his sister in the ways of the Jedi, which would explain why she has Jedi abilities later in life.

While Abrams builds upon the integrity of Johnson’s film with flashbacks that explain why Leia had the Jedi mastery to pull herself through space, he’s less generous elsewhere. On the question of Luke’s monk-like solitude and aversion to the ancient Jedi texts in Johnson’s film, Luke makes a stark admission here: “I was wrong.” Indeed, Abrams undoes many of the most potent alterations in The Last Jedi, such as moving the story away from Johnson’s rallying theme built around the average nobody. Abrams also rethinks the last film’s sudden shifts in character. Kylo Ren, who destroyed his Darth Vader-inspired helmet in Johnson’s film in an act of independence from his grandfather’s example, repairs the mask now, making him look appropriately fractured. After all, as a result of the back-and-forth between Abrams’ and Johnson’s films, cracked identities are what drive Disney’s trilogy. Ever split between his draw to the Dark Side and his parents’ hero legacy, Kylo Ren can’t decide which path to take. Neither can Rey, who was led to believe her parents were nobodies in The Last Jedi. However, Abrams changes that too, revealing a twist that not only upends Johnson’s film but better justifies her impulse to reach into the darkest corners of her identity. In this film, she once again must confront her Dark Side, personified by a hooded evil twin with a double-edged lightsaber. 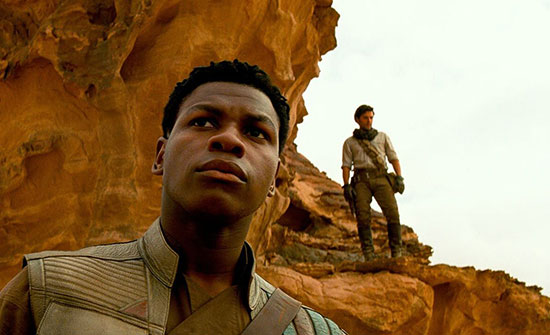 When The Rise of Skywalker opens, everyone’s looking for Emperor Palpatine (Ian McDiarmid), whose presence has returned to the galaxy in the form of a Frankensteined-together cyborg. As it turns out, Palpatine has been controlling the voices in Kylo Ren’s head, using the puppeteered Snoke, clones, and astral projection (or something) to build the empire’s First Order into the new “Final Order” for his hooded, chanting Sith army. Palpatine even promises Kylo Ren the galaxy if he kills the last remaining Jedi, Rey. In another part of the galaxy, our heroes—Rey, Finn (John Boyega), Poe (Oscar Isaac), Chewbacca (Joonas Suotamo), and a posse of droids—scramble to find Palpatine on the hidden planet Exegol, but to do that, they need a MacGuffin called a Sith Wayfinder. Abrams and Terrio have structured most of their film around gathering one MacGuffin that leads to another MacGuffin and so on, propelling our heroes from one planet to the next in search of a plot device. Much like the superfluousness of The Last Jedi’s casino planet interlude, there’s a subplot or two that feel unnecessary, giving the film an excuse to check fan service boxes. All the while, Rose (Kelly Marie Tran), so important in Johnson’s film to establish its themes that anyone can be a hero, has been reduced to a minor supporting role.

The extraneous plotting pushes the runtime over 140 minutes, which gives the filmmakers ample time to engage the viewer’s sense of nostalgia and bring finality to the nine-episode saga. Abrams has exhumed beloved characters and images from earlier films to accomplish this farewell-of-a-movie, which attempts to close the “Skywalker Saga” that began with The Phantom Menace (1999)—technically, A New Hope (1977). Besides the resurrected Palpatine, Luke Skywalker and Han Solo (Harrison Ford) make appearances as a ghost and a projected memory, respectively. In a different sort of resurrection, the late Carrie Fisher, who died in 2016 before The Last Jedi hit theaters, appears as a CGI character constructed of outtakes from Johnson and Abrams’ previous episodes—demonstrating that Disney no longer needs actors to create convincing performances (admittedly, the effect looks better than the young Fisher in Rogue One). Both Chewbacca and C-3PO meet their demise in The Rise of Skywalker, and each of them experiences a type of rebirth a few scenes later. Billy Dee Williams appears once more as Lando Calrissian, looking relaxed in a role he last played a quarter-century ago. The film even dredges up the Death Star. The resurrection motif becomes tiresome, if only because it spends more time reflecting on the past than advancing the story. But then, that’s just what Abrams does.

Even as major characters show up for their obligatory goodbye to the fanbase, the few innovations in the film remain uninspired, confusing, and downright silly. The Rise of Skywalker introduces the idea that Rey’s powerful grasp of the Force allows her to miraculously heal injuries, a skill she masters on the first try, despite her abilities proving unwieldy in another scene that leads to an accidental shuttle explosion. Also, running with an idea from The Last Jedi that Kylo Ren and Rey converse using Force-based telepathy, Abrams mounts psychic lightsaber duels where the boundaries of each duellist’s location begin to overlap with the other. He takes this idea even further when psychic projections become tangible objects, leading to a type of lightsaber teleportation in one scene. The bond between these two characters also has some curious implications about the sheer power they share when together, but I’m not sure I understand it, perhaps because, like most everything else in this film, it’s breezed over—including a last-minute romantic turn. At last, in the final duel between Palpatine and Rey, they fight as “All the Sith” versus “All the Jedi” in a ridiculous battle of energy beams that settles the matter once and for all (for now). 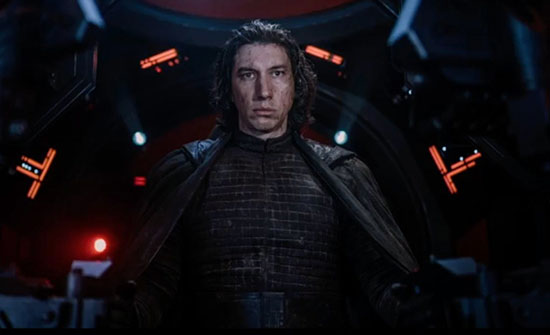 This is a deliriously paced film that barely leaves a moment for the viewer to process what’s happening. That comes later. If his other work is any indication, Abrams is a propulsive director of action driven by faces, chases, and places. His films rush from one disaster to the next, during which the viewer cannot breathe, much less absorb every plot detail. In the first scenes, the Millenium Falcon zips through an ice shaft, pursued by enemy fighters, while the characters spout expositional dialogue amid the occasional “That was a close one!” It’s difficult to say what’s happening or why, but boy, is it exciting. Editors Maryann Brandon and Stefan Grube maintain the film’s breakneck pacing, yet they hardly leave time for us to access the emotional center of these characters and their many motivational shifts. Later, Kylo Ren and Rey’s lightsaber duel on the Death Star’s half-submerged ruins, an image of grandiosity to be sure, goes on and on ad nauseam. But there’s no consequence to the scene, apart from neat-looking action. Abrams has directed The Rise of Skywalker into meme-worthy moments that have no greater consequence, but they can be easily shared on social media to facilitate cultural saturation.

Capably made but misguided in its attempts to satiate its fanbase, The Rise of Skywalker marks some kind of end to the franchise. It’s a film that tries to please everyone and, in doing so, crams so much into its harried story that it seldom feels inspired. The sheer number of reference points, callbacks, phantoms, and delusions in this film leaves too much to disentangle with any logical acceptance. But nostalgia isn’t about logic; it’s about emotions, and the feelings of preciousness about the original trilogy have sustained millions of moviegoers through more bad episodes than good in my estimation. Taking a step back and looking at this new trilogy, Disney’s Star Wars episodes have proven quite erratic, robbing the material of its serial appeal. When so much about Kylo Ren and Rey proves almost bipolar, it’s difficult to invest oneself in their fates as heroes or villains. Much like its immediate predecessor The Last Jedi, the viewer’s lizard brain leaves the theater thoroughly entertained. Maybe that’s enough to justify a bucket of popcorn and some escapist viewership, but not much more.