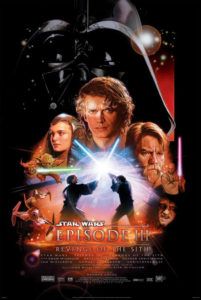 “I have a bad feeling about this,” says Ewan McGregor’s Obi-Wan Kenobi early in Star Wars Episode III: Revenge of the Sith, as he and his arrogant apprentice Anakin Skywalker (Hayden Christensen) race their fighter jets into the closing outer doors of an enemy ship. To be sure, audiences felt the same way after director George Lucas’ previous two episodes, The Phantom Menace and Attack of the Clones. Each was emotionally flat and visually cartoonish entries in the Star Wars saga. Fortunately, Revenge of the Sith corrects at least one of those problems by boasting sharp visual FX much improved over the three years since Lucas first spearheaded the movement toward digital filmmaking with his (failed) experimentation on Attack of the Clones. This final chapter in Lucas’ six-part mythology still has a number of dramatic dead spots and wooden acting courtesy of Christensen and his costar Natalie Portman, but as a technical achievement there is no better entry in the Star Wars prequels. What’s more, it remains the only episode in Lucas’ prequel trilogy that deserves to be called a space opera.

Most of the remaining questions about the original Star Wars trilogy are answered in Revenge of the Sith, as Lucas’ prequels set out to lay bare rather than deepen the mythology of the original films. Many critics, die-hard fans, apologists, and even casual spectators find putting together the pieces in Lucas’ jigsaw puzzle a rewarding exercise in itself. Seeing how this or that scene informs a pivotal moment in the original trilogy becomes a process of acknowledgment, whereby the familiar viewer says “So that’s how it happened,” and through that recognition, identifies a moment of dramatic irony at some point in a later episode. Indeed, Lucas’ drama operates on a repetitious cycle where Anakin loses a hand during a key battle, like Luke in The Empire Strikes Back; or, more than once Anakin must make an important decision as Ian McDiarmid’s Palpatine zaps someone with Jedi electricity, just as he does in Return of the Jedi. With examples aplenty, Lucas’ reliance on such reverberations throughout his saga lacks a thematic constant such as Yoda (or someone) saying something like, The Force drives history to repeat itself. He reserves that acknowledgment for the audience, and writes the recurrences off as coincidence.

Worse, the prequels deflate the dramatic swell of the original trilogy by revealing twists long before their prime moment. Imagine that you’ve never watched a Star Wars film and you decide to finally view them according to their episode number, prequels first. In this scenario, Lucas effectively spoils the best dramatic turns in latter films through the course of Revenge of the Sith. He reveals that Anakin-cum-Darth Vader is Luke Skywalker’s father, ruining a pivotal moment from The Empire Strikes Back. He reveals that Luke and Leia are siblings, corrupting the reveal in Return of the Jedi and making the romantic tension between the triangle of Luke-Leia-Han Solo extremely awkward. Additional links to the original trilogy were planned, including a scene with a 10-year-old Han Solo and a sequence explaining that Palpatine created the virgin-birthed Anakin from midichlorians, but both ideas were abandoned. Nevertheless, the spoiling goes on and on, diminishing the impact of the original trilogy until watching them, too, becomes a dramatically inert experience. Beyond the crimes of shoddy storytelling and digital filmmaking Lucas has perpetuated in his prequel trilogy, their influence on the original films is their worst quality of all.

Despite the lengths Lucas goes to eliminate all mystery, Revenge of the Sith manages a number of intense action sequences and pleasurable diversions. The sly, manipulative political machinations of Chancellor Palpatine as he rises to the status of Emperor, and as he twists Anakin toward the Dark Side, also prove effective. The film opens with an elaborate space battle—a zooming dogfight where Anakin and Obi-Wan must maneuver through a maze of spacecraft and robots into the ship of General Grievous, the coughing cyborg leader of the Separatist droid army led by Count Dooku (Christopher Lee), to rescue the kidnapped Chancellor. Once aboard, Anakin and Obi-Wan engage Dooku once more, and under the influence of the Chancellor’s goading, Anakin beheads Dooku in a fit of rage. General Grievous escapes capture, and the Jedis regroup on the city planet Coruscant. There, Anakin rejoins Padmé (Portman), who announces she’s pregnant, although the two must keep it secret, as Jedis are not allowed to marry or have offspring. Meanwhile, Palpatine appoints Anakin to the Jedi Council, but because of his inexperience, they refuse to grant Anakin the title of “master” and instead order him to spy on Palpatine, thus driving a wedge between himself and the Jedi order.

Several interwoven conflicts reach a climax, each of them focused on Anakin, his allegiance to Palpatine, and his betrayal of the Jedi. Obsessed with visions that Padmé will die during her impending childbirth, Anakin learns the Dark Side may be able to save her. When the exceedingly boring Mace Windu (Samuel L. Jackson) confronts Palpatine about being a member of the Sith, Anakin finally turns evil and helps the newly christened Emperor. Now dubbed “Darth Vader” (although the significance of the name “Vader”, or “Darth” for that matter, is never explained), Anakin proceeds to eliminate whomever the Emperor wishes gone—including youngling members of the Jedi school and the remaining separatists hiding on the volcanic planet Mustafar. At the same time, Obi-Wan takes out General Grievous, and Yoda engages a diabolically giggly Emperor in a duel with no winner. The finale involves Padmé confronting Anakin, who suddenly wants to overthrow the Emperor and “rule the galaxy” with her at his side. He continues to irrationally blame Obi-Wan for everything, and through the course of their duel, loses his legs, his other arm, and nearly burns to death.

Revenge of the Sith ends on an unintentionally laughable note. After Padmé dies giving birth and naming her children Luke and Leia, the Emperor’s droid doctors mend Anakin and build him into the iconic, black-suited Darth Vader. Like Dr. Frankenstein, Palpatine raises his monster on the slab. Vader, now voiced by original vocal performer James Earl Jones, asks about Padmé. The Emperor lies and says Vader killed her on Mustafar. Vader breaks free of his restraints, his arms and legs seemingly without joints to bend, like Boris Karloff under green makeup. He shouts “Noooooooo!” for an inordinate amount of time, and here it becomes a challenge not to laugh, a challenge at which this critic fails upon viewing, no matter how many times I see it. Yet, it should be a powerful moment, given it signals the beginning of Anakin’s death until Return of the Jedi. At any rate, long before this moment, the viewer should have been asking themselves why Anakin, often called “the chosen one”, has not sensed the Emperor’s lies or at least that Obi-Wan and Padmé were telling the truth when they claimed to be on Anakin’s side. Indeed, Anakin’s foretold prowess becomes suspect and, throughout all six films, never seems to outperform Obi-Wan, the Emperor, or even Luke Skywalker. But I digress.

By the end of Revenge of the Sith, one must look back at the events in the prequels with a raised eyebrow, thinking skeptically that the Emperor orchestrated these events in order to gain control and “bring peace to the universe”. Such a scheme becomes almost laughably elaborate upon reflection but, I suppose, that’s what makes the Emperor a fearsome villain. Of course, much of the intended suspense in Revenge of the Sith is nonexistent because of our knowledge of the original trilogy. Obviously, no one will meet their demise when the Emperor and Yoda duel, nor when Obi-Wan and Anakin duel. A few shocks along the way come when Vader slaughters children and most of the Jedis die in unceremonious ways. The pleasure of the experience, if you can call it that, involves seeing events come to pass that you already know happened, but aren’t exactly sure how they happened. Because the stakes are at their highest in Revenge of the Sith, the experience is more involving than its prequel predecessors, but only marginally so.

Lucas’ screenwriting does not improve over the course of the prequels. His characters speak in two modes, either in flat and unemotional bureaucratic dialogue or over-the-top melodramatics. Romantic exchanges between Anakin and Padmé still consist of cheap verse (“Hold me, like you did by the lake on Naboo. So long ago when there was nothing but our love. No politics, no plotting, no war.”), and Yoda’s particular brand of sentence structure grows tiring when it reformats common action movie phrases (“Not if anything to say about it I have.”). Statements like this just sound silly. Luckily, the actors appear to put more effort into their roles, especially Christensen, who is far less unintentionally unnerving in this episode. The film’s settings are just as polarized between the dreary and the outlandish—the dull CGI backdrops of the Jedi Council hall and Senate chambers are counteracted by the grandiose, and quite absurd, volcano planet. (After all, the volatile land around volcanoes constantly shifts; building a base on such terrain seems like a terrible idea.)

On a technical level, the special FX used to render environments, cityscapes, and spatial vistas are nothing short of impressive, with only a few moments where it becomes obvious that the actors are standing in front of green/blue screens. The film’s spectacular, fast-moving light saber fights entertain, as they’re expertly choreographed and performed without benefit of stunt actors (McGregor and Christensen performed their own duels, CGI jumping and flips aside). Even the creature designs feel more inspired this time around, including a bird-like lizard that Obi-Wan rides during his attack on General Grievous’ base. Perhaps Lucas learned a lesson after reading negative reactions to the subpar and artificial looking FX in Attack of the Clones; if only he had experimented with digital wizardry and photography much earlier, the first two episodes of his prequel trilogy may have been more watchable. Alas, only Revenge of the Sith returns Star Wars to a realm nearing the originals, at least on a purely visual level.

By and large, Revenge of the Sith earned positive critical and fan assessments, not to mention $380 million at the U.S. box office (The Phantom Menace grossed $431 million; Attack of the Clones made $310 million). But the third and final George Lucas-written and directed Star Wars film still cannot match the singularity of any entry in the original trilogy. Regardless of its visual merits, Lucas’ emphasis is more on action and FX than on accomplished writing or well-directed performances. What Mark Hamill once called Lucas’ “smash-and-grab” approach to directing is alive and well throughout the prequel trilogy. The final prequel is an escapist viewing, and undoubtedly a considerable improvement over the other prequels, but its worth is only substantial in comparison to its previous two installments. Much of the energy and vitality of the original trilogy remains absent from Revenge of the Sith, its reliance on the earlier films to inform its narrative, stilted characterizations, and cliché dialogue remain unrecoverable hindrances. The experience isn’t fun; rather, it’s the best of three chapters in Lucas’ dull prequel saga, which isn’t saying much.