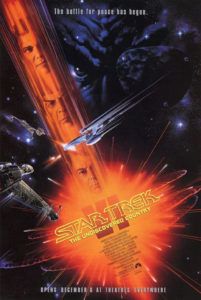 Star Trek VI: The Undiscovered Country presents a departure from the idealistic architecture established by Gene Roddenberry’s Star Trek-verse. The 1991 sequel tackles issues of racism and prejudice inside a spy-thriller scenario fraught with political intrigue. A far cry from romanticized space exploration or even the actionized science-fiction of earlier Star Trek films, the film has much to say about the history and future of Star Trek, and some of what it says is quite critical. Designed to celebrate the 25th Anniversary of the original Star Trek series, The Undiscovered Country also makes way for a new Enterprise crew of Star Trek: The Next Generation, which gathered a loyal following since first airing in 1987. However uncharacteristic much of the film proves to be, director and co-writer Nicholas Meyer delivers its complicated ideas in an entertaining, fast-paced package that remains underappreciated by most Star Trek fans in favor of more simplified conflicts—such as Meyer’s earlier Star Trek film, The Wrath of Khan.

With Star Trek’s anniversary looming, Paramount Pictures scrambled to conceive a cinematic way of commemorating the franchise’s history up to that point. Among the proposed ideas were a story where Kirk and Captain Jean-Luc Picard from The Next Generation meet, and former producer Harve Bennett pitched “Top Gun in outer space,” where the young Kirk and Spock attend Starfleet Academy. Though both ideas were rejected, they were revisited in the coming years in Star Trek: Generations and J.J. Abrams’ reboot Star Trek. Finally, Paramount greenlit Leonard Nimoy’s concept of closing out the original Star Trek crew’s tenure by ending their long-running conflict with the Klingons, thus signaling the end of one era and the passing of the torch to The Next Generation crew. The Undiscovered Country would be the last cinematic voyage for the original crewmembers (at least together in one film), and yet it doesn’t sentimentalize them; rather, it reframes everything that was canonized by three television seasons, five movies, and countless followers around the world.

Indeed, this is a much darker film than the others, strewn with political commentaries and fatalistic notes about the end of an era. Upon its release, the film was particularly relevant, since the Berlin Wall was being demolished between 1990 and 1992. After all, the Federation has always been very American, whereas the Klingon Empire were Cold War creations meant to reflect the Soviet Union. Now that the Cold War was ostensibly over, maintaining a conflict between the Federation and Klingons seemed pointless, dramatically speaking. (The Next Generation had hoped for such an end years prior, when they introduced a Klingon crewman, Lt. Worf, as part of the Enterprise crew). As U.S.-Soviet relations improved, Nimoy and his story collaborators Lawrence Konner and Mark Rosenthal considered the consequences of people giving into their mistrust of other cultures, and therefore putting peace between two warring peoples at risk. Meyer and Denny Martin Flinn developed the concept into a clever conspiracy-thriller in space, applying hearty references to naval jargon and endless Shakespearian quotes for added gravitas.

The film opens with a bang. Former helmsman Sulu (George Takei) now captains the starship Excelsior, and while on patrol, an energy blast hits his ship like a squall hitting a fishing boat. Light years away, the Klingon moon Praxis has detonated, obliterating their main source of energy, as well as their home planet’s ozone layer, thus forcing the nubby-headed warmongers to make peace with their enemies. Being the most experienced crew in the Federation’s Starfleet, the Enterprise troop is rustled out of their retirements for that ever-discussed “last mission” that always proves to be second-to-last. Kirk (William Shatner) and company, none-too-keen on Klingons, are begrudgingly assigned to meet the ship of Klingon dignitary Gorkon (David Warner)—a visual amalgamation of a Klingon, Melville’s Ahab, and Abraham Lincoln—and escort his ship back to the Federation, where Gorkon will begin peace talks. After an uncomfortable and tense welcome dinner, where cultures clash to disastrous effect, both parties retire to their respective ships. All at once, the Enterprise fires on the Klingon ship on its own, after which two masked figures from the Federation board Gorkon’s ship and assassinate him.

At least, that’s how the killing was meant to look. Spock (Nimoy) launches an investigation on the Enterprise, assisted by his new Vulcan replacement-in-training Valeris (Kim Cattrall), and supposes that individuals from both the Federation and Klingon sides have conspired to keep the war going. Meanwhile, lifetime soldier General Chang (Christopher Plummer, excellent), a one-eyed Klingon desperately accustomed to the warring ways between his Empire and the Federation, accuses Kirk and Dr. McCoy (DeForest Kelley) of being assassins, and a tribunal sentences them to life on a wintry penal colony planet none-too-fond of Starfleet. Along with the help of shape-shifter Martia (Iman), they attempt a desperate escape to prove their innocence. At the same time, Spock zeroes-in on the culprit and discovers the makings on a conspiracy with Valeris, Chang, and others at the center. Being a Vulcan, Valeris’ reasons were not purely villainous; she makes what she believes is the logical choice to protect the Federation from a violent, untrustworthy species—sadly, her logic is prejudice.

As mentioned, The Undiscovered Country presents a Cold War parallel, with the potential armistice between the Klingon Empire and the Federation standing in for that between the former Soviet Union and the United States, complete with all lingering prejudices. Following that parallel, appropriate undercurrents of racism and archaic stereotypes between the two parties come through in the dialogue. One Federation general calls Klingons the “alien trash of the galaxy” and wants to “bring them to their knees” rather than negotiate peace. Kirk remains the worst of them all. “They’re animals,” he says. “Let them die.” During a scene in his quarters, Kirk recovers from a night of Romulan ale and looks at a picture of his son, David. His long-ingrained prejudice against Klingons had only recently been solidified during The Search for Spock, when a Klingon killed David, and now Kirk blames the entire Klingon species for the incident. The emotion-driven Kirk cannot conceive of peace with the Klingons based on his years of bad experiences; whereas Spock, bent on logic, doesn’t understand the reasoning behind Kirk’s rage, and instead he sees the prospect of peace idyllic.

There’s hope, however, even for a lifelong racist like Kirk, played by Shatner in perhaps his finest, most three-dimension portrayal of the character. At one point the Enterprise captain asks, “How on Earth can history get past people like me?” A valid question, given what transpired over dinner conversation earlier that evening. Chang remarks, “‘To be or not to be?’ That is the question which preoccupies our people, Captain Kirk. We need breathing room.” Kirk responds unbelievably: “Earth, Hitler, 1938.” And when Kirk confronts Spock on why the Enterprise was chosen for the mission, given his palpable hatred for the Klingons, Spock replies, “There’s an old Vulcan adage, ‘Only Nixon could go to China.’”—the first of many references to human history adopted by another culture in the film. By the film’s end, Kirk still remains somewhat dismissive of other species, albeit wiser. “Everybody’s human,” Kirk insists. Spock raises his eyebrow and rightfully notes, “I find that remark insulting.”

Both Kirk and Chang are depicted as men fearful of change, so attached to the past that they oppose anything new. In that sense, largely based on Meyer’s authority, the film dramatically diverts from the original Star Trek ideal created by Roddenberry. In both The Wrath of Khan and The Undiscovered Country, Meyer deconstructs Star Trek from its futurist romanticism to its tactile sheen. Meyer rubs away the glimmer of the Enterprise itself, until the corridors feel claustrophobic and gritty. He roots the sci-fi jargon in naval vocabulary and creates parallels between the interstellar world and the marine one. Though Roddenberry desired a future more reliant on ideals, Meyer proposed realism and suggested that humans are still flawed individuals despite their advancements. Meyer’s approach and success on his previous Trek film outweighed the sometimes dreamy conceptual approach of Roddenberry, whose narrative model was as fantastical as the science in his science-fiction yarn. Only when The Next Generation television series began did Star Trek writers attempt to embrace a new political and scientific realism into the franchise, which strived for idealism but admitted ideals are impossible to attain. Deep Space Nine would further complicate matters, exploring political atrocity and war in Roddenberry’s future-verse.

Meyer best illustrates this movement from idealism to realism in his frequent references to Shakespeare, whose romantic texts are fraught with tragedy and drama, just as life after the black-and-white conflict between the Federation and the Klingon Empire is nothing short of ambiguous. The end of the Federation-Klingon struggle means an end to classicism, and so those clinging to that conflict quote Shakespeare. Namely, Kirk and Chang. Chang’s dialogue is almost completely composed of references to Hamlet, Julius Caesar, and The Merchant of Venice, among others, each given a double-meaning by the script. Even the title comes from Hamlet’s soliloquy. In a questionable attempt at humor, Gorkon claims, “You have not experienced Shakespeare until you have read him in the original Klingon.” However silly and nonsensical this line proves to be within the film, doesn’t it make sense that the Klingons, so dedicated to honor, would engulf themselves in the theatricality and romanticism of The Bard? Especially for Chang, who refuses to surrender to his longtime opponent, and in the end chooses an honorable death in battle over submitting to a post-modern way of life.

As The Undiscovered Country planned to pass the torch to The Next Generation cast—“All things end,” says Spock in an early scene—the film itself proved to be one of the most technically impressive of all Star Trek films. Early 1990s computer animation helped create the enthralling sequence where Federation assassins board a gravity-less Klingon ship and leave several Klingons dead, their globules of pink blood floating about. Cinematographer Hiro Narita captured long, frenzied takes in fluid camerawork, in particular during scenes where Spock investigates the conspiracy from the Enterprise. The outcome earned nearly $97 million at the box-office and cost only $27 million, justifying the continued cinematic adventures of the succeeding crew. The ending uses The Next Generation’s foreword as a reflector of the film’s theme: In the final Captain’s Log, Kirk says, “This is the final cruise of the Starship Enterprise under my command. This ship and her history will shortly become the care of another crew. To them and their posterity will we commit our future. They will continue the voyages we have begun, and journey to all the undiscovered countries, boldly going where no man—where no one—has gone before.”

Bittersweet, hopeful, dramatically complex, and always engaging, the very title of The Undiscovered Country selflessly points to the future. Star Trek, though often containing literary references and weighty themes, has for the most part left pronounced social commentaries or allegories on the wayside in favor of sci-fi escapism. But along with his concept for The Voyage Home, Nimoy spearheaded The Undiscovered Country’s ingenious reinvention of the series’ standard formula here. That the film is among the best acted and directed of all Star Trek films, and remains fully entertaining throughout its reflection on the past, its present-day self-exploration, and its consideration of the future, confirms its triumph. With this final farewell, the entire cast receives a sendoff that shows what their original series always had the potential to be, yet only occasionally achieved, by becoming a device through which we examine our own world via the exploration of other worlds in the stars.