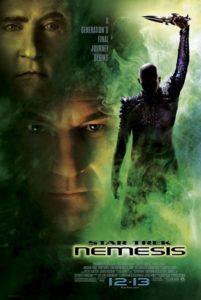 Almost everything about Star Trek: Nemesis, both what’s on the screen and what’s not, proves disappointing for longtime and casual Star Trek fans. Strange how, despite the imagination driving episode after episode of The Next Generation television show, this tenth film in the franchise feels compulsory and uninspired. After all, following after seven seasons and three movies, another feature film should be almost second nature. But perhaps that’s the problem. Both the studio and the cast seem to have approached this 2002 sequel with an air of obligation to the franchise’s commercial integrity—to keep going whether the story was right or not. The result remains untrue to The Next Generation characters and legacy, as though everyone involved had grown so tired of Star Trek that they resolved this sequel wouldn’t be a Star Trek feature at all.

Following Insurrection, The Next Generation’s third feature from 1998, which many considered a lackluster effort (this critic was not among them), Paramount Pictures took their time before releasing their next Star Trek film. Producer Rick Berman wasn’t sure what to do next. Because of these delays, Jonathan Frakes, director of First Contact and Insurrection, chose another directing project, the family adventure Clockstoppers, and wouldn’t be available to helm the next Star Trek feature. Berman resented that, and resolved to bring in fresh blood. He chose longtime editor Stuart Baird, whose features Executive Decision (1996) and U.S. Marshalls (1998) were modest hits. Berman hoped he could turn Star Trek into something more actionized and exciting, since the lack of cinematic action in Insurrection was the primary criticism about that film.

As for the script, Berman and the studio’s confidence was understandable. After all, the Oscar-nominated John Logan, whose Any Given Sunday and Gladiator scripts boosted his Hollywood clout, conceived the story with Berman. The pitch was simple. Why not repeat the formula that made The Wrath of Khan and First Contact such critical and financial sensations? Why not create a memorable villain, someone to provide a challenge both in the battlefield and in the mind? But what about the other characters—shouldn’t there be villains for the supporting crew? The story involved two doppelgangers, one for each of the series’ most popular characters, Picard (Patrick Stewart) and Data (Bent Spiner), to illustrate how The Next Generation is more than just its Captain. Stewart and Spiner had their own ideas, too. Stewart wanted to drive a buggy in the desert, while Spiner wanted Data to die since the actor could no longer maintain the android’s youthful, slim look. Logan and Berman conceded to their stars’ demands.

The film opens with the marriage of Cmdr. Riker (Jonathan Frakes) and Counselor Troi (Marina Sirtis), beginning on a note of obvious fan service, complete with an unreserved chumminess between characters. A few notable faces (Will Wheaton’s Wesley Crusher and Whoopi Goldberg’s Guinan) appear in dialogue-less cameos The stern Captain Picard (Patrick Stewart) cracks jokes. The emotionless android Data (Brent Spiner) sings a jazzy “Blue Skies”. None of their traditional personalities seem intact. Later in the film, Picard remarks, “This doesn’t feel right.” Could he mean the film’s tone? This isn’t an extroverted group, but a mixture of diverse characters who coalesce through their uniqueness, an exciting dynamic that’s largely absent within the establishing scenes. Not until about a quarter of the way through, when the plot begins to congeal, do the characters become themselves again.

After the wedding reception, the Enterprise stops at a desert planet near the Romulan Neutral Zone, the border separating their space from the Federation’s, in response to a signal from another android like Data. After the characters entertain themselves on Federation dune buggies, they find Data’s “long lost relative,” who we later learn is called B-4, a name that suggests that prior to its naming the creator was aware of what comes after. The double doesn’t have the wits of his older brother, however, nor a personality beyond that of a small child. Data transfers over his memory banks to bring B-4 up to speed, but the transfer doesn’t take. B-4 remains a numbskull, even by human standards. Meanwhile, the Romulans request the presence of the Enterprise at their home planet after a coup d’état on their senate, offering the possibility for a new, unprecedented peace between races.

When Picard and crew arrive to discuss peace, they meet the insurgent leader from Remus, the twin planet to Romulus, who has taken over. Shinzon (Tom Hardy, before he was a household name)—who is not Romulan but rather a clone of Picard himself, leftover from a scrapped plot to replace Picard and wage war on the Federation from the inside—says he wants peace. Nobody believes him, particularly after Picard discovers that Shinzon has a potent radiation weapon that could destroy an entire planet. Picard would like to think his genes would be diametrically opposed to such actions, as if genetic coding somehow controls life experience to make us who we are. Apparently, Data is the only one in the twenty-fourth century smart enough to realize that genetics do not make the Picard. The Picard makes the Picard. In creating a “Nemesis” for Picard analogous to Kirk’s adversary Khan, the filmmakers invented one rather than looking into the abundant source material of the show. Why not the omnipotent and dangerous pest Q? Why not Data’s reappearing evil brother Lore? Why not the Borg again? Instead, Picard’s contrived nemesis is a test tube twin driven by emotion, whereas Picard follows duty and honor and his humanist drives.

Even Riker has a nemesis in Shinzon’s viceroy, Vkruk (Ron Pearlman), who psychically guides Shinzon into Troi’s head for a mind-rape. Riker eventually defends his wife’s honor by pummeling Vkruk real good. And then there’s Data, who doesn’t exactly fight B-4, an entirely wasted character—that is, until our favorite android sacrifices himself in the end to save his captain. Will B-4’s memory banks eventually be overcome by Data’s transferred knowledge, thus returning our favorite android to normalcy? That was the plan. After production wrapped on Nemesis, Berman started development on a B-4-centric sequel, likened to The Search for Spock, called Star Trek: Beginning, before the studio shut down production due to poor box-office. To be sure, Nemesis bombed, making about $67 million worldwide on a $60 million budget. And so, The Next Generation ends on a note of an unfulfilled promise.

Inconsistencies in Star Trek lore—from electronic, non-Trek-like music to poor character development—may result from a director and writer unfamiliar with the gamut of shows and film. Baird took directing duties, despite being completely unfamiliar with Gene Roddenberry’s world or The Next Generation canon. His employment was no doubt based on his ability to direct an action scene, but that’s all. Baird’s choices remain the film’s greatest downfall. Consider scenes on the planet where the crew finds Data’s dumber counterpart: There’s desert-red color saturation that feels more appropriate for a Steven Soderbergh picture than a Star Trek film; and when our heroes are attacked by a local post-industrial culture, they make a space shuttle escape. But there’s not one mention of the Prime Directive, even though an alien race saw proof of their existence and advanced technologies. Trekkies no doubt threw their hands in the air in frustration over these irregularities—and this is just one sequence. All of Nemesis plays this way, completely oblivious to the established world of The Next Generation.

Several castmembers voiced their disdain for the production after their promotional responsibilities subsided. Entire characters feel nonexistent within the script, as many pointed out, such as Dr. Crusher (Gates McFadden). But that might stem from about 50-minutes of footage being removed, most of it character development otherwise absent from the final cut. Sirtis noted the poor timing of the film’s release, putting a niche-market product against holiday tentpole releases from franchises including Harry Potter, James Bond, and The Lord of the Rings. If the film had been released a few months after Hollywood’s holiday rush, audiences may have someday discovered the significance of B-4 humming “Blue Skies” in the finale. Alas, we can only wonder. Frakes also noted how he wasn’t offered the director’s chair, probably out of Berman’s distain over Clockstoppers. Frakes attributed the film’s incoherent tone to Baird’s admitted unfamiliarity with all things Star Trek. Considering his two Star Trek features are among the best in the franchise, audience can only speculate as to how Frakes would have improved Nemesis.

What a disappointment. Nemesis failed for what seems pure laziness on the part of the filmmakers and sheer disregard from the studio. Its unnecessary commercial failure might feel more tragic if the film itself were better; except, the resulting product proves so un-Trek-like that it’s impossible for even the most apologetic fan to find a creative success here. Non-Trekkie viewers might find the action scenes diverting, but due to the utter lack of character development throughout, Nemesis could never convert a general moviegoer into a Star Trek fan. In the end, devoted fans can only reflect on how disconcerting it is, since the film’s failure meant The Next Generation arc would end on the empty, unfulfilled note of an open-ended cliffhanger. Audiences would never to learn what Berman had planned for Data and B-4, nor the rest of the Enterprise crew. And so, The Next Generation’s legacy fades away in an unfitting whimper. It’s quite sad, really; these characters and their fans deserved better.