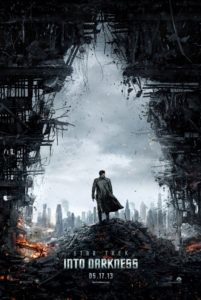 Rather than continue to “boldly go” by following the creative revitalization that was J.J. Abrams’ Star Trek, the sequel Star Trek Into Darkness resolves to pay homage to what came before. This much-anticipated blockbuster sequel contains several nods and references to the televised “Original Series” from the sixties and fewer plot innovations than one would hope for, but its lack of originality doesn’t mean this isn’t a splendidly good time for both Trekkies and latecomers to the franchise. Whether its degree of homage is too much depends largely on your devotion to the franchise’s history and your willingness to accept an alternative translation of a classic storyline from Trek canon. But perhaps this is already saying too much. Producer-director Abrams and studio Paramount Pictures have preserved (or at least attempted to preserve) an air of mystery about this sequel, going to great lengths to conceal details of the plot and certain characters, just as Abrams has done in the past with Cloverfield, Super 8, and of course the 2009 Star Trek relaunch. With due consideration of Abrams’ often successful campaigns of secrecy, consider yourself forewarned that the below review discusses the film in detail.

To recap: the events in Star Trek created an alternate reality in which all the events running through five TV shows and ten motion pictures were rebooted from square one, preserving the integrity of what came before, yet starting over in an alternate timeline. In Abrams’ first Trek film, heroes Kirk (Chris Pine) and Spock (Zachary Quinto) meet in Starfleet and share their first Enterprise mission together with their ever-loyal crew: crotchety Dr. McCoy (Karl Urban, brilliant), Spock’s significant other Uhura (Zoe Saldana), dutiful navigator Sulu (John Cho), wisecracking engineer Scotty (Simon Pegg), and whiz kid Chekov (Anton Yelchin). When the sequel opens, Kirk disregards Starfleet’s Prime Directive and interferes with a budding civilization in order to save Spock. As a penalty, his command of the Enterprise is given back to his mentor Admiral Pike (Bruce Greenwood).

At the same time, Commander John Harrison (Benedict Cumberbatch), a rogue Starfleet officer, attacks a Starfleet records building in London. When the Powers That Be meet to discuss their plan to capture Harrison, who is now branded a terrorist, he attacks Starfleet HQ in San Francisco. This provokes embittered Admiral Marcus (Peter Weller) to send Kirk after Harrison on a conspicuous search-and-destroy mission to Harrison’s hideout on the Klingon homeworld, Kronos. For much of the film, an uncertain course has been plotted, as the story wonderfully uses the alternate reality device to play with our expectations and our understanding of these beloved characters. In other words, none of the characters act the way you would expect them to. In some ways, that’s exciting for the viewer—to not get what you’re expecting. In other ways, it feels like a betrayal of the Star Trek legacy. 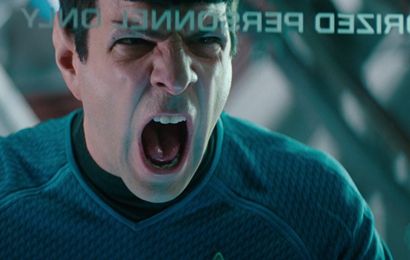 For example, Kirk isn’t as confident here, while Spock has more emotion to show (and conceal). As the story progresses, Kirk captures Harrison and discovers the terrorist’s true identity: Khan Noonien Singh, a former war criminal who, along with his band of 72 genetically enhanced super-soldiers, was cryogenically frozen for hundreds of years because they were too deadly. In Star Trek lore, Khan has long been Kirk’s arch-nemesis—the Joker to Kirk’s Batman (and indeed, the filmmakers used The Dark Knight as inspiration for Star Trek Into Darkness in more than one scene). Kirk is a powerful hero made powerless by a foe who cannot be bested through traditional means. In the role, originated by Ricardo Montalban in the Star Trek episode “Space Seed” and reprised in Star Trek II: The Wrath of Khan (1982), Cumberbatch is sharp and menacing. For a moment—just a moment—we even feel Cumberbatch’s version might be sympathetic, or at least supplied with ample reasons to launch an attack on Starfleet.

Alas, Khan later becomes monstrous, since the filmmakers could not resist the opportunity to show Kirk and Khan go head-to-head once more. Even so, the filmmakers employ Khan in novel ways, using him to expose a larger, more thought-provoking conspiracy, and, therein social commentary. Had this film’s Khan proved less predictable, the climactic final scenes of Star Trek Into Darkness would have been far more satisfying. It’s mildly disappointing that Abrams’ penchant for extreme secrecy finally goes where every Trekkie has gone before, namely to The Wrath of Khan. His sequel’s twists and turns shift from being filled with the possibility of being downright unsurprising in the finale. The Wrath of Khan has been considered by many to be the series’ best film, an arguable point to be sure (First Contact is my personal favorite), so perhaps Abrams hoped to replicate its popularity.

And though screenwriters Roberto Orci, Alex Kurtzman, and Damon Lindelof haven’t reproduced The Wrath of Khan—not exactly—they’ve reorganized its most memorable scenes to fit the schema of this alternate universe, often just flip-flopping the roles played by Kirk and Spock. For example, this time it’s Kirk who finds himself saving the Enterprise crew by exposing himself to deadly levels of radiation, while Spock sits on the other side of the glass and mourns his friend’s death, inciting Spock to howl “Khaaaaaaan!” in that famous way originally growled by William Shatner’s Kirk. Other nods and “Easter eggs” are less obvious and derivative, while some are sheer fun. For example, the crucial role of a sole Tribble is hilarious, if superfluous, and the appearance of Leonard Nimoy a pleasure. Then again, fans may balk at the odd physical appearance of Klingons. 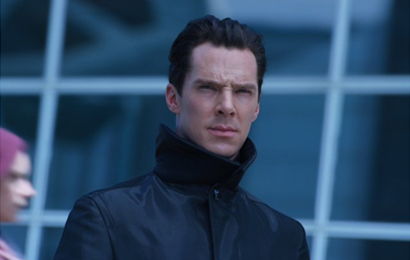 Despite my own nitpicks and reservations about the film relying too heavily on The Wrath of Khan for its story, the delivery is so well-crafted, so exhilarating, that one feels obliged to commend the director for maintaining our involvement in a story we’ve been told before. After all, Abrams made Super 8, a film combining various Steven Spielberg and John Carpenter tropes into one fantastic whole. Abrams has delivered yet another polished production gleaming with lens flares, bravado special FX sequences, and an actionized pace that never slows—all set to Michael Giacchino’s epic score. A number of sequences are nothing short of awe-inspiring, including one early on where the Enterprise emerges from underwater, while in the backdrop, a volcano erupts on a planet of blood-red vegetation. The sights and spectacles are gorgeously conceived, while the human (and other species) element hasn’t been sacrificed. The characters’ motivations and arcs are thoughtful and emotional, particularly those of the otherwise detached Spock, giving the film’s prevalent action sufficient meaning to create a sense of high stakes from scene to scene.

In terms of pure high-energy entertainment, this popcorn-munching sequel feels less like a typical Star Trek film and more like a rousing summer actioner, a quality that’s certainly a change from the character-based films in the franchise’s past. Still, Star Trek Into Darkness doesn’t have a dull moment, but it also doesn’t put enough distance between the original Star Trek films and its own alternate universe. And while its closeness to The Wrath of Khan can be viewed as inspired homage or simply fan pandering, Abrams gives audiences enough reason to cheer for his practiced brand of kinetic escapism—in far greater portions than most films of this kind could ever hope to supply. My criticisms about the story can (and should) be forgiven, allowing for the film’s exceedingly effective components to come together. Instead of splitting hairs over how this or that plot point relates to another film, consider how well the pitch-perfect ensemble carries us through the action, how every point of comic relief makes us laugh, how every stunt and effect leaves us with an audible “Wow” under our breath, and finally, how the plot, though familiar, still manages to transport us into the Star Trek universe. Though not what every Trekkie will want but undeniably thrilling on its own terms, Star Trek Into Darkness is a solid follow-up to 2009’s breakthrough and will leave audiences wanting more.