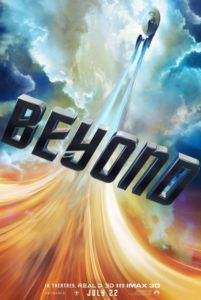 Star Trek has always been better on the small screen, a platform that allows its characters to become what Gene Roddenberry originally intended: Explorers on an extended mission in outer space, like Horatio Hornblower sailing the open seas. Over the course of several episodes, the relationships between these characters grow and become a comfortable working dynamic. The Star Trek films, while often entertaining, rarely provide more than science-fiction escapism and often rely on epic-sized, blockbuster-worthy scenarios with no time for characters to breathe. Perhaps this is why each television series proved the whole was greater than the sum of its parts, and why few of the films can measure up to the shows in their entirety. Such is not the case with Star Trek Beyond, whose 2016 release celebrates the 50th anniversary of the first airing of Star Trek in 1966. Appropriately, the film feels like a top-notch episode from the series—in all the right ways.

Before getting to what’s onscreen, which will be discussed in detail here, consider the film off-screen. There’s much to savor and much to mourn about Star Trek Beyond. Fresh in our minds is the recent, all-too-soon death of Anton Yelchin, the talented actor who played “Russian whiz kid” Chekov in J.J. Abrams alternate Star Trek universe. Next comes Leonard Nimoy, the original Spock and sole carry-over from the first Enterprise crew, who died in 2015 after appearing in Abrams’ Star Trek (2009) and Star Trek Into Darkness (2013). Worth revelry, however, are writers Simon Pegg and Doug Jung—the former stars as chief engineer Scotty and the latter briefly appears as the partner of helmsman Sulu (John Cho), now the first openly gay Star Trek character. A longtime Star Trek fanboy and frequent genre writer (see Shaun of the Dead, Hot Fuzz, etc.), Pegg shows his appreciation for the original series through his writing, and working alongside Jung, delivers a thematically tight script. 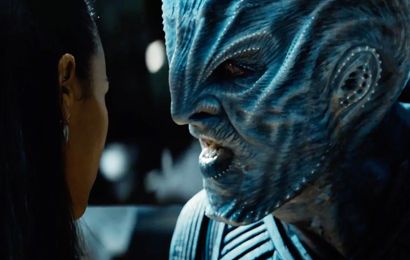 Pegg and Jung’s screen story opens as the Enterprise completes just over half of her “five-year mission” in space, launched at the end of Star Trek Into Darkness. Docking at Starbase Yorktown for a much-needed respite, Kirk (Chris Pine) grows tired of the captain’s chair, largely out of space fatigue and a feeling of isolation. Elsewhere, Spock (Zachary Quinto), having learned of the death of Ambassador Spock (Nimoy), believes he should support his diminished Vulcan race. Both silently consider leaving the Enterprise, but their departures are delayed when the pilot (Lydia Wilson) of a lone escape pod arrives at the Yorktown starbase and asks for help rescuing her crew, which is stranded on a planet within a nearby nebula. Kirk agrees to lead the mission, only to have the Enterprise ambushed and torn apart by a swarm of highly organized, bee-like ships. Their leader is Krall (Idris Elba), a lizard-looking figure bent on unleashing a dangerous bio-weapon on Yorktown.

By the time what’s left of the Enterprise crash-lands on the planet’s surface, many of the crew died, ejected in escape pods, or became separated from the others. The mission is now to regroup and engage Krall, who has a base nearby, and who has stranded dozens of other ships and crews on the planet before. As the Enterprise crew is separated from each other in various pairings, the film affords the actors time to explore their roles in touching and funny moments, reminding us why we love these characters. Cantankerous and humanist, Dr. McCoy (Karl Urban, excellent) must treat an injured Spock, who insists on staying mobile to rescue Uhura (Zoe Saldana), the ship’s linguistics expert with whom he’s in a rocky relationship. Scotty finds himself an ally in Jaylah (Sofia Boutella), a warrior who has been stranded by Krall and has made a home in the crashed USS Franklin, a thought-lost Starfleet vessel from 100 years before. Meanwhile, Kirk and Checkov try to get the ship’s scanners working and find the others.

As the confrontation with Krall looms, viewers can easily lose themselves in Star Trek Beyond’s vast imagination, which is something we haven’t been able to say about this franchise since the late 1990s. The film’s sci-fi gizmos and advancements remain intriguing enough on their own. Our first inkling that the film has real vision occurs at Starbase Yorktown. Unlike the orbiting, skeletal space stations of Deep Space Nine, the starbase here recalls the titular station in Elysium, being a series of ring-like platforms with their own specific gravity, each harboring skyscrapers and bodies of water. Later, we’re equally fascinated by a smoke-emitting weapon whose plumes harden into a trap (think the amber in Fringe), or the holographic projections used during combat (think Total Recall). More original is the flora on Krall’s planet, including floating spores that resemble jellyfish and intense jagged rock formations—a far cry from the painted sets of the original television series. 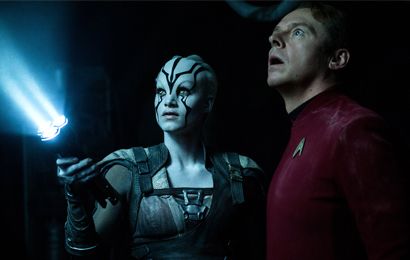 If there’s any major fault of Star Trek Beyond, it lies in director Justin Lin, helmer of several Fast & Furious titles, and an obvious choice by Paramount Pictures to actionize their film. Although Abrams (off filming Star Wars Episode VII: The Force Awakens) still serves as producer, and Lin mostly upholds the look of Abrams’ previous two entries, the new director’s presence does not go unnoticed. His team of four (!) editors delivers two or three sequences that are difficult to follow, leaving close-quarters, hand-to-hand combat scenes feeling rushed and somewhat incoherent. Elsewhere, Lin’s choice of cinematographer, Stephen F. Windon (another Fast & Furious graduate), delivers a darker palette than Abrams’ work. Occasionally, such as scenes in the downed Enterprise saucer, Windon’s light is so dim that it’s impossible to tell what’s going on. No doubt Abrams would have corrected these technical issues, whereas a pristine formal presentation hasn’t been a requirement of Lin’s earlier career.

Nonetheless, the quality of Star Trek Beyond’s story and themes gloss over any quibbles about its few technical distractions. Most fascinating is Pegg and Jung’s thoughtful examination of how an extended voyage into deep space would affect a person like Kirk, his crew, and even the Enterprise itself (the ship is falling apart before they arrive at Yorktown). It’s even more telling when the film reveals Krall to be the human captain of the Franklin; Krall has figured out how to extend his life, leaving him mutated. But long before that, his travels across the galaxy had left him with a case of space madness, fuelled by an all-consuming resentment that the Federation had sent him out into the stars, lost him, and never found him. What initially seems like a one-note villain bent on destruction for destruction’s sake transforms into a damaged man—and one that reflects Kirk’s own apprehensions toward future missions.

Moviegoers more interested in action than sci-fi theory have plenty to enjoy, with grounded combat, spatial dogfights, and an exciting, gravity-defying finale. Michael Giacchino’s excellent score keeps things moving along, as do a couple of twentieth-century tunes that play vital roles in the story. Throughout, the film allows the ensemble to comfortably inhabit their characters, as opposed to Star Trek Into Darkness, where it seemed like the script required everyone to behave against type. But those who describe Star Trek Beyond as “like a big-budget episode” of the show are paying the film more of a compliment than they realize. This is a film that wonderfully blends what devoted fans enjoy about the show and what moviegoing audiences look for in a summer blockbuster. Roddenberry’s vision is reflected upon and implemented with love and care, and the resulting film is not only one of the most entertaining and fun entries in the Star Trek franchise, but alongside Star Trek: Insurrection, it remains very true to what Kirk humorously describes as the “episodic” nature of space exploration.