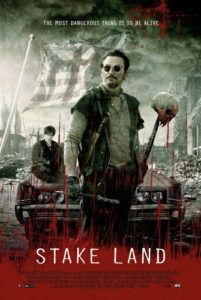 The past several years have yielded endless vampire, zombie, and post-apocalyptic movies, often featuring a heroic, tough-as-nails badass who saves the day. Stake Land is such a mix-n-match flick, inspired most obviously by The Road and George A. Romero’s many zombie films, except here with voracious vampires as the resident monsters. Created by Mulberry Street director Jim Mickle and his co-writer Nick Damici, the film borrows heavy Christian and Western symbolism for a road movie about survivors of a vampire epidemic. With sure-handed direction driving a moody tone, the steadily paced and character-driven story proves to be more than your average monster fare. However, it will test your overexposure to these genres.

In the first scenes, a hardened vampire hunter, known only as Mister (Damici), rescues orphaned teen Martin (Connor Paolo) from becoming bloodsucker chow, and together they form a crude father-son bond as Mister teaches Martin the art of vamp killing. Bound for New Eden—which, depending on who you talk to, offers either mythic refuge or hordes of cannibals that have overrun the city—our heroes travel by convertible toward either salvation or death. Along desolate roads lined with burned corpses and religious end-of-days signage, they stop at human settlements straight out of Western landscapes, complete with brothels and saloons, get their fill, and then continue down the road.

Narrated by Martin, the story develops as they make additions to their small family: a nun they save from gang rape (an unrecognizable Kelly McGillis), the increasingly pregnant Belle (Danielle Harris), and a Marine (Sean Nelson). But along the way, their group begins to diminish after a few vamp encounters and trouble with the Brotherhood, a band of murderous Christian extremists led by hillbilly overlord Jebedia (Michael Cerveris).

While Mickle and Damici preserve Western genre archetypes in the story’s push toward New Eden, the vampires serve as a faceless and uninteresting threat. With pale skin and black circles around their eyes, these undead creatures run about on all fours growling and have more in common with Romero-variety zombies than any vampire you’ve seen. We never find out what started the vamp outbreak—if it was a virus or mutant bats or a Dracula-type figure behind it. And though respite from Twilight’s all-too-popular romantic take on vampires is welcome, some personality beyond animalistic bloodlust would have rendered the creatures more than mindless goons. The co-writer and director have confirmed that their screenplay was inspired by Westerns, with vampires taking the place of Native Americans, but what does their interpretation say about their view of Native Americans?

More than vampire origins go unexplained. For example, where do the survivors find gas to drive around the way they do? When, if ever, do the survivors eat? Such practical questions usually have no place in a post-apocalyptic vampire movie, but even Cormac McCarthy addressed the basics. Spare backdrops are matched by infrequent dialogue pointedly deficient of explication; yet that’s part of the film’s appeal—its barren quality evokes the manner of the setting. Damici’s gruff-faced anti-hero fits perfectly within his surroundings, his character just a few shades less fabled than Snake Plissken. Gossip Girl’s Paolo, on the other hand, looks far too fresh-faced and well-groomed to be a survivor of a vampire plague, and occasionally his weighty narration proves unintentionally funny.

Quibbles aside, fans of vampire or zombie movies will enjoy how familiar the material feels. Mickle displays impressive restraint when it comes to action, centering his story around solid characters on a clear mission. And it’s even better if you watch this movie with the mindset that Mickle and Damici intended to make a gristly prequel to Daybreakers, a more inspired horror tale about a world overrun by vampires. Acquired by IFC Midnight from boutique horror label Dark Sky Films, Stake Land earns a limited theatrical release and wide debut in the video-on-demand market. At home is where this material will work best. Though involving and certainly watchable, it never reaches beyond just serviceable and blends far too well with the current white noise of similarly-themed output.