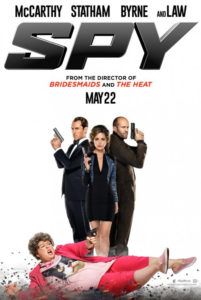 One of the funniest moments in Spy, another collaboration between writer-director Paul Feig and star Melissa McCarthy, involves the actress killing a Eurotrash goon. She kicks him in his boy parts and knocks him off a balcony. He falls a few stories down and impales himself on a metal rod. Looking over in awe and horror at what she’s done, McCarthy’s character vomits, and it lands all over her victim. Then she drops a knife, and it lands in the man’s chest. And that’s about as clever and subtle as Spy gets. This overlong summer action-comedy has quite a few laughs, however, thanks in part to some inspired casting and hilarious supporting roles. Even though the R-rated movie overstays its welcome by about a half-hour, preventing itself from becoming a sharp, breezy lark, it’s a James Bond parody worth a casual viewing.

Though she’s arguably past the point of overstaying her welcome after movies such as Identity Thief, The Heat, and Tammy, McCarthy plays her most effective role since Bridesmaids as Susan Cooper, a deskbound agent feeding information into the earpiece of her Bond-esque counterpart, Bradley Fine (Jude Law). She’s not the foul-mouthed, abrasive slob that she played in those other titles, although she does occupy that persona later on. Cooper is reserved and smart. From her computer station in the rat- and bat-infested basement of the CIA, she watches via satellite and through Fine’s eye camera, instructing him through deadly corridors and super-villainy hideouts. She also happens to be in love with Fine, which he knowingly exploits in flirtatious “I couldn’t do it without you” comments. Fine proves to be either cruel or completely witless when he gives Cooper a piece of jewelry: a necklace with an angry cupcake made of plastic.

When a snooty arms dealer named Rayna (Rose Byrne) removes Fine from the mission for good and announces that she has the identities of all active CIA agents, Cooper demands a field assignment to track Rayna’s upcoming nuclear bomb sale somewhere in Europe. Because of her anonymity, Cooper is granted the undercover mission and a frumpy cover story. Now in Cooper’s ear is fellow desk-jockey Nancy (Miranda Hart, quite funny), a nervous type, while she’s also assisted by an indiscriminately horny Italian agent named Aldo (Peter Serafinowicz). On the sidelines, Jason Statham appears as a former CIA agent who wants revenge on Rayna, and his macho aggression makes him hysterically overconfident, especially when he goes down a list of impossibly elaborate punishments he’s endured in the line of duty.

As Cooper’s cover is blown again and again, she must change disguises each time. She eventually poses as Rayna’s bodyguard, and here audiences must endure that crude and rude version of McCarthy that has been so overdone of late. Though there are plenty of jokes about McCarthy’s weight, it’s refreshing to see jokes about Byrne’s bony figure as well. It’s pretty funny (for a while, anyway) watching Cooper and Rayna sling insults at one another, but the shtick wears thin, and eventually, we’re wondering how much more story there could be. By the time Nancy joins the mission in the field, the over-the-top aspects of Spy have been driven to their limits. During this middle portion, Fieg carries the irreverence too far, including an unnecessary cameo by rapper 50 Cent and a number of protracted action sequences. The plot also becomes needlessly complicated, involving several twists and a deadly showdown that includes Bobby Cannavale’s duplicitous villain. The finale, where Cooper hangs off a helicopter in pursuit of the bad guy, is nothing short of uninspired.

Just a few visual gags require some attention, such as shots back to the CIA intel basement that usually hide a rat somewhere in the frame—be it on Nancy’s shoulder or scurrying across a desk. But Feig goes back-and-forth for the full two-hour runtime, trying to decide what kind of comedy he’s making, a true action-comedy, or a broad spoof. The 007-esque opening suggests the latter, but curious scenes of bonding between Rayna and Cooper want to be something more. Nevertheless, Feig’s writing is too heavy-handed to straddle that line the way that Kingsman: The Secret Service did, and he’s too concerned with turning McCarthy’s role into a lovable character to deliver something as lampoonist as OSS 117: Cairo, Nest of Spies (2006) or OSS 117: Lost in Rio (2010). Though the entire supporting cast and McCarthy are likable throughout most of Spy, the proceedings carry on for far too long, spoiling what could have been a good thing.