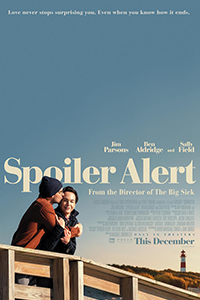 Spoiler Alert is a distractingly vague title. Based on television journalist Michael Ausiello’s 2017 memoir about his relationship with photographer Kit Cowan, the movie abbreviates the book’s name from Spoiler Alert: The Hero Dies. On the book’s cover, “The Hero Dies” took up most of the visual real estate, and “Spoiler Alert” was de-emphasized in the upper-left corner. But the movie’s reduced title doesn’t make much sense without the second half. What exactly is getting spoiled if “The Hero Dies” isn’t present? The current form doesn’t supply the viewer with any foreknowledge; it warns only of the ensuing story, not a potentially unwanted plot detail. Doubtlessly, the marketing department at Focus Features resolved that implying a death in the title would repel potential moviegoers, so they removed the source material’s titular spoiler—a pointless move since the first scene features Jim Parsons as Ausiello telling the viewer that his husband (Ben Aldridge) will die. Regardless of what the movie tells us and when, Spoiler Alert is an endearing romance in the first half and an effective tearjerker in the second, and both aspects work as intended.

The screenplay by longtime actor David Marshall Grant and journalist-author Dan Savage does what it does very well. The proceedings follow a recognizable trajectory, but it’s handled with such thoroughly developed characters that its formulaic nature barely registers during the 112-minute runtime. Michael works for TV Guide, writing about mainstream television (think Felicity) in the early 2000s. Shy and self-conscious, he has abandonment and body-image issues. Then he meets Kit, whose series of random hookups and short relationships suggest he’s not ready for anything long-term. There’s a certain opposites-attract quality when they meet, yet they have a convincing relationship, which director Michael Showalter patiently establishes. Initially, their biggest challenge entails Michael’s Smurf obsession (he has as much Smurf memorabilia as I have Blu-rays—a lot). Also, for the first time, Kit feels guilty about seeing other people, suggesting he wants to commit to Michael. Refreshingly, the movie doesn’t rush through establishing their dynamic with a falling-in-love montage that glosses over why they love each other.

Their intimate conversations, Michael’s initial reluctance about sex, and the apparent chemistry between Parsons and Aldridge build a lasting relationship in the movie’s first half. Although Parsons doesn’t have the most charismatic screen presence, he’s wholly present and convincing in his scenes opposite the more authentic Aldridge. The actors fully inhabit their roles, which start sweetly and grow more complex, as relationships tend to do. Particularly affecting are scenes where Kit finally comes out to his sympathetic parents, blithely played by Sally Field and Bill Irwin. But after a decade or more passes, Michael and Kit must attend couples therapy for Michael’s jealousy and drinking, Kit’s pot usage and relationship with a coworker, and their being in “very different worlds right now.” This lays the groundwork for what comes next: Kit learns he has cancer, and the two set aside their relationship problems to deal with his treatment.

Showalter is no stranger to illness-inflected romances. He directed The Big Sick in 2017, albeit with superior results. But several post-modern touches in Spoiler Alert don’t work, such as Michael’s narration. Elsewhere, Michael’s fixation on TV means he processes difficult moments in cutaway scenes, imagining himself in an ‘80s sitcom akin to Family Ties. The “former fat kid” has fond, if occasionally tragic, memories of growing up fatherless and watching daytime soap operas alongside his now-gone mother (from cancer, making Kit’s disease even more difficult for Michael). Unfortunately, these scene-breaking fantasy moments never quite work and disrupt the unfolding drama, most egregiously in the climactic moment—which is an emotionally manipulative scene that, admittedly, I sobbed through. On the plus side, Michael has an affinity for Christmas, so the movie features several holiday scenes around the tree, brimming with holiday cheer. It’s not worth debating whether Spoiler Alert is officially a Christmas movie, but seeing it during the season certainly helped its warmth and tenderness.

Is the material maudlin and predictable? Yes, Spoiler Alert is just what it seems—a queer rom-com and tearjerker that draws from a wellspring of similar movies. But it’s so well executed by Showalter into an often funny, winningly performed, and genuinely moving account of Ausiello’s story. Best of all, after the emotional devastation of Kit’s inevitable death, the filmmakers haven’t tried to find meaning through some grandiose life lesson that makes everything okay in sentimental terms. Instead, the movie draws its emotional power from acknowledging that relationships have ups and downs, and though they sometimes end, they’re worth having for what they teach us and the love they bring. As a result, there’s a powerful sense that Michael will move on yet will always cherish his time with Kit. And what’s more, he will look back not through the framework of a television sitcom but as a memorable episode from his life.