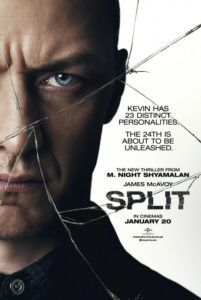 Nearly two decades ago, M. Night Shyamalan arrived with near-universal praise as a virtuoso filmmaker for the new century. After shocking audiences with a twist ending on The Sixth Sense, he followed his 1999 breakthrough with Unbreakable (2000) and Signs (2002), stylishly self-conscious and entertaining films each with considerable human depth. He soon devolved into preposterous, pretentious fare like The Village (2004) and Lady in the Water (2006), and somehow convinced backers that The Happening (2008)—a thriller about Mark Wahlberg running from air—was a visually compelling idea. Shyamalan quickly lost his touch, but The Last Airbender (2010), a single entry into “The Night Chronicles” with Devil (2010), and After Earth (2013) were still to come. Now the writer-director’s downward turn is best forgotten, if for no other reason than Split, his latest, proves to be his best work in a long, long time.

A kidnapping thriller that follows several conventions, and also shirks them, Shyamalan’s Split echoes Alfred Hitchcock’s Psycho and Brian De Palma’s Sisters; in other ways—certainly by the last, enthusiastic frame—it’s pure Shyamalan. At once overwrought and carefully structured, sort of funny yet also terrifying, and laden with a few twists along the way, the film does what the filmmaker should have been doing for the last fifteen years: plays with his favorite genres in a fun way. The basic plot involves the abduction of three teenagers, the socialites Claire (Haley Lu Richardson) and Marcia (Jessica Sula), and an unwelcomed misfit Casey (Anya Taylor-Joy, from The Witch). They’re locked in a subterranean room by Kevin (James McAvoy), a disturbed man with several personalities trapped inside of his shaved head.

Stricken with dissociative identity disorder, Kevin has twenty-three separate personalities or “alters” rattling around in his brain, some from either sex, some quite pleasant, some outright monsters. For instance, there’s Dennis, a germophobe with a penchant for watching underage girls. Or there’s the prim and proper Patricia, a British-accented lady. Most enjoyable is Hedwig, a 9-year-old boy with a lisp who delivers a boisterous dance to Kanye West. Elsewhere, a sympathetic psychologist (Betty Buckley, terrific) treats Kevin’s condition, believing that each of his alters has its own distinct physiology to which the host body will physically change to suit each one. But several of Kevin’s personalities have teamed up and named themselves “the horde” in anticipation of a twenty-fourth personality, a monstrous entity called “the beast”—a frightening notion for the kidnapped teens who are prepared as sacrifices to the beast.

Even writing it out, the plot sounds silly. Yet McAvoy’s tour de force performance demonstrates his enthusiasm for making each alter a distinct and committed portrayal, despite Shyamalan’s script reducing each personality to a cliché. McAvoy seems to be having a blast playing his multi-faceted psycho, and his energy proves contagious, involving the viewer in the otherwise outlandish proceedings. Nevertheless, the majority of his twenty-three alters have been buried deep by the five or six personalities in control. But those we do see are performed with the same manic quality McAvoy brought to his deranged role in Danny Boyle’s Trance (2013). Also excellent is Taylor-Joy, whose victim remains defined by several haunting flashbacks that build toward a present-day relevance in typical Shyamalan fashion.

Above all, Split remains compellingly watchable from start to finish. This isn’t another of the writer-director’s understated mood pieces that purveyed the early part of the last decade, nor does it scream for desperate approval as his recent found-footage yarn The Visit did. To put it simply, Shyamalan uses his strengths and minimizes his weaknesses. He’s always been superb at conceiving innovative plot concepts; however, he often explores those concepts to an unsatisfying or merely ridiculous end. The notion of plants fighting back against humanity by creating an airborne disease remains compelling, but watching people run through a field from the wind is a laughable way to explore said notion on film. For much of Split, the director confines his plot to a tense situation about a victim navigating the fragile mind of her captor, while the psychologist on the outside lends insight into the status of the film’s monster. Only near the end does Shyamalan rely on some distracting CGI and supernatural elements that take a relatively contained thriller and blow them up into a much larger, but also lesser story.

Even so, Split delivers a tense and entertaining B-movie experience that seems to revel in its performers and the novelty of its plot, albeit in fun and not-so-self-serious ways. It would make a fine double-feature alongside last year’s 10 Cloverfield Lane, in that both involve kidnapping victims on their tiptoes around their unstable host; both could be taken as-is, or could be considered a part of a franchise; both contain a third act with unexpected supernatural elements; and both feature an incredible performance by the resident kidnapper. Shot in Shyamalan’s hometown of Philadelphia by Michael Gioulakis, the cinematographer who gave It Follows those timeless textures, Split looks good and has a lot of atmosphere. But if another actor had delivered a less committed performance than McAvoy’s, the entire film may have fallen apart.