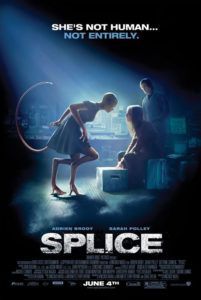 Vincenzo Natali’s Splice attempts to blend modern science and human psychology in a low-budget but smartly made genre film. In concept alone, not to mention the first exciting half-hour, the film promises greatness before failing to live up to those promises with a second half that feels emotionally disengaged and a finale that’s rushed. Taking a cue from Frankenstein, the film asks a lot of important questions about what “human” means, about the controversy of using human material in scientific experimentation, and about the human element in objective science. Except, these questions are never really engaged in any meaningful way, leaving the film to be merely a monster movie.

Adrien Brody plays a geneticist named Clive, and Sarah Polley plays Elsa, his lover and lab partner. Could it be just a coincidence that Brody’s character shares a name with Colin Clive, the actor who played Henry Frankenstein in the 1931 film, or that Polley shares a name with Elsa Lancaster, the actress who played the Bride of Frankenstein in the 1935 film? Decidedly not. They work for a corporation that wants a protein to help cure diseases in cattle, so they’ve been using animal genes to make a hybrid creature that produces the protein, a fleshy mass that looks something like a game pod from eXistenZ. The scientists want to do the same thing to benefit humans, but the company is wary of using human gene splicing. With a mad glint in her eye, Elsa underhandedly places human DNA in their new experiment and sets it to grow. Clive, aware of this at the last moment, concedes to go along with her plan, keeping their progress secret from the company.

When their creation is born, the scientists witness a new form of life with animal and human components in its genetic structure. It grows quickly, with minutes existing for days, and soon it appears something like a human child. This modern day Frankenstein’s Monster is named Dren, and she’s played by Abigail Chu in adolescence, and then Delphine Chaneac in young adulthood. The creature has wide eyes, a tail with a stinger on the end, gills for breathing underwater, retractable wings, and (eventually) the humanoid appearance of a young woman, though without hair. With all of those physical characteristics, it’s impossible to keep track of what she’s capable of. Resolving how smart she is, or what her desires are, that’s another matter entirely. It’s also a concern that the screenwriters—Natali, Antoinette Terry Bryant and Douglas Taylor—forgot to address, or at least didn’t deal with in enough detail. And not giving Dren an obvious drive is one of the unfortunate failings of the film.

While it’s unfair to compare the film, or any film, to Mary Shelley’s Frankenstein, the connection is undeniable, so we must. In the novel, Dr. Frankenstein’s obsessions and motivations for creating the monster were clear, as were the Monster’s desires for normality, companionship, and ultimately shame upon the realization of its place in the world. With Dren, none of the creature’s desires are evident. Her emotions whirl out of control, making her unpredictable. She appears, at times, to be toying with her parents (although that is a very liberal use of the word “parents” given the events in the story), and she lashes out in fits of anger or jealousy. But there’s no telling what Dren thinks or feels beyond a sense of captivity, or a desire to procreate. Is that enough? Not for a fully developed character.

But then Clive and Elsa feel underdeveloped as well, as though the writers attempted to construct three-dimensional characters but became confused when conceiving the last dimension. Clive goes along with Elsa’s deranged passion for Dren, questioning her decisions but always backing them. We stop understanding his character, however, after he engages in intercourse with Dren. Meanwhile, Elsa, who has a past festering with mentally unstable mommy issues, looks to Dren as a makeshift child, but a child she can control without risk in the safety of a controlled lab. So why does Elsa want to remove Dren from the lab and carelessly disregard the scientific process at every turn? The only reason seems to be because that’s what the horror movie needs her to do. In this case, one-note characters might’ve served the story better, allowing the audience to at least enjoy the basic monster movie aspects of the plot.

Despite the script, that devolves the scenario’s potential as it progresses onscreen, the film boasts some impressive special effects to render Dren and her more fantastical physical characteristics. The relatively small $26 million budget was extended far, considering every shot with Dren requires CGI to complete. Indeed, the film looks good in terms of effects and direction. As evident in Natali’s 1998 film Cube, the filmmaker specializes in probing small scale, high-concept situations by extending a minor budget. But with Splice, though his film completely avoids a low-budget appearance, his familiar story and poor character development fail to explore the subject in any way that will stay with the audience past the end credits.