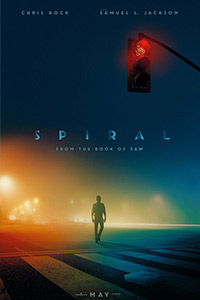 The Saw franchise dominated the early 2000s horror scene where abrasive, awful characters receive their comeuppance in particularly gruesome ways. Watching these movies often results in an empty experience because the filmmakers leave the viewer with no one to root for, and the movies seem to delight in giving bad people a grisly end. Studios have tried recently to reboot 2000s-era franchises with sympathetic characters. This year’s Wrong Turn completely flipped the 2003 killer-mutant-cannibal-hillbilly original on its head. Spiral: From the Book of Saw isn’t so inventive, but it tries new things in a franchise that’s been on autopilot since its first sequel. Some of these changes work, some of them don’t. Fans of the franchise may be interested in watching it attempt something different, even if it falls back on the same old formula that defined the previous eight entries. Admittedly, the series has never interested me, and Spiral didn’t turn me into a convert.

Spiral originated with an idea from Chris Rock, strangely enough, who had a chance meeting with a Lionsgate executive at a mutual friend’s wedding and casually shared some ideas about how to improve their failing Saw franchise. Some time later, Rock met with Lionsgate in a more official capacity, wrote a detailed treatment, and took on executive producing duties on the tired horror franchise—one of the most profitable in genre history. But Lionsgate needed something drastic to reignite their series, which suffers from creative fatigue and diminishing returns. It already marked the “final chapter” in 2010 with Saw 3D, but that gimmick wasn’t enough. Seven years later, the studio sought to revitalize the series with Jigsaw by the Spierig brothers, but no one was interested. Screenwriters can only revive Jigsaw, establish his disciples, or reinvent him with copycats so many times. After a while, it becomes a lifeless exercise in mining intellectual property when it’s been exhausted.

Rock’s take is somewhat different, almost enough so to justify itself. Foremost, Spiral is notable for its cast. Saw movies have been mostly devoid of star power since the initial two or three entries. One of the highest-paid stand-up comedians, Rock changes his image to play Det. Zeke Banks, the resident hero cop; and one of Hollywood’s most bankable stars, Samuel L. Jackson, plays his father. Together they elevate the proceedings, which place them in a serial killer yarn like Se7en (1995)—full of sweaty atmosphere and an oranged-out color palette to reflect the setting’s heatwave. The story unfolds from Banks’ perspective, whereas the average Saw movie usually follows a series of victims trying to escape from Jigsaw’s elaborate traps. Banks receives cryptic notes and a gory trail of clues, but he’s no closer to catching the killer. He’s even saddled with a new rookie partner (Max Minghella) after one of those classic cop movie “I’m a loner and don’t need a partner” shouting matches with his captain (Marisol Nichols). So while Spiral is a rethread of Saw, it’s through the worn-out fabric of a 1990s-brand detective thriller. 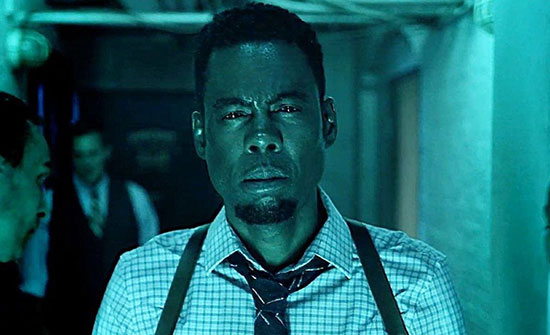 In other ways, Spiral attempts to recapture some of the franchise’s former glory. Darren Lynn Bousman, who directed the second, third, and fourth entries, returns to the helm, carting along his bag of sensory jolts, color-saturated sets, and fast-motion flashes. Bousman’s aesthetic looks as though he’d prefer to be making Goth music videos. Every scene takes place in either pitch blackness or behind an oppressive color saturation (Steven Soderbergh’s work on 2000’s Traffic looks subtle by comparison). Bousman’s style has never been an attractive one, but today it rings of the 2000s, and that may be why his output in recent years has felt so underwhelming and outdated. As a result, Spiral looks and plays like a Saw sequel from, say, 2008. But, of course, that may very well be the intention—to reboot the franchise by paying homage to its roots.

If there’s anything inventive about Spiral, it’s that Jigsaw’s copycat points his arsenal of Rube Goldbergian death machines at bad cops. Usually, he selects random lowlifes and gives them a chance to reform. Here, he strings up cops who lie under oath to secure a conviction, shoot witnesses who agree to testify against officers, and contribute to police corruption. The movie might supply a mild catharsis for disenfranchised audiences accustomed to seeing headlines about unpunished crimes perpetrated by police. Even so, Spiral is a nasty movie that aligns with the “torture porn” expectations of copious gore, yet the scenes of extreme violence feel somewhat easier to take given that the screenplay (by Josh Stolberg and Peter Goldfinger) barely develops its victims. However, the series and even Jigsaw’s copycat remain incapable of confronting how slaughtering people in particularly gross ways doesn’t result in justice for anyone. By the time the killer’s identity is revealed, Bousman rushes headlong into the series’ signature twist ending, passing every opportunity to address the moral conundrum for an abrupt cut to the credits.

Rock’s presence makes Spiral better than the screenplay allows—though his performance is overly dependent on squinting like Clint Eastwood to show anger, confusion, or trauma. His acting barometer starts at Denzel Washington’s larger-than-life turn in Training Day (2001) and only goes up from there. He also attempts to inject humor into the situation, riffing on marriage and, of all things, Forrest Gump. But Rock’s bombastic good guy alone isn’t enough to distract from Spiral’s dependence on the Saw blueprint. It slightly resituates the events from the cop’s perspective and finds a relevant angle on contemporary social justice, but those are just surface-level changes. Thanks to Boseman and the writers, Spiral is like every other Saw movie in that it relies heavily on a flashback-laden plot structure, shocking gore, and a dull moral philosophy that does nothing to elevate the series.