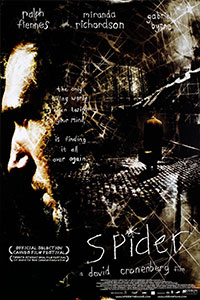 Spider is among Canadian director David Cronenberg’s most underseen, underrated, and yet sophisticated pieces of filmmaking. Released in 2002 and mostly overshadowed as of this writing, the film marks a transitional point in Cronenberg’s career, shifting away from his obsession with body horror and mind-body dichotomies into a focused interest in the psychological, which would preoccupy his career for the next twenty years. Based on Patrick McGrath’s 1990 novel of the same name, the adaptation occupies the patchwork mind of Dennis Cleg, played by Ralph Fiennes. A new arrival at a halfway house for the mentally disturbed after his stay in a psychiatric institute, Dennis, who goes by the titular nickname, weaves the loose strands of his memory and recreates them in his imagination. Strand by strand, he spins an understanding of his repressed trauma—the memory of a murder. McGrath wrote the screenplay, and Cronenberg explores the protagonist’s severe interiority through a subtle visual schema, supported by Fiennes in an understated and brilliantly committed performance of mumbles and micro-gestures. Spider unfolds through the lens of Dennis’ disturbed mind, fractured by Freudian neuroses. No other film in Cronenberg’s career has felt so entrenched in his protagonist’s subjectivity.