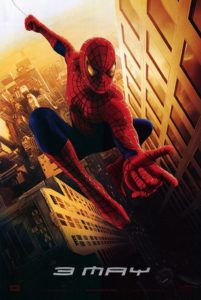 Spider-Man has always been the Marvel Universe’s Superman equivalent—a symbol of American ideals. But where Spidey excels is his human appeal. One of the first superheroes depicted as a teenager, the wall crawler grew with his audience from a high school student, to college grad, to teacher. With romance troubles via a string of girls ending with Mary Jane Watson, money problems, and scrapes at work with his loud-mouthed boss J. Jonah Jameson, Spider-Man’s alter-ego, Peter Parker, became just as interesting as the hero, and humanized the character for readers. A top-selling comic early on, The Amazing Spider-Man contained wry humor, colorful characters, and villains almost as popular the hero himself. Rights for a comic-to-film adaptation floated around Hollywood starting in the mid-1980s from Cannon Films, to Pathé, and eventually to Columbia Pictures. In the late 1990s, interest in the project reached its peak when the director of Aliens and The Terminator, James Cameron, was attached to direct and Leonardo DiCaprio was set to star as Parker. That news ultimately fell flat, and again Spider-Man remained stuck to his web in limbo. By the year 2000, pre-production began on Spider-Man and Columbia set Sam Raimi to direct.

Jurassic Park screenwriter David Koepp, one of the best writers working in Hollywood today, wrote the first draft. Soon after, writers Scott Rosenberg and Alvin Sargent adjusted Koepp’s script, notably concentrating it to one villain (Koepp originally included both Green Goblin and Doctor Octopus). Fruitfully combining Peter Parker’s growth with web-slinging action, the script elevates the source material without forgetting its comic roots. Grouping adult themes with comic book violence and tone, the writers constructed a reasonably accurate depiction of the character. While there are a few detractions from Spider-Man’s legend—such as the comic’s radioactive spider being a “genetically enhanced” spider on film, or Parker’s cartridge-based webbing in the comics now shooting curiously out of his wrist in the movie—the spirit of the series is dead-on.

If you don’t know the story, shame on you… Here goes anyway: a young Peter Parker is bitten by an engineered spider, which dons the otherwise fumbling character with super strength, a “spider sense,” accelerated agility, and the ability to shoot webbing from his wrists. Deciding to use his powers to earn money to impress his long-time love Mary Jane Watson (Kirsten Dunst), he enters a wrestling contest and wins. Just as the manager refuses to pay Parker, his prize money gets robbed by a hoodlum, and Peter stands aside. The thief gets away and ends up killing Parker’s surrogate father, Uncle Ben (Cliff Robertson), who tried to teach Peter that “with great power comes great responsibility.” Parker, feeling guilty about Ben’s death, decides to use his abilities to better the world and stop criminals like the one that killed his uncle. Meanwhile, Parker’s rich friend Harry Osborne (James Franco) moves in on Mary Jane. Harry’s father, Norman (Willem Dafoe), owns Oscorp, a company working on chemical performance enhancers for the military; the side effects include madness and aggressive tendencies. When his contract with the U.S. military is put at risk, Norman pushes forward testing by using himself as a guinea pig. The experiment results in Norman’s mind splitting in two. Norman’s other half becomes Green Goblin, a glider-riding, pumpkin-bomb throwing madman who only Spider-Man can stop.

The story superbly weaves between Spider-Man’s race to stop Green Goblin and Parker working up the grit to confess his love to Mary Jane. He must also remember his Uncle’s creed, which includes protecting his friends; this means that to protect Mary Jane, perhaps it’s best to never tell her how he feels. The last act leaves the audiences in throes, as the action story peaks and the dramatically tragic finale forces us to recognize the plight of the superhero—how realistically, no superhero can lead a happy life. Sam Raimi as director confirms the studio sought a fan-friendly picture, but also one coming from a confident, distinct voice. Not typically a name associated with blockbusters, Raimi credits include cult favorites like The Evil Dead series, Darkman, A Simple Plan, and The Gift—all pictures dark and somewhat unsuited for mass consumption. Raimi combines his dark artistry to give Spider-Man an edge, furthering the depth of the distressed character. His film concentrates more on the exploits of Peter Parker, which makes the superhero action all the more interesting. He adds a frenzied artistic quality to the actions scenes, with camerawork liken to his early work on The Evil Dead series.

Though an A-list studio picture, Raimi maintains impressive creative control over Spider-Man, such as including his car “The Classic” (an Oldsmobile Delta 88) as Uncle Ben’s vehicle; “The Classic” makes an appearance in every one of Raimi’s films. Raimi’s longtime friend (and star of the Evil Dead movies, where he plays the chainsaw-armed Ash) Bruce Campbell shows up as the wrestling announcer in the ring where Parker first attempts to use his newfound powers. Even Raimi’s brother Ted plays a newspaper employee at the Daily Bugle. While other directors may have been lost in the studio’s bustle for control over production, Raimi keeps his auteuristic trademarks intact. Even the film’s broad humor (the scenes with J.K. Simmons’ J. Jonah Jameson are hilarious and pitched to perfection) cracked with Raimi’s timing, making Spider-Man one of the most creatively entertaining pictures of its kind.

Casting came dangerously close to disaster when Nicholas Cage showed interest in playing Green Goblin and Freddy Prince Jr. was auditioning for the title role. But Raimi’s first choice for Parker was always Tobey Maguire, who impressed with his roles in smaller films like Wonder Boys and The Ice Storm. After watching him capture Peter Parker, it’s hard to imagine anyone else in the role. Though too old to play a high-schooler, Maguire’s boyishness fits in the early school scenes. He flawlessly squeaks nerdy lines with the awkwardness I always imagined Parker to have in the comic. Willem Dafoe, an off-beat choice for Green Goblin, contains the versatility to make even calming scenes creepy with the slightest movement of his eyes. And of course, there’s Kirsten Dunst, who, even though she received harsh criticism from internet fanboys, embodies Parker’s love Mary Jane (it’s amazing how well Dunst’s Watson calls Parker “tiger” in that delicate, endearing voice, avoiding any potential cheese associated with the nickname).

After the success of 2000’s X-Men, Marvel Comic filmic adaptations have saved the company from financial troubles, which in the late 1990s, were escalating into bankruptcy. Spider-Man exceeded expectations at the box office, making more than $403 million (currently listed as #7 in the all-time box office records). With impressive takes for both X-Men and Spider-Man, a slew of unworthy Marvel comic-to-film adaptations such as Hulk, Daredevil, The Punisher, and Fantastic Four were made—all underperforming commercially and artistically. Only web-head and the X-mutants upheld their integrity.

The talent involved in this picture becomes the defining point. Raimi, Koepp, Maguire, Dafoe, and Dunst impress beyond expectation—but then let’s not forget James Franco’s intense performance as Harry Osborn, or the pitch-perfect casting of Simmons as blustering J. Jonah Jameson, and Rosemary Harris as the dear Aunt May. Spider-Man thrives on being wholly audience-friendly, both also for die-hard fans of the comic and Raimi enthusiasts. (Though, I know that I’m not the only comic reader wondering why Green Goblin’s costume changed from a purple and green to a metallic robot-suit; that’s a minor quibble, one most comic fans have overlooked since the film’s release.) Raimi has combined his signature style spotlessly with the studio blockbuster formula, making a film that would normally have no chance at artistic integrity, but in his hands, plays like a comic book come to life—complete with a cartoonish, and often overlooked and underappreciated, pastiche that makes the picture enjoyable for adults and children alike.