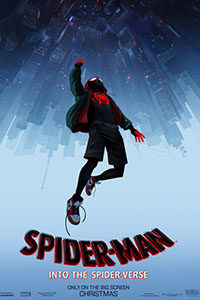 After three Spider-Man franchises in sixteen years, audiences have every right to be wary about yet another Spider-Man origin story. Especially one that introduces not just one new Spider-Man but welcomes several alternates to the web-slinging Marvel superhero—all in a single movie about a multi-dimensional rift and the various wall-crawlers that team together to repair it. Fortunately, or maybe not depending on your perspective, Sony Pictures’ Spider-Man: Into the Spider-Verse isn’t connected to the Marvel Cinematic Universe in which Tom Holland plays Spider-Man alongside Iron Man and the other Avengers. Nor does the film exist in the same continuum as the previous Tobey Maguire or Andrew Garfield versions, nor Venom, the absurd spin-off released by Sony earlier this year. It’s not even live-action—it’s breathlessly animated in a style that is unlike anything audiences have seen before. Not being connected to previous entries actually works to this movie’s advantage, since there are enough varying parallel dimensions to keep track of in this movie alone without the need for trying to make sense of where it should be situated within the complicated franchise history. Against all odds, Into the Spider-Verse ends up being an inclusive, post-modern take on the Spider-Man mythos that, through energetic animation and irreverent humor, communicates an odd message—that you too can be a Spider-Person.

The Lego Movie engineers Phil Lord and Christopher Miller produce, delivering another high-concept, hugely commercial project that deconstructs both standard animation styles and straightforward entertainment. Lord and Rodney Rothman penned the screenplay, which focuses on Miles Morales (voiced by Shameik Moore), a variant of Spider-Man introduced in the comics in 2011. A teenage boy whose parentage includes an African-American cop (Brian Tyree Henry) and a Puerto Rican nurse (Luna Lauren Velez), Miles represents an attempt to diversify the typically white model of Marvel superheroes. In the movie, though, Miles’ racial identity is less at the forefront of the text than it was in, say, this year’s Black Panther; it’s actually of little importance. When Miles and his uncle Aaron (Mahershala Ali) head into the subway system for some quality graffiti time, Miles finds himself bitten by a rogue radioactive spider. Miles gains all the wall-crawling and spidey-sensing abilities of Peter Parker, but with a few neat additions: he can turn invisible in dire situations and deliver an electric shock to his enemies. But just as Miles gains his powers and meets the original Spider-Man, he witnesses the friendly neighborhood hero killed by Kingpin (Liev Schreiber), who’s trying to open an inter-dimensional portal that could destroy all universes everywhere.

As it turns out, Kingpin’s experiments with his collider, created for him by Doc Ock (Kathryn Hahn), suck several Spider-Man equivalents from their respective universes into the one inhabited by Miles. Foremost is a sad sack version of Peter Parker (Jake Johnson)—distinguished as Peter B. Parker—whose relationship with Mary Jane Watson (Zoë Kravitz) is on the rocks, turning him into a chubby and unemployed loser. Alongside the spider-powered Gwen Stacy (Hailee Steinfeld), the down-on-his-luck Spider-Man help Miles learn how to use his newfound abilities. The best moments in Spider-Man: Into the Spider-Verse occur early on, however, when Miles first goes to high school after being bitten, and his paranoid spidey-senses make him ultra-aware of his awkwardness and pubescent sweat, while his spider-grip leads to a few devastatingly embarrassing encounters. In any case, Miles, Peter B. Parker, and Gwen join forces to stop Kingpin with the help of three other Spider-People from other dimensions: Peni-Parker (Kimiko Glenn) is a pseudo-anime character who uses a mechanized suit operated by a spider to fight crime; Spider-Man Noir (Nicolas Cage) comes from a gritty black-and-white dimension of 1940s crime; and Spider-Ham (John Mulaney) is a Porky Pig-esque version from a Looney Tunes universe, and instead of webbing he uses oversized mallets and falling anvils to fight. 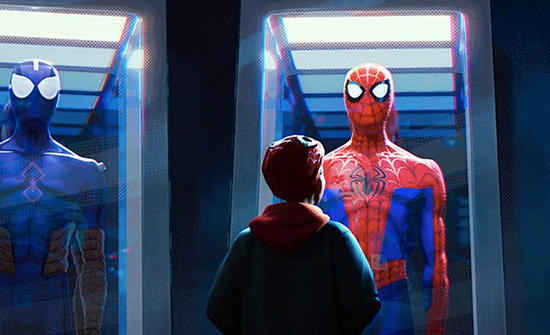 Into the Spider-Verse isn’t the kind of superhero movie that’s interested in cohesive origin stories or plot details that hold up to scrutiny. Consider the presence of Green Goblin who, unlike past iterations, isn’t the standard Norman Osborn who goes crazy after taking a secret formula only to become a glider-riding, bomb-throwing villain. Instead, the Green Goblin is a towering dragon that bears more of a resemblance to another Marvel villain, Fing Fang Foom. Why? Who knows. Just accept it and move on, the movie seems to say. Or ask yourself where the radioactive spider that bit Miles came from, and why it was labeled with a number? Maybe the writers added such details to intentionally deepen the mythology in future sequels; maybe the explanation was cut; or maybe this is a movie that races through its story without concern for specifics, which seems to be the most apparent option. Directors Bob Persichetti, Peter Ramsey, and Rothman maintain a breakneck pace so that, even if such details are shared, they’re done with such self-aware humor and speed that they’re easy to miss.

That’s part of the movie’s charm and fun, however—it’s willingness to leap headlong into an increasingly complex and expansive series of story flourishes without lingering on how they congeal. This fast-paced quality is supported by the unique animation, with its Ben-Day dots that give the movie a comic-book-come-to-life look, an element furthered by the appearance of thought-bubbles and comic frames throughout. It’s also enhanced by the intentionally exaggerated and cartoonish-looking designs that, occasionally, look as though they’ve been rotoscoped over real-life objects. Elsewhere, the mannerist style gives the characters an impossible shape, such as Kingpin’s appearance, as he looks like an enormous upright turtle. If there’s an aspect to the animation that doesn’t work, it’s the doubling effect applied to objects to make them appear out of focus—a touch recalling red-and-blue anaglyph format 3D. The result is a minor strain on the eyes, especially during the action sequences, some of which move with such speed that it’s difficult to discern a shot-to-shot logic. Nevertheless, the blend of animation styles throughout remains inspired, so that each set-piece has a distinct look, and the climax, a tad overlong, unfolds in a psychedelic, physics-defying world in which multiple universes begin to collapse into one another.

At once daring and silly in a free-wheeling way, Spider-Man: Into the Spider-Verse is an exciting and pleasant experience, full of unconventional story touches and an animation style that, while imperfect and scattershot, is relentlessly watchable. Much like this year’s Incredibles 2, it reminds audiences that perhaps a larger contingent of superhero fare belongs in the animated medium. Thematically, the movie’s last few lines remark on the importance of difference and inclusivity, a significant message for today’s combative times where marginalized groups are getting a prominent voice, while others try to prevent them from speaking. The otherwise well-meaning notion that “Even you can be Spider-Man” is silly, if only because if everyone is a superhero, then no one is super. It’s a hollow attempt to convince young viewers that Marvel has a superhero for everyone, which is hardly true. The movie’s forced messaging aside, it manages to be more than the easy cash-grab it could have been by supplying audiences with something uncommon, both within the superhero genre and in the medium of animation.