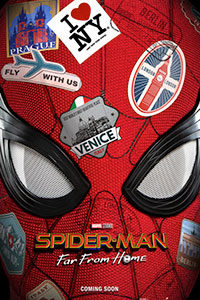 Spider-Man: Far From Home has the unfortunate task of following both this year’s Avengers: Endgame, the funerary capper on several Avengers storylines, but also its predecessor from 2017, Spider-Man: Homecoming. It’s a thankless position to be in, requiring director Jon Watts to deliver a worthy sequel, give audiences the chance to decompress after Endgame, and establish several plot points that will emerge in the next phase of the MCU. With Tony Stark dead and Steve Rogers now an elderly recluse, viewers don’t know what to expect from their cinematic universe. The next several MCU titles have yet to be announced, which seems to be part of the master plan concocted by Kevin Feige, the president of Marvel Studios, and the very idea of laying the groundwork for the future works itself into Far From Home. “Are the Avengers even a thing anymore?” one character asks. “Is there even a plan?” While answering these questions, the latest Spider-Man adventure feels like a trifle wrapped in a bauble—in the same way that last year’s Ant-Man and The Wasp cleaned palettes after the devastating Avengers: Infinity War. The themes of escaping superherodom factor into the European vacation storyline, while the stakes feel much more grounded after the intergalactic, time-traveling, multiverse effect of Endgame.

What works best about Far From Home are the small moments of humor and romance between the mostly high-school age characters. Opening with some perhaps-too-soon jokes about the death of Tony Stark and the aftermath of “The Blip”—the period between Thanos deleting half of the population from existence only for the Avengers to restore them five years later—the film finds Peter Parker (Tom Holland) returning to his comparatively simple life as a teenager. And yet, somehow, the film makes Peter’s teenage hormones seem more important than Thanos’ pursuit of the Infinity Stones. At the same time, each of his classmates serves as some brand of comic relief, from his best friend Ned (Jacob Batalon), who has a cute relationship with a new girlfriend (Angourie Rice) to the resident bully and social media obsessed Flash Thompson (Tony Revolori). Even adults are a constant source of laughs, such as his teachers (Martin Starr, J.B. Smoove) or the flirtation between Peter’s Aunt May (Marisa Tomei) and Tony Stark’s former assistant Happy (Jon Favreau), now assigned to Spider-Man. Despite all the levity, Peter’s class field trip to various European locales affords him the chance to forget about his alter ego and pursue a romance with the sardonic MJ (Zendaya). All the while, he questions what comes next, feeling unprepared for the responsibility of stepping into Iron Man’s shoes.

Peter’s vacation from his friendly neighborhood Spider-Man duties takes him to Venice, Prague, Berlin, and London, but it’s difficult to enjoy after a group of Elementals (monsters in the form of earth, wind, fire, and water) attack. Nick Fury (Samuel L. Jackson) heads a small opposition with the help of Mysterio (Jake Gyllenhaal), a crystal-ball-headed hero who flies and shoots green rays from his hands, and they enlist Spider-Man to assist. But the screenplay by Chris McKenna and Erik Sommers allows these first-act shenanigans about the bogus Elementals to carry on too long, assuming the audience doesn’t know that Mysterio is one of the web-head’s most iconic villains. Then again, perhaps the writers were right; audible gasps in my screening indicated that some were surprised by the reveal of Mysterio’s true intentions. At any rate, the writers have followed a similar villain template as Homecoming’s Vulture (Michael Keaton) and Iron Man 3’s Aldrich Killian (Guy Pearce)—characters who were wronged by S.H.I.E.L.D. or Tony Stark in earlier films and now demand satisfaction. It’s far from wanting to destroy half the population of the universe, but Gyllenhall’s performance makes the character more interesting than he’s written. 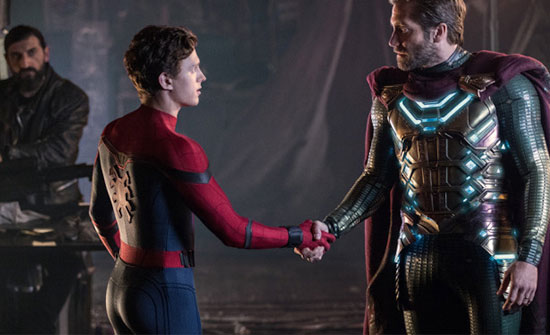 Watts keeps things moving between the road trip antics of Peter’s class and the gradual development of Mysterio’s disgruntled scheme, all of which feel secondary to the romantic comedy elements of Far From Home. The biggest moment of the film isn’t when Spider-Man ultimately proves victorious, but when Peter and MJ finally kiss. Still, Watts, who also directed Homecoming, visualizes some eye-popping action scenes using Mysterio’s weapon of choice: hundreds of hovering hologram projectors that produce photorealistic illusions. They’re convincing enough to fool Spider-Man and send the hero spiraling into a dazzlingly fun dreamscape, as the villain monologues in a series of cruel jabs at the relationship between Peter and his late mentor. Holland gives such a sympathetic performance that these moments ache. But Watts plays it fast and loose with the action, relying more on the pacing between battle scenes and high-school tomfoolery than story logic. By the end, Peter has spent so much time web-slinging around Europe, often without a mask, that there’s no telling why he still has a secret identity. (With the notion of secret identity in mind, it’s time to mention that staying until after the credits is a good idea.)

Looking back at the Spider-Man titles starring Tobey Maguire and Andrew Garfield, these films are only as good as their villains—they either give the protagonist some dimension or merely present a flashy bad guy to defeat, but hopefully both. Mysterio lends a certain deflated suspense to Far From Home because we know what’s coming. However, he presents a faux father figure, a sort of anti-Stark, whom Peter can defeat, and through that victory, move past the events in Endgame. Moreover, the filmmakers have established Mysterio as a Trumpian figure who, with a frightening blend of power and derangement, posits himself as the new, post-Iron Man source of heroism in the world. Of course, Mysterio’s truth is merely an illusion, part of a larger plan designed to exploit people’s fears and elicit their trust. “People need to believe,” he observes. “And nowadays, they’ll believe anything.” It’s a line that speaks to a specific plot point late in the film, but it’s also a not-so-veiled commentary about looking beyond surfaces to find the truth.

After three Marvel titles in five months (Captain Marvel, Endgame, and now this), viewers are bound to feel some level of exhaustion and oversaturation from two-hour-plus CGI extravaganzas. Fortunately, Far From Home is light and zippy enough to distract you from its modest advances for the characters and franchise. Its superheroes and villains are an afterthought to the charming romantic teen comedy setup, and its few comic-booky surprises leave us hungry for more. Like many entries in the MCU, it has a building block quality, making it filler that’s been lodged in-between more substantial and perhaps more significant entries. But at this point, the whole of the cinematic universe is greater than the sum of its parts, and watching the thing expand is part of the overall experience. Far From Home fulfills the predictably entertaining, crowd-pleasing requirements of a Marvel film, while also being incredibly funny and endearing. And Holland’s Spider-Man, the most heartwarming of all Marvel characters for his youth and innocence, makes the experience a pleasure.