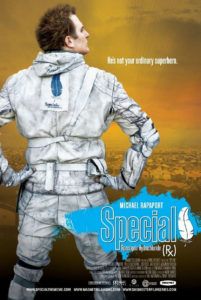 Sometimes I can hear people’s thoughts in my mind, their every unvocalized idea or reflection. But in crowds, the voices become too much and I have to run away to be alone. Most of my friends don’t believe I have super-powers. When I try and prove it to them, let’s say by hovering off the ground for a few seconds, it never works—probably because I’m too nervous to fly in front of others. And so, my powers are best reserved for when I’m alone, or tackling crooks in the convenience store, or running through walls, which always seems to give me a bloody nose.

None of this is true, of course. Rather, it’s what the main character from Special might journal, since he’s making a log of his experiences as a superhero. But he’s not really a superhero. He’s an underachieving parking cop named Les, and he’s played with an odd genius by Michael Rapaport, who exudes both hopeless defeat and bizarrely enthusiastic passion in his role. You see, Les, feeling a little underappreciated and hopeless like we all do at times, volunteered for an experimental pharmaceutical study testing a drug called “Special” that’s supposed to suppress his self-doubt. Unfortunately, it’s had some side-effects.

Instead of just allowing Les to function with a newfound confidence, the drug boosts his self-esteem beyond probable reality, making him believe he’s endowed with special powers. He’s an apparent fan of comic books, and perhaps the superhero model rubs off on his subconscious’ ideal for a stable psyche. The company’s Dr. Dobson (Jack Kehler) realizes there’s a problem right away and asks Les to stop taking the drugs, but Les hears the doctor’s “telepathic” voice in his head telling him that “they’re listening” and to continue to take the pills, because they’re giving him his powers.

Written and directed by Hal Haberman and Jeremy Passmore, the film proceeds on two levels that operate simultaneously, and hilariously: There’s the delusion in Les’ head, and the reality that he’s clearly a mentally ill individual. From Les’ perspective, he’s suddenly received these abilities that leave him with a responsibility to the world. He spray-paints a leather coat white and creates himself a costume that resembles a space suit, and then prowls about at night watching for crimes to prevent. He’ll randomly tackle people, believing them to be criminals. Meanwhile, the local news reports on a neighborhood wacko caught on camera sacking unsuspecting victims. People just see a nutjob walking about in a sloppy makeshift uniform, who runs into walls and who is evidently under the impression that he’s passing right through them.

Since he’s a superhero, there has to be an arch-nemesis, right? The pharmaceutical company is actually an independent operation run by two smug businessmen, Jonas and Ted (Paul Blackthorne and Ian Bohen), both hoping to be bought out by a larger corporation. They’re the “suits” out to stop Les before he exposes their obviously failed medicine. To Les, they’re evil men bent on destroying the world. During one confrontation with Ted, Les falls to the ground, blocked, he says, by Ted’s invisible force field. But suddenly Les disappears, and then reappears behind his enemy and socks him in the face. “Your force field is good,” Les proclaims, “But my teleportation is better.” The film is filled with wildly illogical and comical scenes.

This streaming dual reality purveyed by Special is enough to drive the wrong kind of viewer crazy, because we’re always switching back and forth between Les’ intense fantasy and the perceptibly dangerous situation of his bad narcotic reaction. Endless funny situations crop up that keep us amused at people’s reactions to his behavior, but then again, his actions alone are enough to incite hearty belly laughs. Rapaport, a supporting actor from films like Beautiful Girls and Mighty Aphrodite, contains an empty wit about his face that perfectly shows Les’ absence from our reality. The performance is riotous, and by the end even heartbreaking.

Shot on a shoestring budget with grainy digital photography and not-so-special effects, Special plays with superhero genre tropes and remains smart enough to offer audiences a pleasant-if-thoughtful diversion for barely 90-minutes. Despite its grand metaphor about little people with big dreams often having to give them up for a painful dose of The Real World, the film works better as a neat little indie comedy chalked full of goofiness.