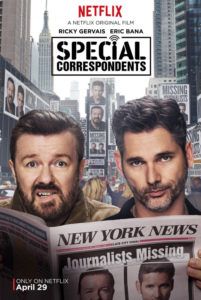 A potential for great satire goes squandered in Special Correspondents, Ricky Gervais’ remake of the 2009 French comedy of the same name. Having debuted at the Tribeca Film Festival, the Netflix-produced comedy belongs on the small screen, where the movie makes its world premiere. Though Gervais assembles a talented cast, his lifeless screenplay offers only a few genuine laughs, which comes as something of a shock. Just look at Gervais’ previous directorial efforts on The Invention of Lying (2009) and Cemetery Junction (2010); each exude a professionalism and passion that doesn’t exist here. While Gervais’ previous works prove to be both hilarious and heartrending, Special Correspondents feels like a throwaway project. Worse, it’s a terribly uneven satire that at times feels too over-the-top, and other times doesn’t go far enough.

Gervais stars as Ian Finch, a sound man devoted to his news radio gig and otherwise defined by his cowardliness, affinity for videogames, and superhero collectibles. Ian also spends a considerable amount of time drooling over the coolness of leather-jacketed reporter Frank Bonneville (Eric Bana), who owns the exclusive title of news radio bad-boy. When their boss (Kevin Pollak) sends the blatantly mismatched pair to cover an uprising in Ecuador, their trip is halted when Ian loses their cash and passports. Rather than face a potential firing, Ian suggests they hide out in the apartment of his dim-witted Mexican friends, Brigida (America Ferrera) and Domingo (Raúl Castillo), and send faux communiqués, complete with sound bites of gunfire and helicopters. Along with help from their new hosts, Ian and Frank stage their own political kidnapping, which means beaucoup ratings and some national intrigue.

Somehow, the intelligence community is unable to confirm their story as an elaborate prank sustained for almost a month. Meanwhile, Ian’s callous wife Eleanor (Vera Farmiga), who’s already slept with Frank before their ersatz trip to Ecuador, uses the kidnapping to launch her own celebrity. There’s a thin commentary about how the media exploits tragedy to create ratings and even a career, but the Eleanor character is so unbelievable that the commentary falls flat. All the while, we just know Ian will end up with his sympathetic colleague, Claire (Kelly Macdonald), who quietly defends Ian from his nasty wife. Amid annoyingly predictable and thin characterizations, Gervais’ satire becomes eye-rollingly absurd in its remarks about celebrity, while his jabs at the media aren’t sharp enough.

A grand media satire of this kind would normally be welcomed, though several missteps along the way defuse the potential acidity of its message. Issues of logic come to mind far too often. For example, no one thinks to track Ian and Frank’s cell phones, nor does anyone happen to notice them during their frequent escapades outside of the apartment in their poor disguises (sunglasses, hats, and silly shirts). Moreover, radio correspondents in today’s video-obsessed culture seem unlikely, as usually radio journalists would take video because their employers are owned by a larger media outlet with a television or web presence. At the same time, another correspondent played by Benjamin Bratt reports from Ecuador and appears as though he’s standing in front of a green screen. We cannot help but wonder if this is intentional—if he, too, has falsified his location—or if this is just poor filmmaking.

Shot between Toronto and New York, the movie at least feels like it was filmed on location instead of soundstages, giving the material a boost despite the obviously low-budget. Most of that budget was probably spent on the impressive cast, who were no doubt attracted by the prospect of working with Gervais. Who wouldn’t be? He’s one of the funniest people working today. (Although, his acerbic truth-telling persona, so welcomed during his hosting duties on the Golden Globe Awards, has recently been dealt a blow when he used his signature sarcasm in ads for Verizon.) His work on Special Correspondents feels lazy and rushed—a missed opportunity to evoke films like Network (1976) or perhaps more accurately Wag the Dog (1997). What could have been a witty comedic satire ends up not even being worthy of a lazy viewing.