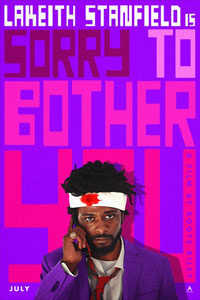 Boots Riley’s first film Sorry to Bother You exists at the intersection of radical Marxist activism and Dadaist art. It’s a feast of satire piled on top of satire, with a hearty dash of political commentary from the self-declared communist and Oakland-based rapper. Imagine a film that begins like Mike Judge’s Office Space by way of Michel Gondry’s frantic visual style, but then transforms into something else entirely, similar to Charlie Kaufman’s surrealism in Being John Malkovich, yet always with the sociopolitical insight of George Orwell’s Animal Farm. Keeping up with Sorry to Bother You’s various modes is, in a sense, its form-follows-function purpose. It’s about our culture’s uncanny ability to adapt to frightening change and, in the process, overlook the inherent dangers therein. Just as Riley’s audience acclimatizes to his film’s many gears, the viewer has already become painfully accustomed to the real-world’s institutionalized slavery in the form of sweatshops, the prison industrial complex, and capitalist organizations that expect utter devotion yet refuse to support the costs of living—conditions that have materialized over time so gradually that people barely noticed they have become slaves.

Riley implants such highfalutin and relevant concepts within a wildly funny and often exhausting motion picture, which debuted at the 2018 Sundance Film Festival, where Annapurna Pictures acquired it for distribution. His protagonist, Cassius Green (Lakeith Stanfield, from Get Out and TV’s Atlanta), whose name is pronounced “cash is green,” struggles to find a job. He finally lands a life-sucking position as a telemarketer at Regalview, where, among endless rows of cubicles in the building’s call center basement, he tries and fails to sell under the company’s production philosophy: “Stick to the script.” But Cassius becomes a top seller once he heeds the advice of a coworker (Danny Glover, whose character is “getting too old for this shit”). Cassius is told to use his “white voice” during calls. Cassius develops a new sound, hilariously dubbed by David Cross, and soon becomes a “power caller”—complete with a swanky new office and massive paycheck, as long as he maintains his white sound.

Meanwhile, in the lower depths of Regalview, the underpaid workers unite under the leadership of Squeeze (Steven Yeun), demanding fair wages in a series of protests. Detroit (Tessa Thompson), the avant-garde artist girlfriend of Cassius, joins the fight and reminds Cassius that he’s selling himself and his racial identity for the fat cats of Regalview. Worse, his cushy new job requires him to sell for WorryFree, a capitalist company determined to “save the human race” by offering exploited workers a lifelong contract in exchange for three meals a day and a cot. WorryFree’s indentured servitude becomes the ultimate capitalist exploitation machine, providing their cheap form of human labor to corporations that wish to become more profitable. Of course, WorryFree’s CEO Steve Lift (Armie Hammer) is the worst kind of douche bag, and his cocaine-snorting and orgy-hosting antics descend into far more disturbing revelations. 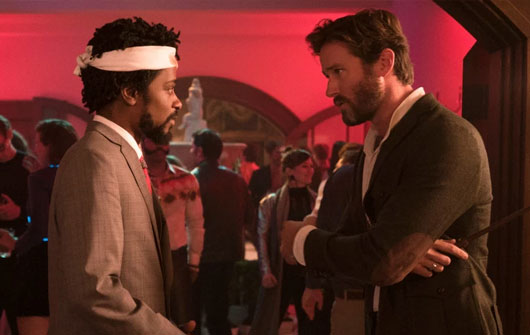 Shot on the cheap, Riley’s production bears an ambition that sometimes outweighs its craft. Countless random digressions and oddities pop up throughout Sorry to Bother You, and editor Terel Gibson never achieves a visual rhythm or pacing that results in a cohesive experience. Occasionally, the technical choices look downright awkward, such as an unwieldy sequence where Cassius uses his new income to upgrade his life, help out his fraught uncle (Terry Crews), and move into a new apartment with Detroit. The viewer gets the feeling that Riley is trying things to discover what works formally, as opposed to realizing a complete vision. Then again, part of what makes Riley’s message and story unified is the film’s ability to introduce increasingly wacky ideas. By the end, the quaint idea of an African-American telemarketer with a white voice seems almost cute, as the viewer has been dragged through a bizarre assemblage of visual gags and satiric asides with greater implications. This leaves Sorry to Bother You feeling occasionally sloppily executed, like a patchwork of imaginative if not altogether cohesive inspiration.

The satire of Sorry to Bother You bears much in common with Judge’s Idiocracy, a film that explored how stupid humanity would gradually become (and which has proven itself aching true since its 2006 non-release). For instance, the most popular show on television in Riley’s world is “I Got the Shit Kicked Out of Me,” where contestants are beaten on live television, while Judge’s world featured a show called “Ow, my balls!” of male contestants getting kicked in the crotch for laughs. Riley’s approach also recalls the frenzy of uncompromising ideas present in Spike Lee’s Bamboozled (2000), although Sorry to Bother You is far less likely to result in the outrage or the harsh accusations that befell Lee’s film. Just as Lee’s picture featured fans of a mock minstrel show dressing in ironic and problematic blackface, Cassius becomes a YouTube sensation after he’s struck in the head by a can of soda, leading fans to wear Afro-and-can wigs for Halloween. Most effective is the scene where Lift demands that Cassius perform a rap for an entirely white group of party attendees, despite the character’s insistence that he cannot rap. With the pressure on, Cassius mutters bad rhymes before finally delivering an N-word refrain that, when repeated by the enthusiastic white crowd, reveals the same poignant observation made in Bamboozled: that commercial representations of racism have the potential to bleed into reality.

Both Riley and Lee have a scattershot approach to their respective commentaries, offering tangential and off-putting details embedded into their narratives, which take unexpected turns—the sort that can’t be contained within an elevator pitch or movie trailer. (The third act of Sorry to Both You contains a doozy-of-a-twist, resulting in equal reactions of hilarity and horror.) Moreover, Lee’s film took place in the real world, and his characters had real emotions and everyday lives. By contrast, Riley uses the relatable occupation of telemarketing as a springboard for something altogether strange, dystopic, and filled with flights of science-fiction. His characters prove mostly unrelatable beyond what they represent within the film’s allegory, while his methods have a messy, chaotic brand of humor that cannot be easily digested on a single viewing. The relationship between Cassius and Detroit, for example, has none of the emotional weight it could and perhaps should have; the characters are cogs in the satire.

If the ultimate goal of Sorry to Bother You is to expose the big-money puppeteers controlling our culture and turning everyday people into corporate, even literal slaves, then Riley was mostly successful. Sometimes he makes his point heavy-handedly; other times, his heavy-handedness leads to an allegorical detail that proves outrageously unexpected. When we discover Steve Lift’s master plan, the reveal is unbelievable, weird, funny, unsettling, and unforgettable, making its point through a playful stop-motion animation sequence and some rejected costumes from the 1996 version of The Island of Dr. Moreau—a comparison that proves apt in more ways than merely the visual. As a comedic metaphor and reflection of our world as exploitatively capitalistic and dystopic, the film wavers and wobbles, offering huge laughs amid its various maneuvers and unsettled trajectory. Trying to make sense of Sorry to Bother You as it unfolds proves difficult, but that’s part of its manic genius. Riley asks us to stop, step back from our lives, and look at what’s happening around us, because it’s far too easy to get caught up in our surreal, ever-shifting, and troubling reality.