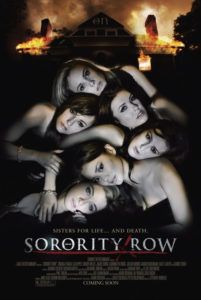 Sorority Row gives audiences an excuse to watch a group of spoiled coeds take off their clothes and get slaughtered. It’s never more complicated than that. Remade from the 1983 chiller The House on Sorority Row, though only credited as being based on Mark Rosman’s screenplay Seven Sisters, you’ve probably seen this slasher yarn repeated a dozen times over. Audiences unfamiliar with the original may recognize its likeness to I Know What You Did Last Summer or Prom Night. Same idea here: A killer builds a body count of trust fund babies who are too dense to call the police. In the end, the only smart one kills the bad guy. End of movie.

“Theta Pi, bitches!” That’s the subtle motto announced by the central group of girls, all seniors enjoying a college bash until their practical joke goes horribly wrong. They make cheating boyfriend Garrett (Matt O’Leary) believe that he’s killed girlfriend Megan (Audrina Patridge) by feeding her too many date-rape pills. Manipulator Jessica (Leah Pipes) leads her sorority sisters and the frantic Garrett out to a secluded spot to dump Megan’s not-dead body. The girls giggle about how they’ve fooled Garrett, until he pushes a tire iron through Megan’s chest to release the air in her lungs, so the corpse will sink in a nearby lake, and actually kills her. Panic ensues until Jessica convinces everyone to drop the body down an old mine shaft to protect their futures.

Forget the normally obligatory movie detective character. There’s no mention whatsoever of a police investigation. Some months later, just after graduation, each of them receives a text from someone who knows what they’ve done. Who could it be? Has Megan come back from the dead? Was there a witness? Is it Megan’s younger sister who conspicuously shows up to their end-of-year bash? Does it matter? Not really, not when the cloaked revenger begins taking out the sisters one by one with a blade-modified tire iron. Luckily, their shotgun-toting den mother (Carrie Fisher) shows up to protect them.

Much of the movie involves characters texting or taking calls on their cell phones. There’s nothing less cinematic than watching people incapable of removing their cell from their ear, unless your movie is directed by Martin Scorsese and it’s called The Departed. There’s endless talk about Facebook. The clothes are no doubt top fashion trends. Everyone is very hip and cool; even the one’s who aren’t so cool, they’re cool too. The cast includes an actress from MTV’s faux-reality show The Hills, if that’s any indication of how cool this movie’s trying to be. You’ll feel less cool by the end credits, because you probably aren’t as “connected” as these snobbish girls, all of whom refer to each other as “bitch” too often to be cute.

There are more memorable deaths than memorable characters, since the various sisters all blend together. Pipes stands out in her Queen Bitch role, however, making her inevitable death sort of satisfying. A concerning amount of oral retribution occurs, including one gruesome scene with a bottle and another with a flare, the latter in a flurry of bubbles. Most of the deaths come by way of the tricked-out tire iron being tossed like a throwing star. It’s all meaningless and sort of diverting, in the way only a popcorn-munching horror movie about babes and blood can be.

Despite his best efforts, director Stewart Hendler doesn’t find the desired tone once achieved in Scream—that balance between ironically funny self-referential humor and legitimate slasher scares. The script tries to move beyond its clichés but doesn’t come anywhere close to avoiding them. There are a few jump-scares, carefully engineered by jolting music, a dark cellar, and sudden impalements, but the script’s inane plotting proves to be embarrassingly dim-witted. No one expects a movie like this to be classy or smart, but some basics, such as likable characters and plausible scenario, would be appreciated.